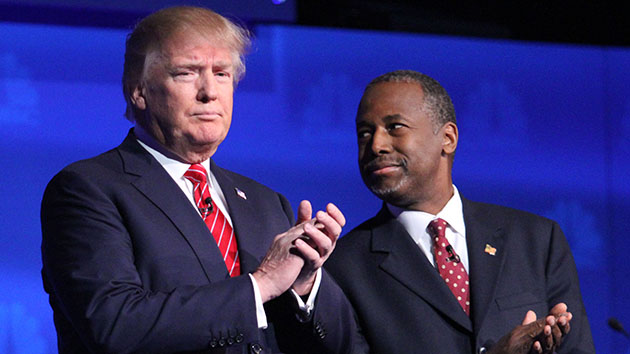 Colorado brownies, fashion critiques, fantasy football, and snide remarks on lectern placement: It must be another presidential debate.

On Wednesday evening, the top 10 Republican presidential contenders gathered in Boulder, Colorado, for the third GOP primary debate. Some of the candidates exchanged (verbal) blows. Jeb Bush took on the candidate he believes is the biggest threat to his campaign, his one-time protégé Marco Rubio. John Kasich challenged the policy proposals of several candidates on stage, provoking Donald Trump to tear into the Ohio governor’s record.

But the candidates spared their most venomous attacks for the moderators—CNBC’s John Harwood, Becky Quick, and Carl Quintanilla—charging that the mainstream media was untrustworthy and out to hurt the Republican Party and prop up Hillary Clinton.

Here are the highlights from the rambunctious debate:

Ohio Gov. John Kasich went on the attack against his fellow candidates as soon as he had a chance to speak, arguing that their proposals on budget issues and entitlements are unmoored from reality. “This stuff is fantasy,” he said at the onset of the debate. “Just like getting rid of Medicare and Medicaid. Come on, that’s just not—you scare senior citizens with that. It’s not responsible.”

The moderators egged him on and asked him to be more specific about who is offering up these fantasies. Kasich called out plans put forward by Ben Carson—a flat tax based on biblical tithing—and Trump’s plan to deport all undocumented immigrants. “Folks, we’ve got to wake up. We can’t elect someone who doesn’t know how to do the job,” he said.

Donald Trump took issue with the Ohio governor’s real talk and went for the jugular. “First of all, John got lucky with a thing called fracking, okay? He hit oil…That is why Ohio is doing well.”

Finally, Trump poured salt in the wound by noting that Kasich, due to his low poll numbers, was positioned on the far edge of the debate stage. “He was such a nice guy. And he said, oh, I’m never going to attack. But then his poll numbers tanked,” Trump said. “That is why he is on the end.”

Down with the MSM!

Rather than answer a question about raising the debt limit, Ted Cruz went on a tirade against the moderators, chastising them for treating the debate like a “cage match.” “You look at the questions: ‘Donald Trump, are you a comic-book villain?’ ‘Ben Carson, can you do math?’ ‘John Kasich, will you insult two people over here?’ ‘Marco Rubio, why don’t you resign?’ ‘Jeb Bush, why have your numbers fallen?'” he charged. “The contrast with the Democratic debate, where every fawning question from the media was, ‘Which of you is more handsome and why?'”

A few minutes later, Cruz made light of the standoff by offering to buy moderator Carl Quintanilla “a tequila…or even some famous Colorado brownies.”

As attacking the mainstream media shaped up to be the theme of the night, Rubio decided to get in on the action. After Trump warned against the dangers of super-PACs, Rubio spied his chance.

“Democrats have the ultimate super-PAC,” he said. “It’s called the mainstream media.”

The moderators get bullied

Midway through the debate, CNBC’s Quick teed up a pointed question for Trump. Republicans love to praise the ingenuity of Silicon Valley, but she noted that Trump has criticized Facebook founder Mark Zuckerberg for pushing immigration reform.

Trump was ready. “I was not at all critical of him,” Trump cut in, a moment of sincere confusion dawning on Quick’s face.

“Where did I see this and come up with this?” Quick wondered.

“I don’t know. You people write this stuff,” Trump responded, eliciting laughs from his competitors and the crowd and leaving Quick unable to respond. But after a commercial break, Quick had figured out the original source material: Trump’s own website.

With his campaign flailing as Rubio’s stock is rising, Bush decided to attack the man who was once his protégé. He criticized Rubio for missing a third of his votes in the Senate. But Rubio was ready with a comeback.

“But Marco, when you signed up for this, this was a six-year term, and you should be showing up to work,” he said. “What is it, like a French work week? You get, like, three days where you have to show up? You can campaign, or just resign and let someone else take the job. There are a lot of people living paycheck to paycheck in Florida as well—they’re looking for a senator that will fight for them each and every day.”

Rubio’s response: You didn’t attack McCain in 2008 when he missed votes to run for president.

“The only reason why you’re doing it now is because we’re running for the same position, and someone has convinced you that attacking me is going to help you,” he said.

The CNBC hosts wanted to know if Huckabee, a former governor of Arkansas who rails against coastal elites, thought Trump was too much of a New Yorker to represent the full country with “moral authority.” But Huckabee would have none of it, soaking up the boos of the crowd at the question. “As few questions I’ve got, the last thing I need is to give him some more time,” Huckabee said, before pointing out that his purple tie was made by Trump’s label. “Get over that one, okay.”

“Is it made in China or Mexico?” Bush chimed in.

“That is such a nasty question,” Trump interjected. It was unclear whether that was aimed at the moderators or at Bush.

After Bush was asked about his thoughts on whether daily fantasy football should be regulated by the federal government, Christie jumped in to cut off the moderators. “Wait a second. We have $19 trillion in debt, we have people out of work, we have ISIS and al-Qaeda attacking us, and we’re talking about fantasy football?” Christie asked with exaggerated incredulity. “Can we stop, can we just sadly stop?”

“Let people play, who cares,” Christie concluded. But the diatribe got Christie into a fiery mood. When CNBC’s Harwood interrupted Christie during a follow-up question about climate change, Christie erupted at the moderator.

“John, do you want me to answer or do you want to answer?” Christie said. “Because I’ve got to tell you the truth, even in New Jersey what you’re doing is called rude.”

The moderators pointed to Carson’s tenure on the board of Costco, which has been rated as an LGBT-friendly employer, while Carson has long been a foe of same-sex marriage. “Why would you serve on a company whose policies seem to run counter to your views on homosexuality?” the CNBC hosts asked.

“I believe that marriage is between one man and one woman. There is no reason that you can’t be perfectly fair to the gay community,” Carson said. “They shouldn’t automatically assume that because you believe marriage is between one man and one woman that you are a homophobe. This is one of the myths that the left perpetrates on our society. This is how they frighten people, and get people to shut up. That’s what the PC culture is all about, and it’s destroying America.”

Trump has already made America greater

Trump demonstrated his deal-making prowess by reminding everyone that he negotiated down the debate time with CNBC from three hours to two.

“These folks, CNBC, they had it down to three, three and a half hours,” Trump said, accusing the network of trying to draw out the debate so it could make money on advertising. “Everybody said it couldn’t be done. Everybody said it was going to be three hours, three and a half, including them.” He pointed at the moderators. “And in about two minutes I renegotiated it down to two hours so we can get the hell out of here. Not bad, not bad.”

“And I’ll do that with the country,” he added. “We will make America great again.”