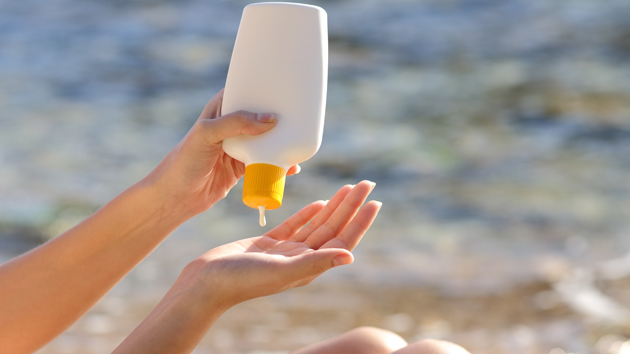 Earlier this month, scientists announced that the third global coral bleaching has begun—and that it could be the most destructive yet. The causes include the El Niño weather pattern, climate change, and the giant blob—and that’s on top of pollution runoff and overfishing already wreaking havoc on reefs. Now, a new paper in the Archives of Environmental Contamination and Toxicology by an international group of scientists adds another culprit: sunscreen.

Sunscreen can deform coral cells at a concentration as low as one drop in around 6.5 Olympic-sized swimming pools.

After gathering samples of adult and larval coral cells from reefs off the US Virgin Islands, Hawaii, and Israel, and exposing them to oxybenzone, the active ingredient in many sunscreens, researchers discovered that even the tiniest amount of sunscreen—washed off a snorkeler or flushed down a shower drain and into the ocean—can make the delicate coral polyp more vulnerable to bleaching. The chemical deforms coral cells, damages their DNA, and, most disturbing of all, disrupts coral larvae endocrine hormones causing baby coral to encase themselves in their own skeletons and die.

According to the report, every year as many as 14,000 tons of sunscreen enter water around coral reefs, often excreting oxybenzone, which protects humans from ultraviolet rays. Craig Downs, one of the study’s authors and the executive director of the Virginia-based Haereticus Environmental Laboratory, says oxybenzone can deform coral cells at a concentration as low as 62 parts per trillion—that’s one drop in around 6.5 Olympic-sized swimming pools.

About half of sunscreens on the market contain oxybenzone which, as Mother Jones has reported on before, may also be harmful to humans. The good news: More companies are now offering sunscreens that use mineral blockers such as zinc-oxide instead of chemicals like oxybenzone—and Downs says using these products could reduce harm to coral reef. (He notes, however, that not all non-oxybenzone sunscreens are safe, especially oil-based products often sold by natural brands. Downs’ team found that lavender, tea tree, jojoba, and other oils, which can act as natural insecticides, may kill delicate coral cells, as well.)

Normal coral cells are oblong and have lots of pigmentation (left) while those exposed to oxybenzone are less colorful, and their round shape prohibits proper growth (right). Archives of Environmental Contamination and Toxicology

Coral reefs are home to a quarter of the ocean’s marine life and are an important line of defense against storms for coastal populations. A recent attempt by the BBC to put a monetary value on the natural world’s flora and fauna estimated that coral reef is worth $9.9 trillion to the global economy, or more than half the GDP of the United States. That number included the value of the fishing and tourism economies that coral reef support, as well as its ability to sequester carbon and mitigate storm damage.

Yet coral reefs are rapidly disappearing: During the past 30 years, the world’s oceans have lost half of their coral reefs, including 80 percent of those in the Caribbean; some expect the remaining coral to completely vanish from that region within two decades. At least 10 percent of this reef is thought to be exposed to oxybenzone from sunscreen and other personal hygiene products.

Efforts to rebuild coral reef are underway, but they won’t work if toxic chemicals like oxybenzone continue to leach into these ecosystems, says Downs. “It’s a big ecological factor.”