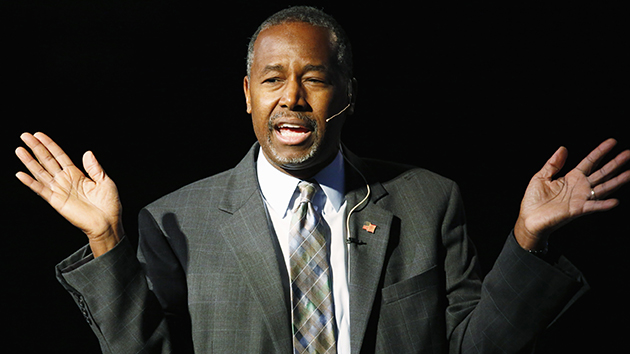 Ben Carson admitted Friday that a key piece of his storied biography—his oft-told tale of transformation from a poor kid with anger problems in Detroit to a world-famous neurosurgeon—was made up.

The Republican presidential candidate conceded Friday that he never received a full scholarship to the US Military Academy at West Point, after an investigation by Politico. In his book Gifted Hands, Carson recalls having dinner in May 1969 with Gen. William Westmoreland, who had just been in charge of US forces in Vietnam. Carson said that meeting led to a “full scholarship” offer from West Point.

But as West Point told Politico, the academy has no record of Carson ever applying to the school. Presented with this evidence, the Carson campaign admitted the story was false.

“Dr. Carson was the top ROTC student in the City of Detroit,” Carson’s campaign manager, Barry Bennett, told Politico. “In that role he was invited to meet General Westmoreland. He believes it was at a banquet. He can’t remember with specificity their brief conversation but it centered around Dr. Carson’s performance as ROTC City Executive Officer.”

Bennett continued, “He was introduced to folks from West Point by his ROTC Supervisors. They told him they could help him get an appointment based on his grades and performance in ROTC. He considered it but in the end did not seek admission.”

The circumstances of Carson’s meeting with Gen. Westmoreland are also unclear. Politico found that at the time Carson believes he had dinner with him, the general was actually in Washington, DC, playing tennis. It’s possible, Politico concluded, that the two met instead in February 1969, at a banquet that Carson, as a top student in his high school’s ROTC program, may have attended.

The Politico story comes a day after CNN published a story casting doubt on Carson’s description of himself as a violent adolescent and teenager, before he had a religious experience that rendered him the calm person America sees running for president today. Violent outbursts as a child are a central part of Carson’s personal story, most notably an episode in which Carson tried to stab a friend, only to have the knife break on his friend’s belt buckle. Though it did not disprove any of Carson’s accounts of violence toward friends and family, CNN did find that former friends and classmates knew Carson as a peaceful person and said it was hard to imagine him perpetrating the violent acts he claims he engaged in.

Carson pushed back against that story Friday, saying, “This is a bunch of lies attempting to say I’m lying about my history.”

Update: Carson’s campaign tells the Daily Caller that “the campaign never admitted to anything” and called the Politico story “an outright lie.”