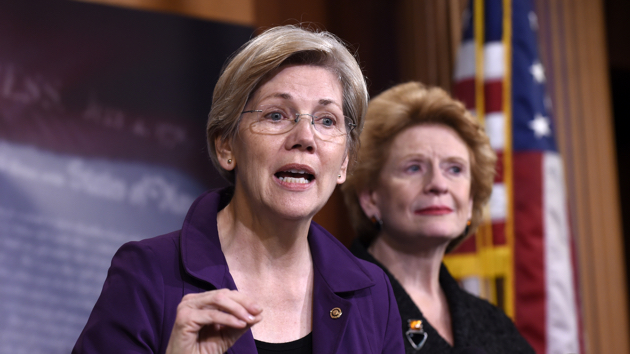 Confronting new research showing that women continue to earn far less than men for the same work, Sen. Elizabeth Warren (D-Mass.) called on Congress to pass legislation that would allow women to ask for male colleagues’ salary information without fear of being fired.

The liberal first-term senator spoke at an event on Capitol Hill unveiling a new report from the Economic Policy Institute (EPI), a progressive think tank, that highlighted the persistent wage gap between men and women. The report found that women are still paid about 20 percent less than men, and that the small decrease in that gap has occurred largely due to stagnant wages for men, not significant gains by women.

“Over the last several decades women have entered the workforce in record numbers and made great strides in educational attainment,” begins the report, written by EPI’s Alyssa Davis and Elise Gould. “Nevertheless, when compared with men, women are still paid less, are more likely to hold low-wage jobs, and are more likely to live in poverty.”

Warren broadly endorsed the group’s recommended policy solutions, including efforts to raise the minimum wage, increase pay transparency, and codify equal pay into the law. “What really chaps me about this one is that we have had a real fight on our hands to try to get through Barbara Mikulski’s Paycheck Fairness Act,” Warren said, referring to a bill introduced by the Maryland Democrat that would make it illegal for companies to pay men and women different amounts for the same work and would allow employees to share wages without fear of retaliation. “And the importance of the Paycheck Fairness Act is—a lot of people say that ‘I thought equal pay for equal work was already the law’—what they don’t realize is that half of all women in America work in jobs where they can get fired, just for asking how much the guy down the hall was getting paid for working the same job. That has to stop.”

Despite being more likely than men to graduate from college, women still earn less than their male counterparts. The EPI report also highlighted the broader stagnation in wages in recent decades that has affected men and women, and the need for salaries to increase across the board. The wage gap has closed a bit over the years, but EPI’s research found that almost half of that decrease has occurred because men’s wages have failed to keep pace with economic growth, allowing women to catch up slightly.

“In the context of both male and female median wage growth that lags far behind economy-wide productivity,” the report says, “reductions in the gender wage gap driven by stagnant or falling male wages cannot truly be considered progress.” If the wage gap had been eliminated by 1979 and pay had kept up with increases in productivity, the hourly wage would be more than 70 percent higher for the median woman right now, EPI found.

In terms of hourly pay, the median woman makes 82.9 percent as much as the median man, according to EPI. Women earn less than their male equivalents across education levels and job categories.

Things are particularly bad for women of color, with the median Hispanic woman earning just 58.9 percent and the median black woman pulling down 65.1 percent of the median white man’s wage.

“The one thing that always gets me is that in 2015, I still have to get out and say that we believe in equal pay for equal work,” Warren said. “It always gets a nice round of applause…but you really want to say holy guacamole, we can’t get this thing done?”

EPI offers a broad collection of ideas for fixing the problem, including a host of familiar liberal policies such as passing laws that would make it easier to unionize and instituting paid family leave. The report also points to gender discrimination issues that aren’t easily solved through simple public policy tweaks, such as the fact that “women are disproportionately steered toward careers or even college majors that provide a lower wage payoff.”

EPI urges companies to reveal existing pay gaps publicly. It also suggests that raising the minimum wage would help women. If the federal minimum wage were bumped up to $12 an hour from $7.25, 56 percent of the workers who would see pay gains would be women, according to the report. The benefits for leveling the pay gap would be even greater if the tipped minimum wage were increased. Two-thirds of workers who make the current minimum wage for people who also earn tips—a scant $2.13 per hour—are women.