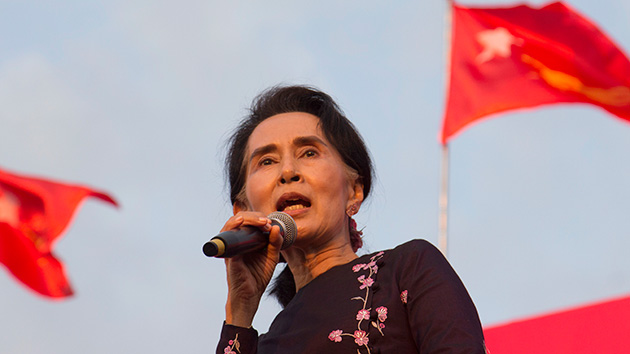 The people of Burma will head to the polls on Sunday in the Southeast Asian country’s first general election since a brutal military dictatorship stepped down from power four years ago. Here’s what you should know about Burma’s political situation and why the world is tuning in this weekend to see what happens:

Where is Burma? Burma—or Myanmar, as it’s also known—is a Buddhist-majority country almost the size of Texas, nestled between China and India. The country of 51 million people was once seen as the rice bowl of Southeast Asia, but during nearly half a century of dictatorship it became the region’s poorest country. Successive military regimes waged more than a dozen bloody wars against ethnic minorities—including the Karen people along the border with Thailand, as reported by Mother Jones‘ Mac McClelland—in addition to locking up thousands of journalists and political activists, and closing off the country from the international community. After a violent crackdown on activists in 1988, Burma made global headlines, and one of its main pro-democracy activists, Aung San Suu Kyi, shot to international acclaim, winning the Nobel Peace Prize in 1991.

Why is this election such a big deal? On Sunday, Burmese citizens will vote for lawmakers who will select Burma’s next president in 2016. It is expected to be the most credible general election the country has seen since before dictator General Ne Win seized power in 1962. (The last general election, in 2010, was rigged in favor of the military-backed party; the one before that, in 1990, was fair and led to a landslide victory for Suu Kyi’s opposition party, but the results were annulled by the junta and many pro-democracy politicians were imprisoned.)

In 2011, Senior General Than Shwe, who became the dictator in 1992, allowed a quasi-civilian government to take control. The new government, led by President Thein Sein, a prime minister under Than Shwe, embarked on a platform of reforms: It released hundreds of political prisoners, abolished prepublication censorship, and allowed Suu Kyi to run for parliament. The US government and other Western countries applauded the reforms by easing economic sanctions and re-engaging diplomatically with Burma. Companies like Coca-Cola and Gap Inc. rushed in to take advantage of the last untapped market in the region.

Governments (and corporations) around the world will be watching this election closely because they see it as a litmus test for Burma’s overall transition from dictatorship to a more democratic system, and an indicator of how stable the political and business landscape will be in coming years.

How “free and fair” will the vote likely be? The country’s army chief, Senior General Min Aung Hlaing, has publicly vowed to respect the results, and international observers have come from Europe and the United States to monitor the election. But the run-up to the vote has not been without problems. The country’s election commission is chaired by a former military leader. Suu Kyi, whose party is expected to see major gains in parliament, has said the voter lists contain “many, many errors” that will prevent her party’s supporters from casting their ballots. (Many eligible voters were not included on lists, while others who should be ineligible—because they’re dead—were.) As of Wednesday, the election commission was still struggling to finalize voter lists.

Many eligible voters were not included on lists, while others who should be ineligible—because they’re dead—were.

An estimated 4 million people—or more than 10 percent of the eligible voting population—will not be able to vote, whether because they lacked information to register or because they live in areas where it wasn’t possible for them to do so. In western Burma, a stateless group of persecuted people known as the Rohingya have been officially disenfranchised. In other conflict zones, ethnic minorities will not be allowed to participate in the election either, due to safety concerns and the election commission’s failure to cooperate with armed rebel groups. And analysts say residents in rural areas who have registered to vote are likely to follow the orders of pro-military village chiefs when it comes time to choose their candidates.

Nationally, a lack of voter education is also a concern. A study last year found that 44 percent of Burmese respondents incorrectly believed the president would be chosen directly by the people, rather than by lawmakers, while 36 percent said they did not know how the president would be chosen. “Access to information in many parts of the country is poor, while bans placed on campaigning are stifling the people’s ability to make informed decisions and exercise their voting rights,” Bo Kyi, a former Burmese political prisoner who leads an advocacy group in Thailand, tells Mother Jones. “For a free and fair election to occur, there has to be freedom of expression, adequate access to information, and freedom from fear.”

How democratic is the country today? Unlike changes in governments in the Middle East during the Arab Spring, Burma’s political transition has been top-down. Starting as early as the 1990s, Than Shwe and his regime began making plans to eventually allow a quasi-civilian government to take over. Now, though he’s no longer in the limelight, Than Shwe (and other military heavyweights) want to control how far the transition goes (and they say they’re aiming for a “disciplined democracy.”) Late last month, President Thein Sein said the country had seen enough political change. “We have changed from a military regime to a democratic government elected by the people,” he told supporters. “What more change do you want? If you want more, go for communism. Nobody wants communism, do they?”

“For a free and fair election to occur, there has to be freedom of expression, adequate access to information, and freedom from fear.”

The current government is dominated by former generals, and so is the parliament. In fact, 25 percent of seats in the legislature are reserved for unelected military representatives. That’s a big problem for reformers, because more than 75 percent of lawmakers are needed to approve any amendment to the military-drafted constitution, which gives the military special privileges in politics.

The constitution also makes Suu Kyi, the country’s most popular politician, ineligible for the presidency because her late husband was British and so are her two sons. Suu Kyi says she plans to lead the government if her party comes to power in the election, despite the constitutional ban. “Should you have to be president to lead a country?” she asked. “I will be above the president,” she told reporters in Rangoon this week, without offering concrete details. The election results aren’t expected until about two weeks after the vote, and parliament won’t decide on a president until next year, so until then, we’ll have to wait and see whether her plan plays out.

Why does the United States care about Burma’s election? To encourage reforms after the dictatorship stepped down, the United States eased economic sanctions that it had imposed on Burma in the 1990s. The Obama administration also installed a US ambassador in Burma and handed over hundreds of millions of dollars in development assistance. According to Ben Rhodes, a US deputy national security adviser and a confidante of Obama, the election this weekend will be an important factor in America’s decision about whether to fully normalize relations with Burma, including by lifting remaining sanctions.

In the United States, the Democratic Party also has something at stake in the election: In 2012, Obama became the first sitting US president to ever visit Burma, and he returned again in November last year. Hillary Clinton also visited twice during her tenure as secretary of state, and she’s touted US policy there as an example of her successful leadership. Burma’s election—and the extent to which it’s free and fair—will reflect in some ways on her foreign policy chops as she makes her bid for the White House. (For more on this, read my recent story about Clinton’s legacy in Burma.) The vote could have broader ramifications for American policy in the region, too. Given its strategic geographical position between China and India, Burma has been crucial in the US pivot to Asia. As Clinton explained in her 2014 memoir, “a meaningful reform process could become a milestone in our pivot strategy, give a boost to democracy and human rights activists across Asia and beyond, and provide a rebuke to authoritarian government.”

How can I find out about the results of this election and what they mean? Check out the English-language websites of Burmese news organizations like the Irrawaddy magazine (where I worked before joining Mother Jones), the Democratic Voice of Burma, or Myanmar Now, supported by the Thomson Reuters Foundation. Look for reports by Reuters and the Associated Press, which have consistently broken investigative stories about Burma’s political transition since 2011. On Twitter, watch for updates from journalists like Timothy McLaughlin and Andrew R.C. Marshall from Reuters, Thomas Fuller from the New York Times, Jonah Fisher from the BBC, Thin Lei Win from Myanmar Now, Poppy McPherson from Coconuts Yangon, or Burma-based freelancers Simon Lewis, Kayleigh Long, and Hanna Hindstrom. Also look for tweets by Burmese historian Thant Myint-U.