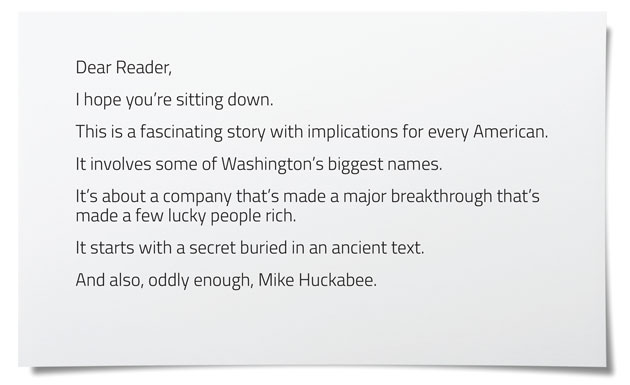 Last year, a man named Brian Chambers announced a world-changing advance: An international research organization called the Health Sciences Institute had found an incredible cure for cancer hidden in the Book of Matthew. For just $74, you, too, could discover the secret.

That was the breathless pitch emailed to hundreds of thousands of Huckabee’s followers in January, beneath a “special message” from the Republican presidential candidate trumpeting “important information.” Upon closer inspection, the divine remedy—eating fewer carbs—was never recommended by St. Matthew. Chambers is not a doctor, and the studies on starvation diets he cited make no mention of “cures.”

The Health Sciences Institute is part of a company called NewMarket Health, which is just one asset of a Baltimore-based publishing empire named Agora Inc. Agora’s subsidiaries and affiliates publish more than 40 newsletters and sell more than 300 books on a range of topics, including biblical health tips, natural-healing supplements, and “insider” investment advice—a mix of ideas the company considers the intellectual equivalent of the marketplace of ancient Athens. To find new readers for its ever-expanding catalog of publications, Agora’s subsidiaries have tapped into a network of conservative heavyweights, including Huckabee, Ron Paul, and Newt Gingrich, who sell access to their massive email lists to advertise Agora’s products.

Gingrich sent out more than a dozen Agora-related emails after he dropped out of the 2012 race, including one from an investment newsletter warning that Obama might seek a third term (sell, sell, sell!). In April, Paul appeared in a 51-minute video for an Agora subsidiary in which he argued that the United States was on the verge of martial law and societal collapse. The libertarian patriarch, whose own Survival Report newsletter once played to its white readers’ worst fears, urged viewers to buy a newsletter subscription to find out more. Conservative outlets including National Review and Townhall have also rented their email lists to Agora subsidiaries. While it’s not unusual for publications (including Mother Jones) to send sponsored messages to their subscribers, Agora’s emails skirt the line between spammy and scammy. An email sent last year to followers of the popular right-wing site RedState on behalf of the Health Sciences Institute claimed that the Obama administration was blocking a miracle cure that “vaporizes cancer in six weeks.”

These disingenuous endorsements for dubious products epitomize what historian Rick Perlstein has dubbed “mail-order conservatism,” the monetization of right-wing paranoia that started in the 1970s and has flowered ever since a secret Muslim socialist won the White House. Glenn Beck, like many of his talk-radio colleagues, has warned of the collapse of the global financial system while shilling for gold companies. Conservative operatives have created a booming field of “scam PACs,” political action committees that ostensibly raise money to help popular candidates but don’t produce much more than big checks for direct-mail firms. Confronted by Politico, Erick Erickson, RedState‘s editor-in-chief, said, “It horrifies me that the list sometimes get[s] rented to some of these guys.” And Agora has played the game of stirring up and cashing in on the conservative psyche longer and better than most of its competitors.

Agora was founded in 1978 by Bill Bonner, a Sorbonne-educated direct-mail guru who realized his natural gift while working for the National Taxpayers Union in the 1970s. The company estimates that its affiliates generate $500 million annually. Bonner and his wife own a 27-bedroom, 18th-century château outside Paris, a ranch in Argentina, properties in Ireland and Nicaragua, and “Maryland’s premier goat-cheese-producing rural estate.” Agora has also renovated 10 mansions in Baltimore. “These buildings reflect the grace and elegance of the 19th century,” Bonner told the Baltimore Sun. “They cause us to aim for a higher standard for our products and ourselves.”

Bonner recognized well before Donald Trump that paranoid populism can be sold with the trappings of prestige. His audience, he once told an interviewer, is people who “want to be richer, happier, healthier, more productive. We try to go directly to those emotional points.”

Agora founder Bill Bonner recognized well before Donald Trump that paranoid populism can be sold with the trappings of prestige.

One of Agora’s many holdings is the Oxford Club, an international investing society whose name evokes cognac and rich mahogany. Indeed, the perks of club membership include occasional soirees and access to one of Agora’s mansions and “outposts” in cities around the world. But the club’s origins are less refined. In the 1980s, a businessman named Joel Nadel founded the Royal Society of Liechtenstein. When the Better Business Bureau complained that this was a misleading name for a company headquartered in Boca Raton, Florida, Nadel switched to the Oxford Club. In 1991, the Postal Service froze nearly $7 million of Nadel’s assets on charges that he was running an illegal sweepstakes. Bonner pounced. He acquired the seemingly toxic asset and hired former Rep. Robert Bauman, a once-prominent Maryland Republican who had lost his seat after being accused of propositioning a 16-year-old male prostitute, to expand the brand. Somehow it worked.

The company’s big break came in the mid-’90s, when conservative angst over President Bill Clinton reached a fever pitch. An Agora subsidiary sent out a 116-page book titled Who Murdered Vince Foster? that framed the demise of the presidential lawyer as “the biggest financial story of our lifetimes.” Another pitch warned of a coming global plague “like the Black Death.” Gary North, a Christian Reconstructionist historian who works closely with Paul, came aboard as one of Bonner’s star writers. (Sample pitch: “Four Horsemen of the Modern Financial Apocalypse.”) In 1994, the company’s newsletter sales doubled.

(After this article was published in print, Bonner responded with a three-page letter, embedded below. He explained that the French chateau is a company training facility and the Maryland goat-cheese farm failed in the 1990s. The Agora founder did concede that the Biblical cancer cure email may have been “too bold” for his tastes, but argued that the boldness was what its readers were seeking. “[O]ur customers don’t pay us to be right,” he wrote. “And we’re certainly not paid to be timid. Instead, we’re expected only to be diligent and honest, and to explore the unconventional, the often disreputable, and always edgy shades of the idea spectrum. And our customers have the last say. If they don’t like what we offer, they don’t buy.”)

Agora and its subsidiaries have been accused of crossing the line between aggressive salesmanship and deception. In 2002, Frank Porter Stansberry, the editor of an Agora-owned newsletter called Pirate Investor, emailed 800,000 subscribers to suggest that he had “super insider” information on an imminent nuclear disarmament deal that could “double your investment dollar in a single day.” For $1,000, he would fork over the specifics. More than 1,200 copies of the report sold, for a net profit of $626,500.

“Our customers have the last say. If they don’t like what we offer, they don’t buy,” says Bonner.

The Securities and Exchange Commission accused Pirate Investor and Stansberry of fraud. The newsletters, the feds argued, “contain nothing more than baseless speculation and outright lies, fabricated to induce investors to pay Agora (or its subsidiaries) for subscriptions or purported inside information.” A document cited during court proceedings said that following this type of financial advice was “no better than throwing a dart at the stock quotes page of the Wall Street Journal and buying whatever it hits.” Although he had told his readers otherwise, Stansberry never acted on his own hot stock tip. Stansberry and his company were eventually ordered to pay $1.5 million in penalties and restitution. (Agora was cleared of wrongdoing.)

In 2011, Stansberry’s company paid a $55,000 penalty to the Social Security Administration for promising customers they could “get Social Security no matter what your age.” In 2012, the Food and Drug Administration warned Agora that a brand owned by another of its subsidiaries was illegally touting a health supplement as an anti-cancer drug. (The brand now describes the product as an immune system booster.) Last year, after an investigation by the nonprofit watchdog Truth in Advertising, Stansberry removed hundreds of customer testimonials from his company’s website and promotional materials.

But who needs customer testimonials when politicos come so cheap? Access to Huckabee’s email list reportedly cost NewMarket Health only about $1,000 for 300,000 addresses. When CNN asked the former Arkansas governor about the Bible­-cure email, Huckabee argued that he wasn’t responsible for sponsored emails sent out to his supporters. “My gosh, that’s like saying, ‘You run some ads on CNN, do you personally agree with all the ads that run on CNN?’ I doubt you do,” he told anchor Jake Tapper. Pressed further on the email’s “hucksterism,” Huckabee responded, “I didn’t actually run that part of my company.” But that email was just one of his recent endorsements of questionable products aimed at his fans. A few months earlier, Huckabee had taped an ad for a product that promised to cure diabetes using an item from your kitchen cabinet. Spoiler: It’s cinnamon.