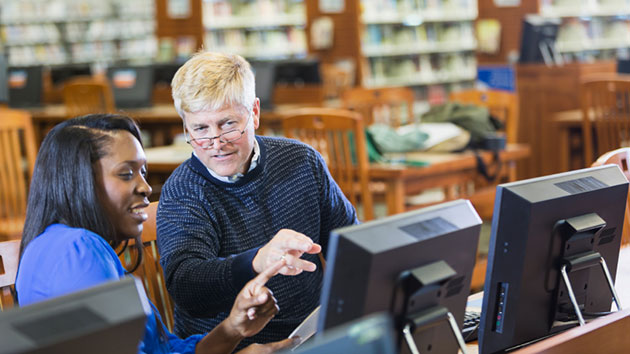 When President Barack Obama signed the new Every Student Succeeds Act earlier this month, many school leaders, education advocates, and policy makers of all stripes rejoiced. The new law replaces the troubled No Child Left Behind Act and, for the first time in almost 20 years, gives states much more flexibility to design their own grading systems and make their own decisions on how to improve struggling schools. Under NCLB, school quality was measured primarily by the results of standardized test scores; the ESSA encourages states to use multiple measures, including at least one non-academic metric like student feedback about their schools and teachers.

Now that the bill is signed, state educators are starting to try to figure out what these new measures of school quality might look like. But a group of nine school districts in California have already been quietly tinkering with a new school grading system of their own. In 2013, a collaborative of nine of the biggest school districts in California—in Los Angeles, San Francisco, Fresno, Garden Grove, Long Beach, Oakland, Sanger, Santa Ana, and Sacramento—got permission from the federal government to create their own formula for grading and improving schools. The timing was perfect, since all states are now scrambling to find more sophisticated models for measuring schools at a time when state funding is in short supply.

“I think what these districts are doing is pioneering work that’s really innovative and experimental,” said David Plank, the executive director of Policy Analysis for California Education who has been working closely with the CORE districts, as they are known. “CORE is trying to create a system that’s looking at schools deeply…including social and emotional learning.”

So, what’s new in the CORE school report cards?

Better academic data: Like the old system, what CORE calls the “School Quality Improvement Report Card” will still include academic factors like test scores in math and English and graduation rates. But CORE is working with a group of Stanford researchers at the John Gardner Center for Youth to make this data more useful for principals and teachers, according to Rick Miller, the executive director of CORE. For example, the state collects student attendance data, but right now that data only shows how many kids are going to school every day on average. “You might have 99 percent of students attending,” Miller said, “but in fact there are six kids who are chronically absent.” The new data will be able to point out to teachers the specific students who are consistently missing school, so the teachers could investigate the root causes behind absences and try to address them.

The state also collects high school graduation rates, but many students drop out in middle school. CORE is now collecting this information, as well as highlighting the names of individual students who are not on track to graduate on time.

Most states don’t have the funds to create more sophisticated data collection systems. But CORE saw that there was a lot of data already available; it just wasn’t always accessible.

Stronger equity lens: CORE’s new school grading system also goes beyond the current federal requirements on reporting data by subgroups such as race, English-language proficiency, poverty, and special education. The collaborative breaks up data into more detailed subgroups, including Native American, Filipino, and Pacific Islander students. And, by defining a subgroup as 20 or more students in a school, instead of the current minimum of 100, it pays attention to more students, says Jorge Ruiz de Velasco, the associate director of Stanford’s Gardner Center. For example, many San Francisco and Los Angeles schools have fewer than 100 African American students, which means that those kids’ achievement data was not always publicly reported, and their needs may have not been addressed.

Social, emotional, and school culture data: This is a largely uncharted territory in which CORE districts are doing some of the most innovative—and controversial—work. A growing body of research shows that social and emotional skills—such as resilience, self-management, growth mindset (a belief that effort matters more to progress in life than a person’s IQ), student engagement, and the ability to form relationships—contribute to success in life, the workplace, and college more than results on standardized test scores.

To try to gather this information, CORE is working with some of the country’s leading researchers in this field, such as Stanford’s Linda Darling-Hammond, the University of Pennsylvania’s Angela Duckworth, and Stanford’s Carol Dweck, to create surveys that can get to some specific information like a student’s persistence, self-awareness, or sense of belonging in a school. The surveys might ask questions like, “Do you feel supported in your classes?” “Are you engaged?” “Do you feel like you belong in this school?” Miller and de Velasco said the survey data could point to important areas, like improving relationships between students and teachers, instead of resorting to the same strategies that might have failed in the first place, like remedial tutoring and testing. “When a student is underperforming, maybe there is nothing wrong with the student,” de Velasco explained. “Maybe adults need to change their belief systems and how they relate to students and their families. Maybe they need to change how they teach or organize their time. Schools are driven by data as much as they are driven by beliefs about what students are capable of doing.”

But using student surveys to gather data on social and emotional skills that will be used to grade schools is still controversial. Experts like Duckworth have expressed concerns about using these surveys for making high-stakes decisions in evaluating schools or teachers. And there is the issue of subjectivity: Two students’ self-perception of their own resilience or self-awareness might be very different. Miller is aware of these concerns. “We may find that we don’t want to use surveys,” he said. “But we know that social-emotional skills like grit, growth mindset, and self-management are very important and worth paying attention to.”

Focus on collaboration and improvement, not punishment: When I spoke with Miller, de Velasco, Plank, and Ritu Khana (the assistant superintendent at the San Francisco Unified Schools District’s Accountability Office), all of them wanted to stress what they view as the most important paradigm shift in the new grading system: It is not set up for bureaucrats who then dole out one-size-fits-all mandates and punishments from afar. CORE wants to create a more nimble, granular set of data that teachers could use for continuous improvement throughout the school year, in addition to their own data from exams, essays, or student discussions and presentations. And they want schools that teach similar subgroups of students to collaborate and share best practices.

A more holistic, multidimensional system for grading schools is long overdue, but is there enough funding to support the analysis of all this new data and to make changes? “California’s schools are woefully underfunded,” Miller said. Even though the Golden State increased funding this year by 50 percent—from about $9,000 per student to about $13,000—California’s school budgets are still below those of many higher-spending states like New York and New Jersey. The good news is that the state government also approved $500 million in additional funding, earmarked specifically for teachers’ professional development. Legislators promised even more money next year. The state now also sends more money to schools teaching high numbers of low-income, foster youth and English-language learners, and it gives schools unprecedented flexibility in making decisions on how to use the money.

In February, the CORE collaborative plans to send their new school reports to all participating schools. Together, that means close to 1 million students. It remains to be seen what the principals and teachers will think of this latest innovation in school reforms. Miller says that if teachers think the current version is not working or has unintended consequences, the collaborative will keep making changes. “This is a work in progress,” he said. “There are reasons to trust that we are on the right path. But we need to keep working on this until we get it right.”