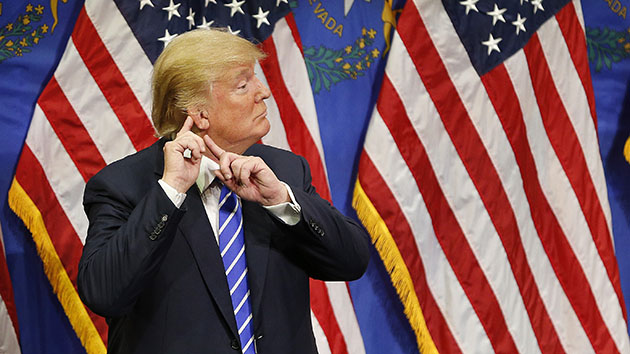 On Wednesday afternoon, Donald Trump, the GOP presidential front-runner, appeared on the internet-based talk show of Alex Jones, a so-called 9/11 truther who promulgates a wide variety of wild conspiracy theories. Jones heaped praise on Trump for being a modern-day George Washington who could save this nation before it falls into utter ruin in the next few years, and he begged Trump to vow that he will not pull out of the race (even under pressure from dark globalist forces). Trump, for his part, also heaped praise on Trump.

In touting his own national security credentials, Trump pointed to a book he published in 2000 called The America We Deserve. He noted that in this work, he brilliantly foresaw the threat posed by Osama bin Laden:

Really? Trump, in a 2000 book, fingered bin Laden as a primary threat who had to be neutralized, and he did this before others saw the Al Qaeda leader as a danger?

Okay, by now you know where this is heading. In the Kindle version of this book, there is no index. But according to the search function, there is only one—yes, just one—brief reference to Osama bin Laden or Al Qaeda in the entire book. Here it is:

Instead of one looming crisis hanging over us, we face a bewildering series of smaller crises, flash points, standoffs, and hot spots. We’re not playing the chess game to end all chess games anymore. We’re playing tournament chess—one master against many rivals. One day we’re all assured that Iraq is under control, the UN inspectors have done their work, everything’s fine, not to worry. The next day the bombing begins. One day we’re told that a shadowy figure with no fixed address named Osama bin-Laden is public enemy number one, and U.S. jetfighters lay waste to his camp in Afghanistan. He escapes back under some rock, and a few news cycles later it’s on to a new enemy and new crisis.”

That’s it. Nothing prescient. Nothing that was not known publicly at the time. Nothing about putting bin Laden on the top of the national security to-do list. In the book’s opening chapter, Trump did note, “I really am convinced we’re in danger of the sort of terrorist attacks that will make the [1993] bombing of the Trade Center look like kids playing with firecrackers.” But he did not connect this to bin Laden. And in the book’s short chapter on terrorism, Trump had no mention of bin Laden or Al Qaeda. He focused instead on the terrorist threat—such as a “biobomb”—posed by the governments of Iran, Iraq, Libya, and North Korea. And he proposed “The (Trump) National Security Lottery,” which “would sell tickets just like in a Powerball Lottery, but dedicate every cent to funding an anti-terrorism campaign.”

So Trump is wrong. In this book, he did not predict the rise of bin Laden. He and his co-writer were simply riffing off the clips of the day.

Not surprisingly, Jones did not call out Trump on this. Instead, he cheered on the tycoon and said Trump’s campaign is “epic.” Trump repaid the compliment. As the segment was ending, he told Jones, “Your reputation is amazing. I will not let you down.”