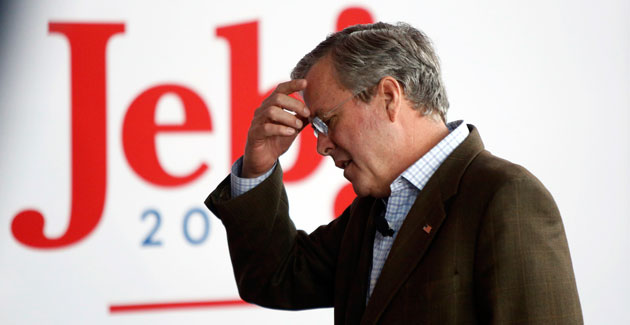 A liberal watchdog group has filed a complaint with the Federal Election Commission charging that the super-PAC supporting Jeb Bush, Right to Rise, received contributions from companies that were used to shield the identities of the donors. The six-figure donations from these mysterious entities—one of which has ties to an investment firm run by a Bush relative—were first reported by Mother Jones.

The complaint, submitted by Citizens for Responsibility and Ethics in Washington (CREW), requests an investigation into Heather Oaks LLC and TH Holdings LLC, which each contributed $100,000 to Right to Rise last winter. As Mother Jones reported, each of these firms—which are limited liability corporations (LLCs)—appears to have virtually no real-world presence or assets, suggesting they may have been used as a conduit by donors seeking to keep their fingerprints off these contributions. Under current campaign finance laws, it’s legal for a corporation to donate to a super-PAC. But if a corporation or individual makes a donation through a company to hide their identity, that’s a potential violation of campaign finance law.

“After the various court decisions, corporations are allowed to donate a lot of money, but what you can”t have is a situation where it appears that an individual is using a corporate structure merely to make a pass through,” says CREW’s executive director, Noah Bookbinder. “And what you have here is two LLCs where it doesn’t look possible that they have any other source of money.”

When TH Holdings was incorporated in New York in 2010, it listed no registered agent, physical address, or shareholders. However, when it made its $100,000 donation to Right to Rise on February 26, it used the address of Neuberger Berman, a Wall Street investment firm that was formerly part of Lehman Brothers and is now led by George Walker IV, Jeb Bush’s second cousin. Both Walker and a spokesman for Neuberger Berman denied to Mother Jones that the Wall Street firm had made the donation.

The trail appeared to go cold there. However, CREW discovered tax assessment records that provide additional clues. Shortly after its incorporation, TH Holdings purchased land in the Hamptons, on Long Island. According to current tax records, the point of contact for TH Holdings is Marvin Schwartz, who happens to be the vice chairman of Neuberger Berman. Schwartz, who did not respond to a request for comment, is a legendary Wall Street investor. He has attended various fundraising events for Jeb Bush, including a retreat this summer for high-level donors at the Bush family compound in Kennebunkport, Maine. Schwartz has donated $5,400 to Jeb Bush’s official presidential campaign but is not listed as a donor to the pro-Bush super-PAC.

“If, as it appears, TH Holdings LLC did not generate any income, and the funds for its $100,000 contribution to Right to Rise USA in fact came from Mr. Schwartz, then the contribution was made in the name of another in violation of the law,” CREW’s complaint alleges.

CREW makes a similar accusation against Heather Oaks LLC, which donated $100,000 to Right to Rise in early March 2015. The address the company listed on its donation to the super-PAC traced back to a shopping mall in Birmingham, Alabama. But, as Mother Jones reported, there is no Heather Oaks LLC in Alabama. According to Alabama state records, Heather Oaks closed more than 10 years ago. But CREW’s complaint reveals that a company by the same name was registered in Delaware two weeks before the donation was made. “Heather Oaks, LLC does not have any known business activity, and it is highly unlikely the company generated sufficient income to pay for the $100,000 contribution in two weeks,” the complaint alleges.

The CREW complaint charges that the Right to Rise super-PAC and its attorney should be investigated to determine if they knew the true source of these donations.

Paul Lindsay, a spokesman for the super-PAC, sarcastically dismissed the complaint. “CREW is so adorable with their baseless complaints against conservative organizations,” Lindsay says. “RTR fully complies with all FEC regulations and will continue to do so.” The super-PAC’s attorney, Charlie Spies, declined to comment.

In 2011, watchdog groups filed similar complaints with the FEC against two LLCs that made large donations to a super-PAC backing Mitt Romney. The FEC, which for years has been paralyzed by partisan gridlock, does not reveal the status of its cases, but it appears those complaints are still open. That suggests quick action on CREW’s allegations is unlikely. “Certainly there’s a great degree of dysfunction with the FEC right now, but we don’t think that’s a reason to stop asking the FEC to do it’s job,” Bookbinder says.