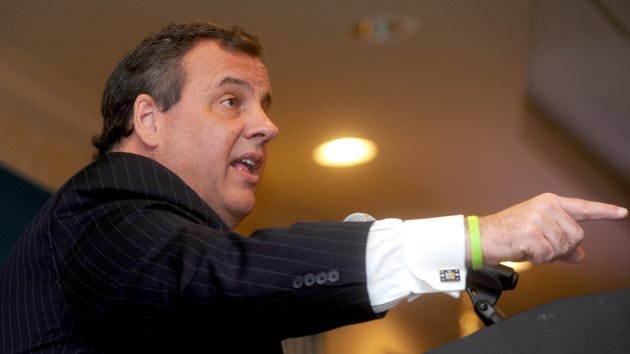 Days after a mass shooting in San Bernardino, California, killed 14 people, and one day after President Barack Obama called for more gun safety measures in a speech addressing the attack, GOP presidential candidate Chris Christie bolstered his support of gun rights. As news surfaced that the assault weapons used in San Bernardino were purchased legally due to a loophole in California’s assault weapons ban, Christie said during a radio interview that Obama’s call for limits on assault weapons was “absurd.”

This was one of the New Jersey governor’s many recent efforts to showcase his pro-guns stance. Last month, he conditionally vetoed a bill that would have made it harder for domestic abusers to own guns. He also recently vetoed a bill that would have required law enforcement to be notified when a person who had been institutionalized for mental illness seeks to expunge his mental health record when applying for a gun permit. And in the past year, he pardoned five people in New Jersey who were charged with unlawful possession of a firearm.

But for most of his two decades in politics, Christie has been a supporter of gun safety measures. In 1993, during his failed campaign for state Senate, he cited Republican efforts to repeal New Jersey’s assault weapon ban as his inspiration for entering politics. He repeated his support of the assault weapons ban in 1995 when running for the state Assembly. In his 2009 gubernatorial campaign, Christie voiced his opposition to a federal bill that would have made it easier for permit holders to carry firearms across state lines. As governor, he signed nearly a dozen pieces of legislation restricting guns in 2013, including one that barred individuals on the federal terror watch list from obtaining a permit to buying a gun in New Jersey. His consistent support for gun control has earned him a C, the lowest rating from the National Rifle Association among the top GOP presidential candidates. In 2014, New Jersey was voted one of the worst states for gun owners by Guns & Ammo magazine.

Yet late last month on CNN, Christie refused to express support a proposed bill in Congress that seeks to close this same terror watch list loophole nationwide, saying that he believes this sort of rule-making should be left to states.

When he’s been questioned about his newfound support of gun rights, Christie has insisted it’s an authentic evolution. “I have grown up a bit and changed my view and been educated on it,” Christie said on Face the Nation last Sunday, when asked about his previous support for an assault weapons ban. Christie said his views began to change when he became a prosecutor and saw that firearms are necessary for law enforcement to manage crime.

Though the NRA has yet to revise its rating for the candidate, Christie has won critical support in New Hampshire—a key primary state and also a GOP electorate that tends to oppose stricter gun control. Last month, Christie won the endorsement of the state’s largest newspaper, the New Hampshire Union Leader. He’s since been endorsed by the state’s House and Senate majority leaders, and several other political figures.

Christie’s revamped position on guns seems to have convinced many of New Hampshire’s leaders that he could win a pro-gun constituency. But the most fervently pro-gun groups in the state aren’t sold. On Wednesday, the New Hampshire Firearms Coalition, one of two major gun rights groups in the state, sent an email blast to its members warning them to be wary of Christie’s purported Second Amendment bona fides.

“Don’t be fooled!” writes NHFC in its message, outlining Christie’s pro-gun-control history. “The truth is Chris Christie has been an anti-gun activist for his entire political career…Being pro-gun is doing the right thing when no one is looking.”