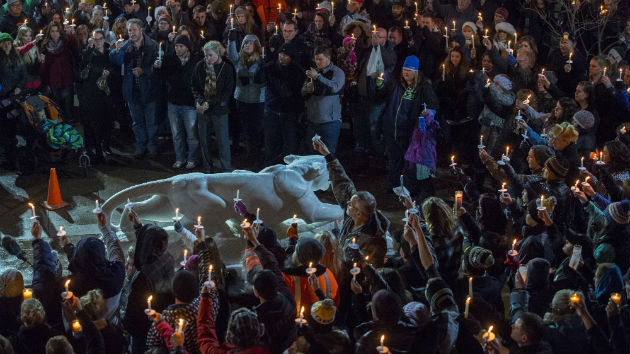 Mourners attend a vigil at the University of Colorado for those killed at a Planned Parenthood clinic on Friday. Christian Murdock/AP Photo

Three people died and nine others were wounded on Friday after a gunman opened fire at a Planned Parenthood clinic in Colorado Springs, Colorado. Gov. John Hickenlooper on Sunday called the shooting “a form of terrorism” and said the United States needs to do more to “keep guns out of the hands of people that are unstable.” Police have said a full investigation will take at least a week, but additional information about the hours-long attack continues to come to light.

Here are some of the key facts:

The Attack: On Friday morning, police received a call about an active shooter near the Planned Parenthood facility in Colorado Springs. Officers exchanged gunfire with the man, who then made his way into the clinic with what’s been described as an assault-style rifle. The man eluded law enforcement for five hours but was apprehended after authorities smashed through the doors of the clinic in an armored vehicle.

The Suspect: The alleged gunman has been identified as Robert Lewis Dear, 57. Described by his neighbors as a loner and someone “you had to watch out for,” Dear had several previous run-ins with the law. They include two “personal intrusion” (Peeping Tom or eavesdropping) charges that were dropped, and two charges of animal cruelty for which he was acquitted. Dear is being held without bond on charges of first-degree murder at the El Paso County Criminal Justice Center. He made his first court appearance on Monday through a video feed as relatives of some of his alleged victims watched from the courtroom seats.

The Possible Motive: Multiple news outlets have reported that Dear mentioned “no more baby parts” in a statement taken by law enforcement after he was in custody. Though Dear’s motives for the attack have not been confirmed by investigators, “baby parts” is a clear reference to the widely debunked series of videos released earlier this year that show Planned Parenthood staff talking about fetal tissue research.

The Victims: One police officer and two civilians were allegedly killed by Dear during the attack. The officer has been identified as Garrett Swasey, 44, who was a six-year veteran of the force and worked for the University of Colorado-Colorado Springs. Swasey left the campus to respond to the shots-fired call. The two civilians have been identified as Jennifer Markovsky and Ke’Arre Marcell Stewart. Stewart, a 29-year-old father of two, was an Army veteran who served a tour in Iraq. Markovsky, a 35-year-old Hawaii native and mother of two, had reportedly gone to Planned Parenthood to offer support to a friend.

The attack is the most recent example of a dramatic increase in violence against abortion providers that has taken place since July. Harassment, violence, and threats of attack have shot up ninefold since the video series was released.