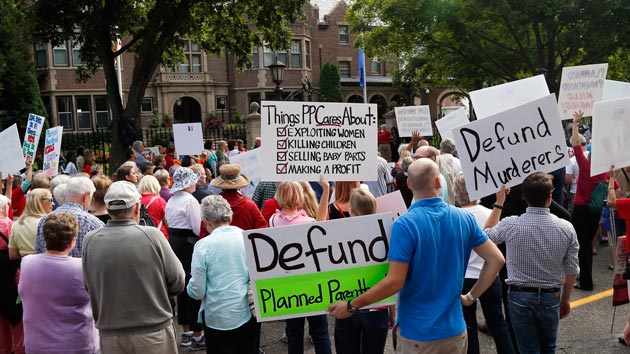 On July 14, anti-abortion activist David Daleiden and his nonprofit Center for Medical Progress (CMP) released a series of secretly recorded and deceptively edited videos purporting to show Planned Parenthood officials discussing the sale of fetal tissue—a practice that is illegal. The videos have since been widely discredited, but they set off a nationwide offensive against Planned Parenthood that made 2015 one of the worst years ever for the nearly 100-year-old reproductive and women’s health care organization.

Responding to the videos, Planned Parenthood emphasized that the discussion that had been covertly filmed concerned the costs of storing and transporting fetal tissue, which can be recouped according to federal law. The group also hired a research firm to examine the editing of the videos. When the firm concluded that the videos had been extensively and deceptively edited, the CMP dismissed these findings as “a complete failure” and an attempt at distraction.

The doctored videos monopolized the abortion debate for the rest of 2015. They inspired efforts to defund Planned Parenthood in six states, investigations of the women’s health provider in seven states (all have so far found no evidence of fetal tissue sales), and the creation of a special investigative committee in Congress. In October, Planned Parenthood announced it would stop taking any reimbursements for fetal tissue donations and would pay for their storage and transport instead. Fetal tissue donation is legal in the United States, and it’s critical for medical research.

The next month, a shooting attack at a Colorado Springs Planned Parenthood killed three people and injured nine. The alleged gunman, Robert Lewis Dear, said “no more baby parts” during his arrest. When he appeared in court, he shouted, “I am a warrior for the babies,” but authorities still hesitate to confirm the widespread suspicion that Dear’s actions were connected to the controversial videos.

“One of the lessons of this awful tragedy is that words matter, and hateful rhetoric fuels violence,” Dawn Laguens, the executive vice president of Planned Parenthood Federation of America, said in a statement after the shooting. “It’s not enough to denounce the tragedy without also denouncing the poisonous rhetoric that fueled it.”

Here’s a look back at some of the significant events from the past year in the relentless war against Planned Parenthood:

On September 29, Planned Parenthood’s president, Cecile Richards, was called to testify before a House government oversight committee. Led by Chairman Jason Chaffetz (R-Utah), House Republicans grilled Richards for more than four hours about how her organization spends its federal funding. Chaffetz frequently cut Richards off when she was replying to his questions, and he suggested throughout the hearing that Planned Parenthood should be stripped of its federal funding. A number of the committee Democrats accused the Republicans of misogyny and discrimination against women. “My colleagues say there is no war on women,” said Rep. Gerald E. Connolly (D-Va.). “Look at how you’ve been treated, Ms. Richards.”

Chaffetz also presented a chart at the hearing suggesting that in 2013 Planned Parenthood performed more abortions than life-saving procedures such as cancer screenings. Many media outlets point out that this implied conclusion was completely wrong. Below is Chaffetz’s chart alongside a properly scaled version from Mother Jones blogger Kevin Drum: 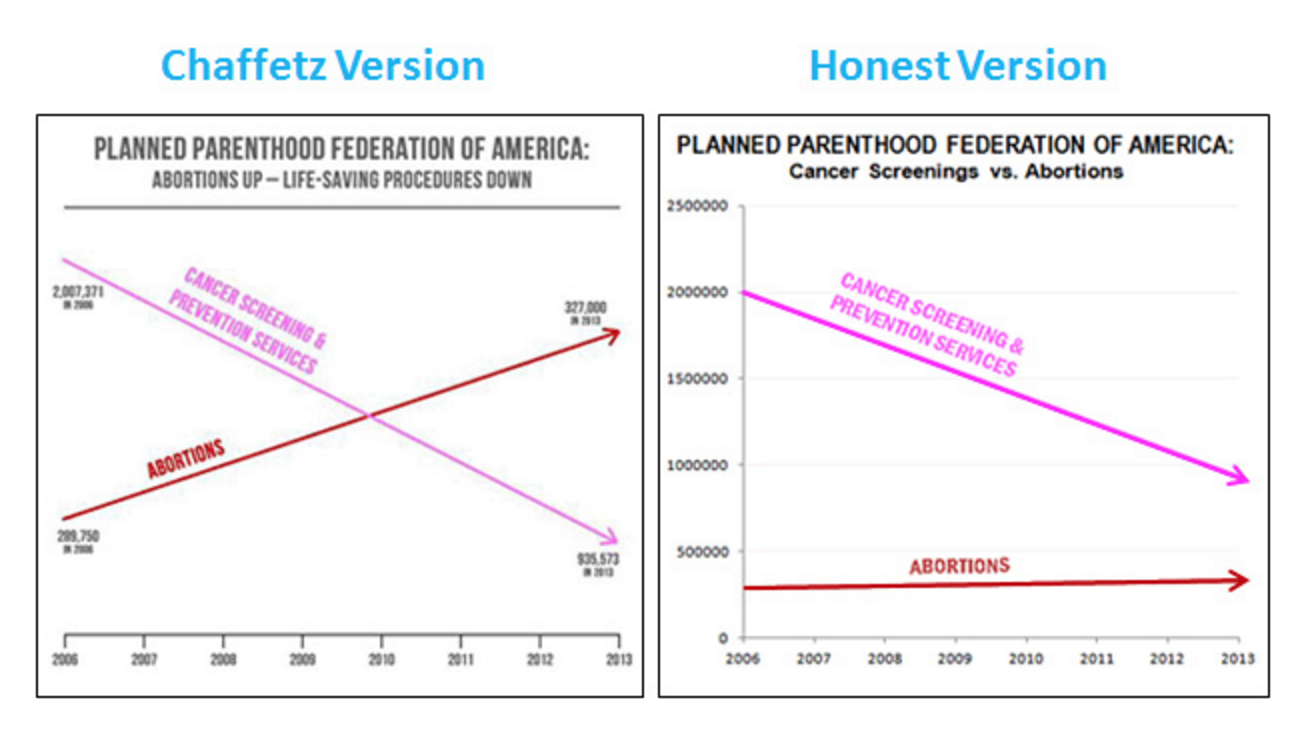 And if the chart were to include the testing for sexually transmitted diseases and the contraceptive services provided by Planned Parenthood, it would look like this: 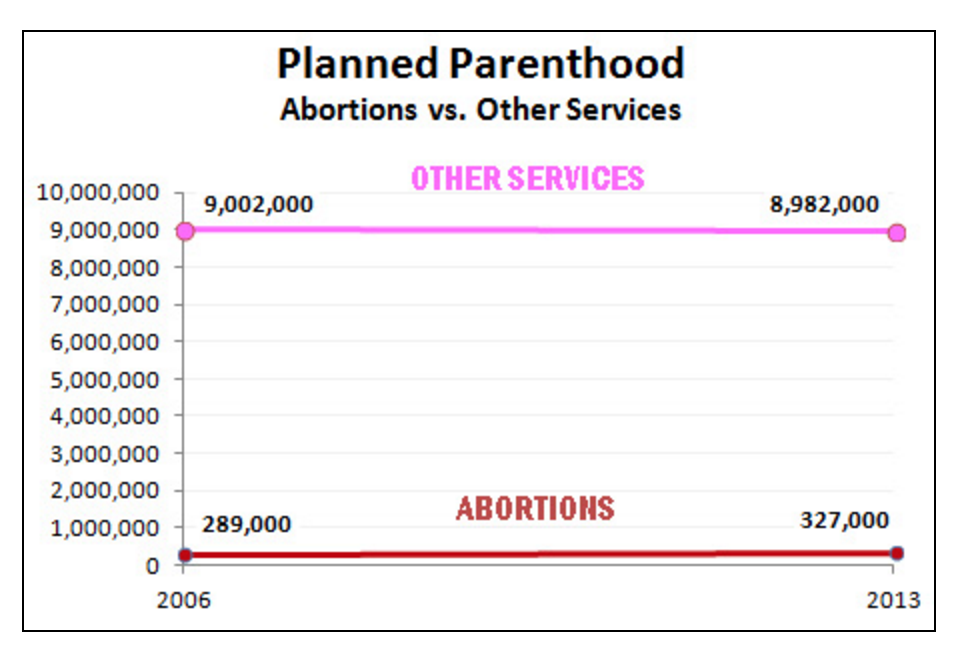 After three congressional investigations into Planned Parenthood turned up no evidence of wrongdoing, then-House Speaker John Boehner announced on October 23 that Rep. Marsha Blackburn (R-Tenn.) would chair a new investigative committee (with $300,000 in funds just to start) to scrutinize the women’s health organization. She was joined by seven anti-abortion Republicans, all of whom co-sponsored a bill in July proposing to defund Planned Parenthood. Democrats charge that this committee is as politically motivated and biased as the one investigating Hillary Clinton and the attacks on the American consulate in Benghazi, Libya.

On December 3, the Senate passed a bill to defund Planned Parenthood and to repeal the Affordable Care Act. Though President Barack Obama planned to veto the legislation, Senate Republicans viewed it as an important symbolic gesture. “The president can’t be shielded by the weighty decision he’ll finally have to make when this measure lands right on his desk,” said Senate Majority Leader Mitch McConnell. Nonetheless, later in December, the final spending bill left the funding for Planned Parenthood intact.

The GOP’s many presidential hopefuls used the Planned Parenthood video controversy to prop up their anti-abortion bona fides as the campaign season ramped up. In February, New Jersey Gov. Chris Christie, just a few months before announcing his presidential bid, told a talk show host at the Conservative Political Action Conference that his decision to veto Planned Parenthood funding for five years in a row in his state was a product of his pro-life beliefs. In August, at a town hall in Colorado, former Florida Gov. Jeb Bush said he believed Planned Parenthood should be defunded because “they’re not actually doing women’s health issues.”

During the second GOP primary debate in September, presidential candidate Carly Fiorina described a grisly scene from the doctored Planned Parenthood videos released by the Center for Medical Progress. “I dare Hillary Clinton, Barack Obama, to watch these tapes. Watch a fully formed fetus on the table, its heart beating, its legs kicking, while someone says we have to keep it alive to harvest its brain.” Fox News went on to call this “the moment of the night,” and Fiorina surged in the polls. The only problem? As noted by many news outlets, the video she described doesn’t exist. Fiorina’s super-PAC then created their own version of the previously nonexistent video.

When anti-abortion rhetoric turned to violence at the clinic in Colorado Springs and gunman Robert Dear opened fire on the facility, leaving three people dead, Democratic candidates responded swiftly to the tragedy with their condolences.

Today and every day, we #StandWithPP. https://t.co/oifqTQLx1X

We proudly #StandWithPP of Colorado Springs and the brave law enforcement personnel who fought to protect it.

The Republican candidates took nearly a full day to weigh in, and even then, only a few offered public statements. Two days after the shooting, Mike Huckabee equated the murders in Colorado Springs with the medical procedures at Planned Parenthood, “where many millions of babies die.”

Attacks on Planned Parenthood in statehouses across the country preceded the videos but gained new intensity after they were released. In 2013, the Texas legislature passed HB2, a controversial law that imposes several onerous restrictions on abortion providers, including the requirement that abortions be performed in facilities known as ambulatory surgical centers. In January 2015, Planned Parenthood completed a new surgical facility in Dallas to comply with the implementation of HB2. The new clinic—a refurbished ambulatory surgical center—cost the organization more than $6 million. Ambulatory surgical centers have strict structural requirements, including wider hallways, sterile ventilation, and larger operating rooms. Planned Parenthood purchased one and then had to spend additional funds readying it for patients. Many medical professionals, including the American College of Obstetricians and Gynecologists, have repeatedly noted that typical doctor’s offices are appropriate settings to perform medically safe abortions.

In February, the Arkansas legislature proposed a bill that would prohibit government funds (other than Medicaid) from going to any group that provides abortions or gives referrals for the procedure. The move cut off funding that the state’s Planned Parenthood chapter had been using to pay for sex ed. The bill was enacted in April and Planned Parenthood’s state-funded sex ed program—focused on teaching public school students about the prevention of HIV and sexually transmitted infections—shut down.

After the videos were released, several states attempted to pull state funding from Planned Parenthood. Louisiana was the first: Gov. Bobby Jindal announced in August that the state would cut off Medicaid funds for Planned Parenthood. In October, a federal judge temporarily blocked this measure from going into effect, but not before the state’s lawyers filed with the court a list of health care providers that could replace Planned Parenthood. The list included dentists, cosmetic surgeons, ophthalmologists, nursing home caregivers, and other doctors outside the field of women’s health. “It strikes me as extremely odd that you have a dermatologist, an audiologist, a dentist who are billing for family planning services,” said the judge.

“It strikes me as extremely odd that you have a dermatologist, an audiologist, a dentist who are billing for family planning services,” said the judge.

In November, the Supreme Court announced it would review its first abortion case in nine years, Whole Woman’s Health v. Cole. The outcome of the case will have major repercussions for all abortion providers in Texas, including Planned Parenthood. At issue in the case is HB2, the omnibus Texas abortion bill that imposes onerous restrictions on abortion providers. As portions of the law have gone into effect, more than half of the abortion clinics in Texas have closed. Before the law there were 41 clinics; now there are 18. If the Supreme Court upholds two of the most burdensome requirements of the law—that abortion clinics be performed in ambulatory surgical centers, and that all abortion clinic doctors have admitting privileges at a nearby hospital—the number of clinics in Texas could fall to 10. More broadly, the high court’s decision will likely clarify its 1992 ruling in another seminal abortion case, Casey v. Planned Parenthood, further defining how far lawmakers nationwide can go when passing abortion restrictions.

Before the law there were 41 clinics; now there are 18.

On August 21, anti-abortion activists protested in front of about 320 clinics around the country, calling on Congress to defund Planned Parenthood. Organizers of the nationwide protests said this was the largest-ever rally against Planned Parenthood. Violence against abortion clinic facilities and staff continued to surge throughout 2015, with an increase in instances of arson and vandalism, culminating in the deadly rampage at a Planned Parenthood clinic in Colorado Springs.

Ever since Colorado Springs, pro-choice advocates have warned that the culture of hate against Planned Parenthood will continue to breed violence against women’s health providers.

“Even when the gunman was still inside of our health center, politicians who have long opposed safe and legal abortion were on television pushing their campaign to defund Planned Parenthood and invoking the discredited video smear campaign that reportedly fed this shooter’s rage,” said Laguens, the executive vice president of Planned Parenthood Federation of America, in the aftermath of the shooting. “Instead of looking for lessons to prevent this from happening in the future, they’re doubling down on their effort to block women from getting preventive health care at Planned Parenthood…It is offensive and outrageous that some politicians are now claiming this tragedy has nothing to do with the toxic environment they helped create.”