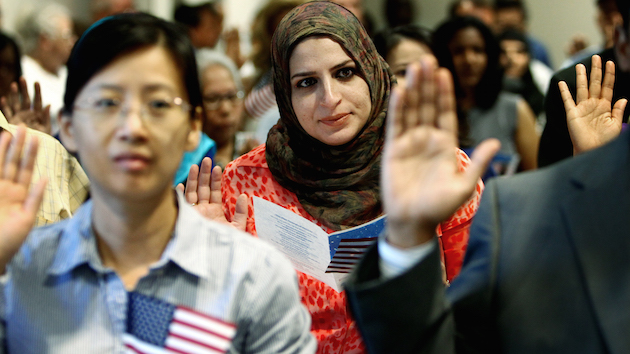 Syrian refugees were already bearing the brunt of American security fears after the Paris attacks. The news that one of the suspected ISIS-linked shooters in Thursday’s mass murder in San Bernardino, California, was an immigrant isn’t likely to help boost support for the process used to resettle those refugees in the United States.

But the screening process for the K-1 visa—the kind that Tashfeen Malik used to enter the United States—is different and less rigorous than the one refugees encounter.

Malik, a 27-year-old immigrant from Pakistan, died in a shootout with police on Thursday along with her husband, 28-year-old Syed Farook. She entered the United States in 2014 on a K-1 “fiancé visa,” which gives the soon-to-be spouses of Americans 90 days to enter the United States and get married.

But the department also acknowledged that the refugee process is more stringent than the K-1 application. “It’s longer in duration. It’s a more thorough vetting,” said State Department spokesman Mark Toner in a press briefing on Thursday.

The vetting process for Syrian refugees takes a minimum of 18 months. Applicants undergo multiple security screenings and in-person interviews conducted by the Department of Homeland Security, and their records are checked throughout the process against databases run by the FBI, the National Counterterrorism Center, and other law enforcement and intelligence agencies. Obama administration officials have called it the most rigorous security screening given to anyone trying to enter the United States.

The K-1 process is much shorter. Once an applicant submits a petition to the State Department, the government collects background information from both that person and his or her fiancé in the United States, including information about their relationship and financial status, and conducts a medical exam of the applicant. When the background file is complete, the applicant is interviewed at the US embassy in his or her country. If all is in order, the visa can arrive within days.

That’s what happened to Khara Persad, a 31-year-old from Trinidad and Tobago who received a K-1 visa last year. She told Mother Jones that the process took her and her now-husband about six months from start to finish. Both had to submit extensive documentation, including Persad’s Trinidadian police records, and Persad felt the process was stringent. “I feel like they did do their due diligence to background check everyone,” she said. US Citizenship and Immigration Services did not immediately respond to a request to detail the security procedures for K-1 applicants.

But unlike the refugee process, the screening also seemed geared toward verifying the couple’s relationship and intent to get married. After submitting the paperwork, she says, she was interviewed at the US embassy in Port-of-Spain, Trinidad, in May 2014. “I did have to put my hand on something, I think, and swear that I had never done anything illegal,” she remembers. Less than a month later, she was in the United States. The couple was married last July.