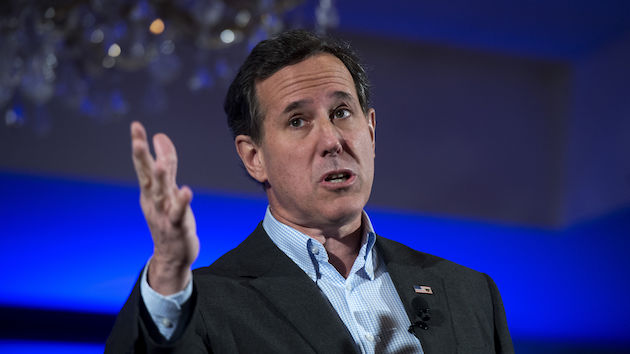 On the edge of Sioux City, Iowa, in the muddy fields off Highway 20, a dirt road leads to large yellow mega-church atop a modest hill. It was there, at the conservative Cornerstone World Outreach, that Rick Santorum finally got his standing ovation.

Four years ago, the former senator from Pennsylvania was poised for a surprise victory in the Iowa caucuses. He topped Mitt Romney with the support of evangelical voters, among them the controversial pastor of Cornerstone, Rev. Cary Gordon, whose influence among evangelicals in the state draws presidential contenders to seek his endorsement.

Gordon endorsed Santorum four years ago. The two have traveled to Israel together, and Santorum’s campaign they are good friends. But in 2016, the pastor has chosen not to back a candidate. In a long and winding article published on TheIowaRepublican blog this week, Gordon, an immigration hard-liner, blasted Marco Rubio, Ted Cruz, and Donald Trump as all being too weak on the issue. (Cruz, who is working hard to woo the types of evangelicals who are influenced by Gordon, might have the most to lose from his decision to stay out of the race.) Although Gordon did not endorse Santorum this time, he did welcome him on Sunday, and allowed Santorum to preach to several hundred listeners in his pews.

Here, on the eve of the Iowa caucuses, the congregation got to its feet and clapped for Santorum. And Santorum, at the podium in what may turn out to be one of the final days of his campaign, chose not to dwell on the present. Instead, he went down memory lane, to four years ago, when his presidential campaign was on the verge of its biggest moment.

“It’s déjà vu for me, because four years ago at this time I was here,” Santorum said. “Pastor Cary gave me an opportunity to come and talk to the church.” Santorum said. At the time, he recalled, Gordon gave him a sack with stones in it, signifying that Santorum was David going up against Goliath.

“While to the world that didn’t happen,” Santorum conceded—the Goliath of this story, Romney, went on to win the Republican presidential nomination—”we were successful in many races going forward in the primary, but ultimately I did not succeed.”

So Santorum recounted some of those victories. He told the story of his youngest child, Bella, who has trisomy 18, falling ill after the South Carolina primary. He left the campaign trail to be with his daughter, who had become “deathly ill.” But after a night in the hospital, her condition improved unexpectedly, and he returned to the campaign trail with a massive rally in Missouri. “Amazingly, we won Missouri that next week, and Colorado and Minnesota and the campaign took off again,” he said. “We called it the Bella surge.”

“Well, things didn’t go out successfully for us, if you will,” he continued, “and here I am back in Iowa. We’re out again fighting the same fight.”

As Santorum braces for what’s almost certain to be a poor showing in the caucuses Monday, his sermon offered a glimpse into what it might feel like to be on the verge of defeat. “What you and the world may see as success,” he said, “isn’t necessary how God sees success.”