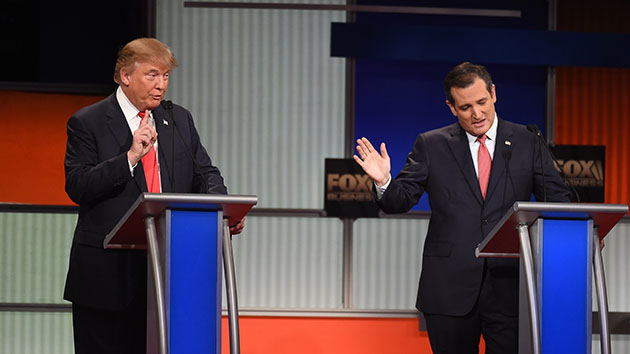 The first Republican presidential debate of 2016 was one of realignment. The candidates themselves had a bit more space on stage, after Carly Fiorina and Sen. Rand Paul were kicked out of the prime-time debate thanks to their dwindling poll numbers. Ted Cruz and Donald Trump broke their tentative alliance as Trump pondered whether Cruz could legally serve as president. Marco Rubio and Trump got wonky on tax policy and immigration as they sought to tear each other down.

With just over two weeks left before the Iowa caucuses, here are a few of the highlights from Thursday’s debate.

Cruz would have retaliated for captured sailors. Even though the 10 sailors captured by Iran were released on Wednesday, Cruz opened the debate by promising that “any nation that captures our fighting men will feel the full force and fury of the United States of America.”

Cruz also railed against President Barack Obama for failing to mention the sailors in his State of the Union address Tuesday night, which occurred before the sailors were released. The White House has already explained the decision not to discuss the situation in that speech as a foreign policy decision:

“Donald, I’m not going to use your mother’s birth against you,” Cruz promised to Trump, of the revelation about his mother. “Good,” Trump responded. “Because it wouldn’t work.”

“I already know the Democrats are going to be bringing a suit. You have a big lawsuit over your head while you’re running. And if you become the nominee, who the hell knows if you can even serve in office?” Trump warned. “So you should go out, get a declaratory judgment, let the courts decide.”

“Why are you saying this now right now?” moderator Neil Cavuto asked Trump.

Trump gladly accepts the “mantle of anger.” During her response to Obama’s State of the Union this week, South Carolina Gov. Nikki Haley called out the “angriest voices” in the party. Moderator Maria Bartiromo wondered if Trump thought she’d gone too far. Trump said no.

“I’m very angry because our country is being run horribly and I will gladly accept the mantle of anger,” Trump responded, saying he had no beef with Haley. He proudly touted how angry he was, and said he’d stay that way until he’s elected president and fixes things up. “I’m very, very angry,” Trump said. “So when Nikki said that, I wasn’t offended. She said the truth.”

Rubio versus Christie: The battle for third. Rubio was probably hoping he would not be bickering with Chris Christie two weeks before voting starts while Trump and Cruz repeatedly engage each other as the two front-runners. And yet, that’s what happened Thursday night. Christie has been gaining support in New Hampshire, threatening to overtake Rubio in the polls. So the super-PAC supporting Rubio has launched negative attacks ads on Christie. Rubio doubled down on those attacks when asked if he stood by those attack ads. But Christie, prepared for the attack, returned fire.

Asked about Bill Clinton, Ben Carson bemoans…internet commenters? Oh, Ben. The Fox moderators asked Carson whether it was fair to hold Hillary Clinton responsible for her husband’s “sexual misconduct.” Carson didn’t have much of a response for that, but he wanted to discuss “values and principles.” What, in Carson’s mind, was an indication that the nation’s morals had fallen?

“You know, you go to the internet, you start reading an article, and you go to the comments section—you cannot go five comments down before people are calling each all manner of names,” Carson said. “Where did that spirit come from in America? It did not come from our Judeo-Christian roots, I can tell you that. And wherever it came from we need to start once again recognizing that there is such a thing as right and wrong. And let’s not let the secular progressives drive that out of us.”

Rubio wants a gun in case ISIS attacks. None of the Republicans on stage were fans of Obama’s calls for further gun control. But Rubio took his defense of Second Amendment rights a step further, saying that bearing arms is not just a constitutional right, but a necessity for keeping the country safe from ISIS.

“And let me tell you, ISIS and terrorists do not get their guns from a gun show,” Rubio said. “Here’s a fact. We are in a war against ISIS. They are trying to attack us here in America. They attacked us in Philadelphia last week. They attacked us in San Bernardino two weeks ago. And the last line standing between them and our families might be us and a gun.”

Trump plays the 9/11 card. Cruz walked right into this one. The senator from Texas, who has been attacking Trump as a New York liberal, made the accusation to his face Thursday night. And just like that, Cruz handed Trump the opportunity to defend New York with the mother of all trump cards.

“When the World Trade Center came down, I saw something that no place on Earth could have handled more beautifully, more humanely than New York,” he said. “And the people in New York fought and fought and fought, and we saw more death, and even the smell of death—nobody understood it. And it was with us for months, the smell, the air. And we rebuilt downtown Manhattan, and everybody in the world watched and everybody in the world loved New York and loved New Yorkers.”

“And I have to tell you,” he concluded, “that was a very insulting statement that Ted made.”

All Cruz could do was smile, nod, and clap for Trump.

Rubio takes on Cruz as a flip-flopping politician. Near the end of the evening, Rubio finally got a chance to go after Cruz—and he went all out. Rubio accused Cruz of changing his positions on issues like the Trans-Pacific Partnership trade deal and ethanol subsidies to win voters.

When Rubio had finished, Cruz responded that his opponent had dumped his entire opposition research file on him.