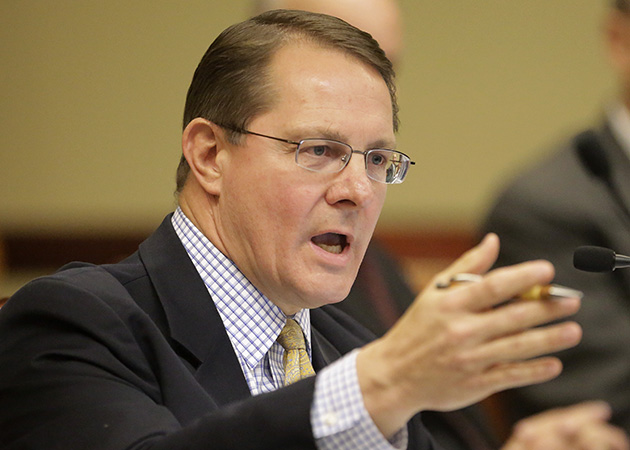 As a young man, Ken Ivory served as a Mormon missionary in Guatemala. These days, he’s still looking for converts. Ivory, a Republican state representative from a Salt Lake City suburb, has spent the past three years traveling the American West to convince state and local officials that they can claim millions of acres of federal land to use as they wish.

The federal government owns 47 percent of the 11 Western states. Much of this land is controlled by the Bureau of Land Management and is open for hunting, ranching, logging, mining, and drilling. Usually, these public lands can only change hands with approval from Congress—something that isn’t going to happen anytime soon.

Nevertheless, Ivory’s concept has caught on beyond the militia types who are demanding that the feds give up control of their holdings such as the eastern Oregon wildlife refuge currently held by armed occupiers. The Republican National Committee has endorsed the idea of turning over federal land to the states, and in March, the Senate passed a budget amendment sponsored by Sen. Lisa Murkowski (R-Alaska) that would create a fund for selling or transferring the land. Sen. Ted Cruz (R-Texas) has set forth a proposal that the federal government cannot own more than half the land in any state.

Sen. Rand Paul (R-Ky.) has also endorsed state or private control of federal land. “You run into problems now with the federal government being, you know, this bully,” Paul told a crowd in June before meeting with Cliven Bundy, the Nevada rancher who refused to pay more than $1 million in fees for grazing his cattle on federal land. The meeting, Bundy said, helped show Paul “the difference between Cliven Bundy’s stand and Ken Ivory’s stand.” Bundy’s son Ammon is currently leading the armed occupation in Oregon. 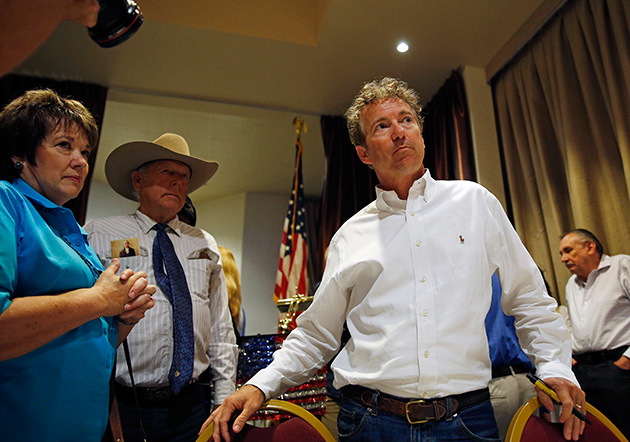 The idea of taking over federal property makes for an easy sound bite, says David Garbett, staff counsel for the Southern Utah Wilderness Alliance, a preservation group. But, he explains, “Every time people look at the arguments, and they have time to think and to evaluate what this is all about, it fails.” Ronald Reagan campaigned as “one who cheers and supports” the late ’70s Sagebrush Rebellion, but once he was in the White House, the push to sell off federal land stalled.

No Western state has been as enthusiastic about a landgrab as Utah. In 2012, it passed the Transfer of Public Lands Act, which demanded the feds hand over some 31 million acres, potentially opening them up to even more coal mining and oil and gas extraction. An analysis commissioned by the Legislature found that the state would incur huge expenses if it suddenly gained all that land. (Its costs for firefighting on public land would increase sixfold; Ivory has suggested reducing fire risks with more logging.) That fat price tag is one reason former Arizona Gov. Jan Brewer, a Republican, vetoed a land transfer bill similar to Utah’s. Nonetheless, the Utah state Legislature has approved spending up to $2 million to prepare to sue the federal government.

Ivory’s nonprofit has received money from Americans for Prosperity, the dark-money group founded by the Koch brothers.

The usual suspects are backing Ivory. He sits on the federalism committee of the American Legislative Exchange Council. His nonprofit, the American Lands Council (ALC), is largely funded by local and county governments eager to gain control of land in their communities. It has also taken funding from utility companies and Americans for Prosperity, the dark-money group founded by the Koch brothers.

In 2013, more than 50 percent of the funds the ALC raised went to Ivory and his wife, who together were paid more than $100,000. The Campaign for Account­ability, a Washington, DC-based watchdog group, has asked attorneys general in Utah, Arizona, and Montana to investigate Ivory for allegedly peddling “demonstrably untrue statements” about constitutional law while soliciting checks from government officials. Anne Weismann, the group’s executive director, says the ALC “just reeks of the classic snake oil salesman.” (Montana’s AG has declined to investigate.)

Ivory dismisses the accusation as “an absolutely ridiculous political stunt. That’s how DC does things. That’s not how Utah does things.”