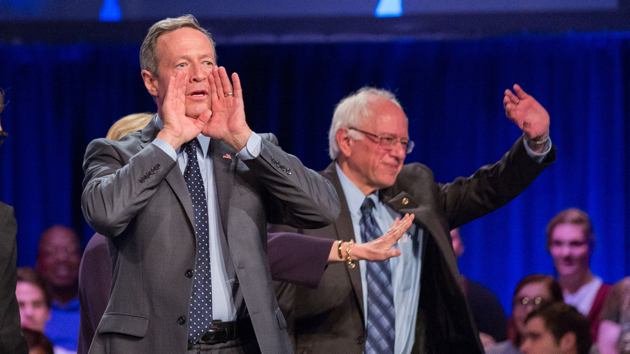 Martin O’Malley is pissed at Bernie Sanders. With the Democrats on track to add a new debate for their presidential candidates between Iowa and New Hampshire, the long-shot candidate ripped into Sanders (who has yet to agree to this debate, while Hillary Clinton has) with an odd charge. He claimed that Sanders’ public calls over the summer for additional debates had been “totally disingenuous” and that Sanders had privately worked against more face-offs being added to the lineup. “Bernie Sanders didn’t want any more debates, from the beginning,” O’Malley said following an event in Grinnell, Iowa, on Wednesday night.

Speaking with reporters from Mother Jones and MSNBC, O’Malley seemed to fault Sanders more than Clinton for the limited number of debates on the Democratic side. The number of debates was set by the Democratic Party, and the rules it established prohibited candidates from participating in debates that were not sanctioned by the Democratic National Committee. O’Malley claims that, once these rules were announced, his campaign reached out to the Sanders camp seeking their support in pushing for more debates. But, O’Malley says, Sanders declined. “We knew as soon as those rigged rules came down, we knew that if [Sanders] would agree to do more debates, we would have more debates, but he would never agree,” O’Malley said. “He didn’t want more debates.” O’Malley’s charge, however, is a bit hard to square with Sanders’ actions at the time. The Vermont senator was in fact sending letters to the DNC and posting petitions to his website rallying supporters behind more debates.

Asked to respond to O’Malley’s statements, the Sanders campaign sent along a press release it had released Wednesday evening saying it would agree to the New Hampshire debate, but only on the condition that Clinton agreed to further debates in March, April, and May. “From the beginning of this campaign Sen. Sanders has called for more debates. Secretary Clinton has not,” the release said, with no mention of O’Malley by name, perhaps because it’s a given that he would happily appear at any future debate if he’s still in the race.

O’Malley has languished at the bottom of the polls, averaging 4 percent in Iowa, a state where he has devoted the majority of his campaign’s activity. He attributed his poor standing to an unfair process created by the Democratic Party. “Look, when you put your boat into the river, that doesn’t mean you control the river, there’s a lot about this process I couldn’t control,” he said. “Where I saw injustices, where I saw us making a mistake as a party like undemocratically limiting the number of debates to the fewest ever, hiding them on Saturdays and Sunday nights, I pointed that out, I kicked over the soup.”

The DNC limited the number of debates for the entire nomination cycle to just six, with several falling on weekends near holidays—a move that presumably was designed to benefit Clinton, the front-runner who stood the greatest risk from more time spent on a debate stage. But now that Clinton is running even with Sanders in Iowa and trailing him in New Hampshire, her campaign has supported the New Hampshire Union Leader‘s efforts to schedule a new debate next week. Sanders looks to be the lone holdout if Clinton doesn’t agree to his request for spring debates. As for O’Malley, he would probably be delighted with a debate each day.