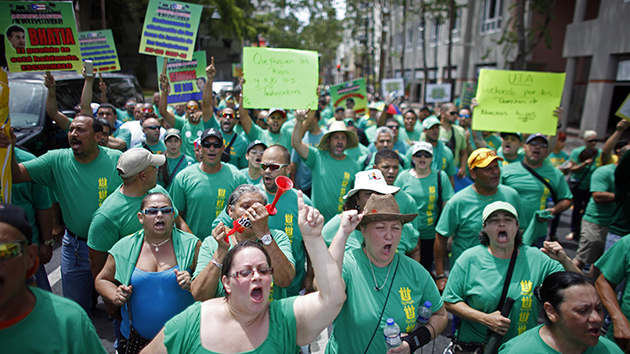 In early September, Hillary Clinton and Marco Rubio campaigned in San Juan, the Puerto Rican capital, on the same day—a nod to the island’s importance in the November presidential election, thanks to a surging population of Puerto Ricans in Florida, the mother of all swing states. But the two candidates came bearing very different visions for how the island territory should cope with its severe debt crisis. At a roundtable event, Clinton backed bankruptcy reforms that would spare the island from the worst ravages of austerity at the cost of profits for its Wall Street creditors. “You can’t fix your economy through austerity,” she said. At his own rally across the city, Rubio took Wall Street’s side. The Associated Press reported that Rubio, speaking in Spanish, “railed against giving Puerto Rico bankruptcy protection.”

Rubio wasn’t always a vocal opponent of bankruptcy protections for Puerto Rico. And his current stance is one that, should he become the Republican nominee, would be hard to explain to the hundreds of thousands of Puerto Rican voters in Florida.

Puerto Rico is currently embroiled in dire financial troubles. The island is $72 billion in debt. In August, Puerto Rico began missing payments to its lenders. Last week, it defaulted on $174 million in payments to creditors. Meanwhile, the island’s economy is floundering, with unemployment at 12 percent. The governor, Democrat Alejandro García Padilla, has repeatedly requested that Congress grant cities and public utilities in Puerto Rico access to Chapter 9 bankruptcy, which would give them the same tools to restructure debt that are available in the 50 states.

“We will not forget, especially in November.”

Like residents of the District of Columbia, Puerto Ricans lack full congressional representation. The island’s lone representative in Congress is Pedro Pierluisi, who is not allowed a vote on the final passage of legislation even though, as he likes to point out, he represents more people than any other member of the House of Representatives. Since the island doesn’t send anyone to the Senate, Pierluisi has to court friends on the other side of the Capitol to push for Puerto Rico’s interests. “My natural allies in the Senate are the senators who have a significant Puerto Rican presence in their states,” Pierluisi says, ticking off New York’s Chuck Schumer and Kirsten Gillibrand and Florida’s Bill Nelson and Rubio as his usual Senate partners.

Typically, Rubio has backed Pierluisi’s proposals, he says. In 2013, for example, Rubio introduced in the Senate Pierluisi’s bill to allow Puerto Rico to receive funds to implement electronic medical records.

But that alliance crumbled when Pierluisi asked for help with the island’s debt crisis. “He has supported us on other areas,” Pierluisi says of Rubio. “But not on Chapter 9.”

Democrats approached Rubio’s office earlier this year about co-sponsoring a Chapter 9 bill in the Senate, and they were initially hopeful that he’d sign on when his office didn’t offer any policy objections, according to a Democratic aide in the Senate. But as the process dragged on, Rubio backed away without offering any alternatives or trying to find a compromise. “They ultimately didn’t have substantive issues with what we were talking about but couldn’t commit,” the aide said.

Last month, the New York Times detailed how Sen. Richard Blumenthal of Connecticut had initially tried to woo Rubio to join the Democrats’ bill, only for Rubio to back away just three weeks after a fundraiser with a hedge fund founder who had a stake in Puerto Rico’s debt. In November, Fusion reported that six hedge fund executives who hold Puerto Rican debt have donated to Rubio’s presidential campaign.

While perhaps good for his presidential fundraising, Rubio’s decision to back away from bankruptcy protections for the island could haunt him. The same economic turmoil that created the conflict between the island’s government and Wall Street has also spurred the biggest migration of Puerto Ricans to the US mainland since the 1950s and 1960s. Back then, Puerto Ricans headed mainly for New York and New Jersey. This time, about a third of Puerto Ricans coming to the mainland are landing in Florida, an important swing state in this year’s presidential race.

Today, there are more Puerto Ricans living on the US mainland (5.1 million) than in Puerto Rico (3.5 million). As the US economy rebounded from the Great Recession but the island’s economy remained stagnant, migration to the mainland accelerated. Today, there are about 1 million Puerto Ricans in Florida—likely at least 100,000 more than in 2012, although exact figures are hard to come by. That increase is greater than President Barack Obama’s 73,000-vote margin of victory in Florida in 2012.

The Puerto Rican vote in Florida is mostly Democratic, although there are opportunities for Republicans to make inroads into the community. Obama won 77 percent of the Puerto Rican vote in Florida in 2008 and 84 percent in 2012. But it wasn’t too long ago that Jeb Bush won the backing of a majority of Puerto Ricans in his 2002 gubernatorial race, by diligently courting their votes. (Bush, incidentally, supports both Puerto Rican statehood and bankruptcy protections.) In 2010, Rubio significantly outperformed both John McCain’s 2008 campaign and Mitt Romney’s 2012 campaign among Puerto Rican voters. If he is the nominee in November, Rubio will have a built-in advantage with Puerto Ricans due to “the Hispanic heritage he brings, the ability to speak the language, and the fact that he’s from Florida,” says Fernand Amandi, a Democratic pollster in Florida.

The newest arrivals from Puerto Rico represent an even bigger opportunity for Republicans. Unlike those who have lived in Florida for years and have forged a connection with the Democratic Party, newcomers don’t strongly identify with either party. (On the island, political divisions are centered on disagreements over Puerto Rico’s status as a territory rather than the left-right breakdown that defines the parties on the mainland.) What they do feel is a connection to the island, its economic distress, and the livelihoods of their family members who remain there.

“In Puerto Rico they can’t vote, but we can here,” says Betsy Franceschini, a Hispanic outreach director in Florida for the Puerto Rico Federal Affairs Administration, an arm of the island government that works as a liaison to the federal and state governments. “We want to make sure that whatever candidate we support will stand by our community and stand by during this crisis.”

“We will not forget,” Franceschini adds, “especially in November.”

Maurice Ferré, a former Democratic mayor of Miami who was born in Puerto Rico, believes that US policy toward the island will be more important in the 2016 elections than ever before. “Everyone has family in Puerto Rico, and they’re all being affected by this,” he says. “Pensions are now in doubt, health services are now in question…They’re cutting the police, they’re cutting education.”

Thanks to Florida’s presence among the handful of key swing states that candidates will have to jockey over this fall, small issues like this can take on an outsize importance—even deciding the outcome of the election.

“The Republicans cannot afford to ignore the Puerto Rican electorate because if they do, they will lose Florida.”

“When you have a state as close as Florida potentially could be, and a lot of people anticipate to be, every segment of the electorate has an overmagnified sense of importance,” says Amandi, the pollster. “If anything, the newer arrivals [from Puerto Rico] that don’t have as much of a cultural history with either of the two parties here, you might say, are more important because they are potentially up for grabs. And some of these single issues, especially as it relates to the island, could very well be a litmus test issue.” Amandi estimates these recent arrivals in Florida, from the latest migration wave over the past decade, could number around 200,000.

So do the math: In Florida, that means potentially as many as 200,000 up-for-grab voters in a state that could, in a close election, be decided by a few thousand votes.

“The Republicans cannot afford to ignore the Puerto Rican electorate because if they do, they will lose Florida,” says Amandi, noting that the GOP nominee doesn’t need to win a majority of Puerto Ricans, but rather needs to surpass McCain and Romney’s poor showings—as Rubio did in 2010. This time around, Amandi says, Rubio is “going to have to explain to Puerto Rican voters why he is against bankruptcy protections.”

Puerto Rican leaders are already showing their anger at Rubio’s decision to back away from bankruptcy. During a December trip to Washington to lobby for bankruptcy protection, the island’s governor warned that Puerto Ricans in Florida would remember Rubio’s decision not to support bankruptcy come November. “They will be [here] on Election Day,” he said.