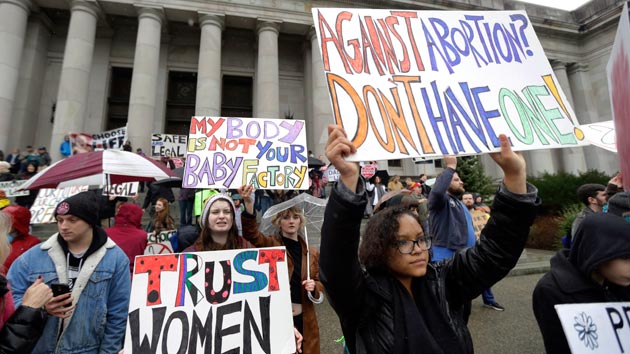 Forty-three years ago today, the Supreme Court decided Roe v. Wade. The landmark case established a woman’s constitutional right to an abortion. Ever since then, anti-abortion politicians and activists have tried to chip away at Roe. States have passed more than 1,000 restrictions on the procedure and the Supreme Court has ruled on several other abortion cases, each time further limiting abortion access.

What is clear, however, is that after Roe v. Wade, the availability of safe and legal abortions radically changed health outcomes for women. In a book that collected stories from the illegal abortion era, a man who assisted with autopsies at a hospital described seeing many women die from botched abortions. “The deaths stopped overnight in 1973,” he said. “That ought to tell people something about keeping abortion legal.”

Today, discussions of women’s safety are more often heard in statehouses enacting further restrictions on abortion. The medical safety of women framed many of the arguments cited at the Texas Capitol in 2013, when the state Legislature debated, and ultimately passed, HB 2. This omnibus abortion bill imposed costly requirements on clinics—such as hospital-admitting privileges and stringent construction rules—which the medical community overwhelmingly deems to be unnecessary. Since its passage, 23 of the state’s 41 abortion providers have closed, and others are likely to follow if the measure is upheld after the Supreme Court reviews HB 2 this year. The high court’s ruling could deal a serious blow to the guarantee of the right to a legal abortion enshrined 43 years ago. Either way, many players will be affected—patients, providers, lawyers on both sides of the debate, legislators, the courts, and even lobbyists.

Over the years, Mother Jones has covered the abortion wars from many of their perspectives. Here’s a look back at some of those stories:

In 2004, Eleanor Cooney wrote an essay entitled “The Way It Was” about the illegal abortion she had as a 17-year-old in 1959, 14 years before Roe. The year before her story appeared, President George W. Bush, flanked by smiling Republican senators and congressmen, had signed the Partial Birth Abortion Ban into law, banning the dilation and extraction abortion method usually used in the second trimester. The measure heralded a new era of legislative efforts aimed at stifling abortion access. “Like some ugly old wall-to-wall carpeting they’ve been yearning to get rid of,” wrote Cooney, “they finally, finally loosened a little corner of Roe. Now they can start to rip the whole thing up, roll it back completely, and toss it in the Dumpster.”

In 1981, 14 clinics in Mississippi provided abortions. In 2013, only one remained, thanks to legislation that chipped away at the providers’ ability to keep their doors open. In “Inside Mississippi’s Last Abortion Clinic,” former Mother Jones reporter Kate Sheppard profiled the providers fighting to keep the clinic open, the doctors who flew in from out of state to perform the procedures, a woman who made the decision to terminate her pregnancy, and one of the protesters, who stood outside the clinic every day, tossing miniature plastic babies at car windows.

In 2003, 76-year-old gynecologist Dr. William Rashbaum was still working, and his practice included providing late-term abortions, something he’d been doing for the 30 years since Roe. He was one of the oldest living providers of second-trimester abortions in the United States before his death in 2005. In “End of the Road,” Rebecca Paley profiled the doctor in the final years of his career, visiting his practice and chronicling his fierce commitment to helping women.

In 1992, the Supreme Court ruled on a pivotal abortion case, Planned Parenthood v. Casey. Robert Casey was the governor of Pennsylvania at the time, and Planned Parenthood sued the state over five provisions in a recently passed abortion law. The high court ruled that states could pass abortion regulations, provided these did not place an “undue burden” on women’s access to the procedure. The ruling opened the door for a wave of abortion restrictions across the country. Right around this time, attorney Harold Cassidy was going through a drastic evolution: A former pro-choice liberal, he had started going to court to defend mothers, including surrogates and birth mothers of adopted kids. He then became one of the anti-abortion movement’s most prominent and successful lawyers. In “The Man Who Loved Women Too Much,” Sarah Blustain profiles Cassidy and his decades-long legal push to restrict abortion access by turning the pro-choice argument on its head: arguing that abortion violates women’s rights.

Earlier this month, a Guttmacher Institute report pointed out that since 2010, more anti-abortion laws have been passed than in any other five-year period since the Roe decision. These restrictions have created a new landscape of severely restricted abortion access in a number of states. Last fall, former Mother Jones reporter Molly Redden traveled to report on what life is like for women facing unplanned or unwanted pregnancies in these states. She spoke to women who went thousands of miles or crossed state lines to get abortions, going from Texas to Washington, DC, from Indiana to Ohio, and more. “Most abortions today involve some combination of endless wait, interminable journey, military-level coordination, and lots of money,” wrote Redden. “Four years of unrelenting assaults on reproductive rights have transformed all facets of giving an abortion or getting one—possibly for good.”

At one point, the most visible members of the anti-abortion movement belonged to Operation Rescue, an extreme activist group that would protest in front of clinics. Increasingly, it became clear that the harassment of women and doctors at clinics distracted from the anti-abortion mission. But other organizations that focused on attacking abortion legislatively, rather than physically, gained prominence. One of them is Americans United for Life. Founded in 1971 and run mostly by women, AUL is “one of the most effective anti-abortion organizations in the country,” writes Kate Sheppard, even though its budget of about $4 million pales in comparison to many other anti-abortion groups. AUL’s mission is to end abortion in the United States, and its main strategy for doing so is helping states chip away at Roe by passing various abortion restrictions. Sheppard profiled AUL in 2012, right after it had one of its most successful years on record: In 2011, 92 restrictions on abortion were passed in states nationwide, 24 of which were either written or promoted by AUL.

In the summer of 2015, the anti-abortion Center for Medical Progress released a series of secretly recorded and deceptively edited videos purporting to show Planned Parenthood officials discussing the sale of fetal tissue—a practice that would be illegal. The videos inflamed the abortion debate and resulted in numerous state and congressional investigations and efforts to defund the largest women’s health care organization in the country. Six states tried to defund Planned Parenthood, seven states investigated the women’s health provider (none found evidence of fetal tissue sales), and three congressional committees launched their own inquiries.

One of these committees summoned Planned Parenthood president Cecile Richards to testify in September 2015. House Republicans grilled Richards for more than four hours about how Planned Parenthood spends its federal funding. The most aggressive interlocutor was Rep. Jason Chaffetz of Utah, who—as Kevin Drum explained—also used a series of completely incorrect charts to make the erroneous point that Planned Parenthood’s primary business is abortion.

Florida marriage therapist Vincent Rue has appeared in a number of states in the past few years assisting them in defending anti-abortion laws. In a 2014 article, Molly Redden explains how his research—which claims to show that women who go through the procedure eventually suffer from mental illness—has been thoroughly discredited by several courts and health organizations. Still, states continue to pay for his expertise: “Republican administrations in four states—Alabama, North Dakota, Texas, and Wisconsin—have paid or promised to pay Rue $192,205.50 in exchange for help defending anti-abortion laws,” Redden wrote.

In March, the high court is set to hear arguments in Whole Woman’s Health v. Cole. The case, brought by Texas abortion provider Whole Woman’s Health and the Center for Reproductive Rights, challenges HB 2, the Texas abortion bill whose onerous restrictions could shut down all but 10 of Texas’ abortion clinics, leaving women in large swathes of the state without an abortion provider. Many advocates are calling this the most important abortion case in nearly 25 years. The plaintiffs are challenging HB 2 as a violation of the Supreme Court’s ruling that abortion restrictions can’t place an “undue burden” on abortion access. If the Supreme Court upholds the Texas law, it could widen the already murky “undue burden” standard, opening the door for similar regulations in other states. “This case represents the greatest threat to women’s reproductive freedom since the Supreme Court decided Roe vs. Wade over 40 years ago,” wrote Ilyse Hogue, the president of NARAL Pro-Choice America, in a November statement. “Laws like the ones being challenged in Texas are designed to subvert the Constitution and end the right to a safe and legal abortion.”