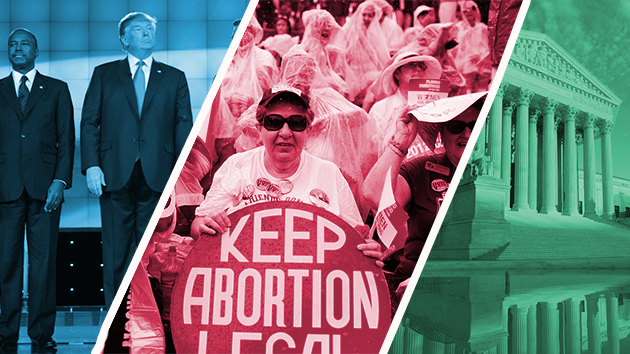 Between the shooting deaths of three people at a Colorado Planned Parenthood, the Supreme Court’s decision to hear its first abortion-related case in nine years, and the more than 50 new abortion restriction laws enacted by state governments, abortion access was one of the most important issues of 2015. With presidential politics and ongoing legal challenges in the states, abortion rights will continue to be under fire in 2016.

And that is despite the fact that even-numbered years are generally slow when it comes to legislative pushes—elections cut off the legislature calendars, and general assemblies in many states don’t even meet. But Nash says next year will be different.

Here are some of the abortion-related activities to watch for in 2016:

For the first time in nine years, the US Supreme Court will hear a case on abortion as the justices review a 2013 Texas law. They must decide if HB 2 unconstitutionally restricts access to abortion by subjecting outpatient abortion clinics to some of the same standards as hospitals. The law also requires providers to obtain admitting privileges at nearby hospitals. Pro- and anti-choice activists alike have said the case has the potential to end the right to safe and legal abortion in the United States. The law has already lead to the closure of more than half the abortion clinics in Texas, leaving huge swathes of the state without a provider and forcing women to travel hundreds of miles to get care.

The Supreme Court will also rule next year on whether the Affordable Care Act’s contraception coverage requirements infringe on nonprofit religious groups’ freedom of conscience. The Court decided to consolidate seven appeals from religious nonprofits, ranging from nursing homes run by the Little Sisters of the Poor, a Roman Catholic religious order, to religiously affiliated schools such as Southern Nazarene University and Geneva College.

Planned Parenthood and the Supreme Court cases are sure to come up during next year’s presidential campaign. Republican presidential hopefuls have competed to claim the most extreme anti-abortion position by defending their anti-abortion legacies and attacking Planned Parenthood and other women’s health care organizations. All the GOP candidates have said they oppose abortion in most cases, the vast majority of them say they want to overturn Roe v. Wade, and about half of them think abortion should be outlawed, even in cases of rape or incest.

Republicans have doubled-down on that issue during debates. During the second GOP debate, Ted Cruz called Planned Parenthood a “criminal enterprise” guilty of “multiple felonies,” and in October he called himself a leader in the fight against the women’s health care organization. Sen. Marco Rubio told Fox News host Megyn Kelly that he believes “every single human being is entitled to the protection of our laws, whether they…have their birth certificate or not.” And following her now-debunked claims during the first debate that babies are born alive during abortions so their organs can be harvested, Carly Fiorina told Fox News that she believes most Americans agree with her that abortion should be banned “for any reason at all after five months.”

Democratic candidates all say they’re pro-choice, but they differ on the specifics. Hillary Clinton, who in 1995 said “women’s rights are human rights,” recently compared anti-abortion Republicans to terrorist groups. She has been outspoken in her support of Planned Parenthood during debates. But she has also come under fire in the past for saying abortion should be “safe, legal, and rare,” a sentiment some advocates say stigmatizes abortion.

In comparison, Bernie Sanders, Clinton’s main rival, has offered no qualifications to his support for abortion, saying he wants to increase funding for Planned Parenthood and believes “the decision about abortion must remain a decision for the woman and her doctor to make, not the government.”

Americans United for Life, an anti-abortion advocacy group that has been a powerful force in shaping abortion legislation by writing model legislation for state and local governments, helped push through at least 38 pro-life laws at the state level in 2015. Its legislative priorities for 2016 include restrictions on late-term abortions and those based on the sex of the fetus, a ban on the sale of aborted fetal tissue, and an “Unborn Wrongful Death Act,” which would allow civil charges to be brought against anyone responsible for the death of an “unborn child at any stage of development.”

“Already, AUL is receiving requests for a legislative package to address not only the barbaric trafficking in infant body parts, revealed by the Center for Medical Progress videos, but also the inhumanity of late-term abortion procedures which cause excruciating deaths for infants and carry substantial health risks for women,” said Charmaine Yoest, president of Americans United for Life, in a statement.

In addition to new legislative pushes, ongoing legal battles in a handful of states may be resolved in 2016 and have the potential to affect abortion restrictions across the country. More are sure to crop up, but here are some of the most significant women’s health issues that courts will be asked to resolve in the states:

State attacks: Planned Parenthood faced an onslaught of congressional, legislative, and physical attacks following a widely debunked video campaign accusing the nation’s largest health care provider of selling aborted fetal tissue. Even though investigations have found no wrongdoing, the organization will continue to be under fire in 2016. Planned Parenthood will battle to keep its funding after governors in at least five states—Alabama, Utah, Arkansas, Louisiana, and Texas—cut it off. This fall, Planned Parenthood sued the states, arguing that the blocking of its funding was preventing women from accessing their chosen health care providers, in violation of federal law. In December, Alabama settled its suit with Planned Parenthood, and a federal judge in Utah reversed the lower court’s ruling, saying the state could defund Planned Parenthood. But the legal battles in other states will continue into the new year.

Aside from the issue of funding, state legislatures will continue to push bills restricting fetal tissue donation and disposal. These bills, which prohibit the donation of aborted fetal tissue and require clinics to offer burial and cremation to women as options along with incineration (the standard medical practice for a lot of biohazardous waste), have started appearing already but will gain even more traction in 2016, according to Nash.

Congressional battles:  In October, then-House Speaker John Boehner announced the creation of a 13-member subcommittee, which reports to the House Energy and Commerce Committee, to investigate Planned Parenthood. Though three other Congressional investigations into the health care organization found no evidence of wrongdoing, the House panel, made up of seven Republicans and six Democrats, received $300,000 to fund their investigation, which will begin in 2016.

“There are still many questions yet to be answered surrounding Planned Parenthood’s business practices and relationships with the procurement organizations,” said Tennessee Rep. Marsha Blackburn, who’s chairing the subcommittee. “This is exactly why the House is investigating abortion practices and how we can better protect life.”