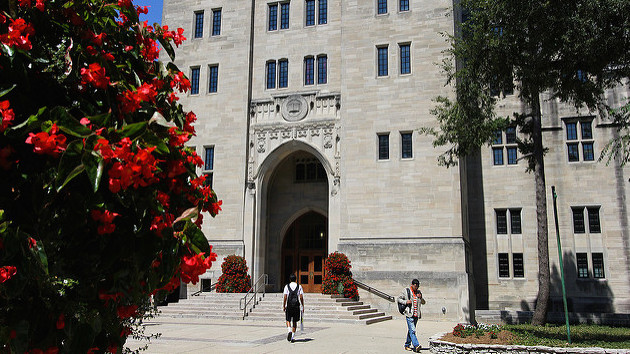 Update, 2/29/2015: Jason Casares resigned from his position as Indiana University’s director of student ethics and deputy Title IX coordinator on February 26. Emerita professor Julia Lamber is reexamining the 18 sexual-assault hearings he presided over “to ensure that all parties involved received equitable treatment,” according to an IU press release.

Jason Casares, the associate dean of students and deputy Title IX coordinator at Indiana University’s flagship campus in Bloomington, has built a reputation as an expert on college sexual assault. He’s well known enough among his peers to have been voted president, in November 2014, of the Association for Student Conduct Administration, a professional group of around 2,700 college officials. Last year, he helped write the curriculum for the group’s training program for campus rape investigators.

For the ASCA’s annual conference this month, Casares had planned to teach seminars on Title IX and on using a “trauma-informed approach” in sexual misconduct investigations. Then, during the conference keynote on February 3, ASCA board member Jill Creighton circulated a letter accusing him of sexual assault.

Creighton’s letter described an evening last December when the two had drinks at a convention for fraternity and sorority advisers in Fort Worth, Texas. “I made the mistake of letting my guard down while socializing with Jason about Association business,” Creighton wrote. “Jason took advantage of me after I had had too much to drink…I did not consent to sexual contact.”

Casares declined to be interviewed, but a statement released by his lawyer says that he “categorically denies the false accusations of sexual misconduct leveled against him by a colleague.”

Creighton, an administrator at New York University who had recently been voted the ASCA’s next president, provided Mother Jones a statement detailing her experience in the days after the alleged assault. According to the statement, she confronted Casares in a text message, requesting that he resign from the ASCA—they were slated to work together on the board for at least two more years—and step back from his position as a public leader on the issue of sexual assault. When Casares refused, Creighton filed an incident report with law enforcement in Fort Worth on December 9.

“The processes that we run on our campuses are designed to be fundamentally fair to everyone involved. At no moment was I provided with fairness.”

Detectives are still reviewing the report, officer Tamara Pena confirmed. Meanwhile, IU has placed Casares on paid administrative leave. A school spokesman said that IU also is conducting its own investigation and will review all student sexual-misconduct hearings in which Casares participated this academic year.

Perhaps the most troubling development, though, came when Creighton asked the ASCA board to impeach Casares after she filed her police complaint. The organization—which is made up of people trained in investigating campus sexual assault—mounted an investigation resembling an on-campus sexual-assault inquiry, but, Creighton says, without the same concern for protecting the accuser.

“I was repeatedly told that this isn’t a Title IX matter, and while I understand that, I am speaking my truth to make sure that our Association takes a hard look in the mirror before it claims national leadership on sexual misconduct,” Creighton wrote in her letter.

The ASCA’s leadership had never been faced with a claim like Creighton’s before, according to Anthony Icenogle, the group’s attorney. As student conduct officials, they knew how to investigate sexual assault without the involvement of law enforcement. But in an interview with Mother Jones, Creighton says the inquiry did not reflect their training. “The processes that we run on our campuses are designed to be fundamentally fair to everyone involved,” she says. “At no moment was I provided with fairness.” Among other things, Creighton says that Casares was allowed to hear and respond to her presentation to the board, while she wasn’t allowed to do the same for his.

“The scope of our process was to determine whether or not there was board member misconduct,” says Jennifer Waller, the ASCA’s executive director. “Although we completely adhere to as much as possible the principles of fundamental fairness, the process that ensues from that is very different from a campus process.” (The ASCA later released a letter outlining the procedures they followed in Creighton’s case).

Upon receiving Creighton’s claim, the board’s first move was to temporarily suspend both her and Casares. The ASCA then hired an independent investigator, attorney Shannon Hutcheson, to help determine whether the board should impeach him.

Hutcheson’s investigation, however, leaned on “ancillary witnesses,” Icenogle says—people who could testify to Creighton and Casares’s general honesty. Icenogle made a point to say that Casares and Creighton had gone to multiple bars. (“This wasn’t a one-transaction event.”) Still, Hutcheson “didn’t go through the process of going to the bars,” Icenogle said. “There’s a possibility there could have been third-party witnesses, but nobody was identified to us.” After almost six weeks and at least $30,000 in expenses, Hutcheson presented her conclusion to the ASCA board: Creighton’s story “could not be substantiated.”

The board’s deliberations remain under wraps, but Casares stepped down on January 29, according to an ASCA letter released on February 4. He remains a member, with “the same rights as other members to attend and present at ASCA events,” the letter says.

The decision to allow Casares to appear at last week’s conference is part of what prompted Creighton to go public with her story. She posted the letter to her Twitter timeline on February 3, after Casares’ presentation on “trauma-informed” sexual-assault investigations. “I felt unsafe in ASCA,” Creighton’s letter says. “I also could not stand the hypocrisy of Jason parading his expertise on Title IX, knowing how he had behaved with me,” she wrote, adding:

This is not something the Association can afford to be ambivalent about. We cannot claim national leadership in addressing sexual misconduct, only to fail miserably in our first test within our own Association…I don’t want to hurt the Association by speaking out, I want to strengthen it, cause us introspection that this can happen even within our own profession, and challenge us to walk our talk not just on our campuses, but in all phases of our professional engagement.

Casares’ lawyer has discussed a possible defamation suit against Creighton. And if an ASCA member makes a complaint about Creighton’s conduct, Waller confirms, she could receive a warning or even face impeachment from the board.

For now, Creighton remains the ASCA’s newest president-elect, though she will take a leave of absence from the organization rather than immediately stepping into the role of president. “These are my friends and colleagues and my professional family,” Creighton says. “To me, it felt like the safest place in the world where I could have possibly reported, and it turned out to be the exact opposite.”