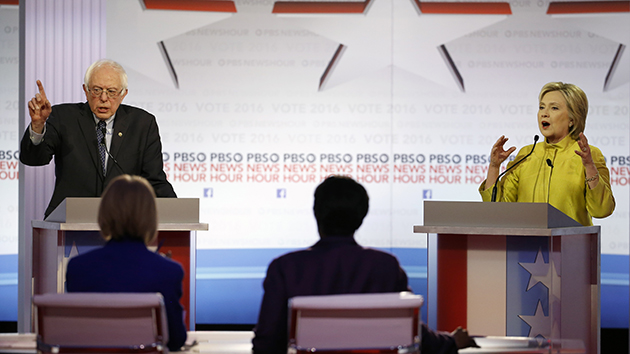 Let’s dispel once and for all the notion that Hillary Clinton and Bernie Sanders don’t know what they’re doing—they know exactly what they’re doing, and on Thursday night in Milwaukee, at the second Democratic presidential debate since the field narrowed to two candidates, they sparred over the issues that will define their contest going forward, without moving the needle in any obvious direction. The two-hour debate, moderated by Judy Woodruff and Gwen Ifill of PBS, put the candidates on the spot on issues of race and gender, while returning again and again to the themes that dominated their earlier meetings: Wall Street, Medicare, and the Middle East.

Both candidates made an effort to shore up earlier weak spots. Sanders had a ready response on charges he’d stood in the way of immigration reform; Clinton continued to insulate herself from accusations that she was a pawn of corporate interests, and she used her relationship with President Barack Obama as the rough equivalent of a character reference in a job interview. Whatever the consequences, Clinton and Sanders will be stuck with them for a while. The next scheduled debate isn’t until March 6—five days after Super Tuesday.

Here are the top moments of Thursday’s debate:

Sanders lands the first zinger of the night. Promising to raise taxes on the wealthy and close loopholes, Clinton explained, “Once I’m in the White House, we will have enough political capital to be able to do that.”

Sanders sensed an opening, and when it was his turn to speak, he quickly responded, “Well, Secretary Clinton, you’re not in the White House yet.”

Sanders: My election would be historic, too. Ifill asked Sanders whether it worried him that he might be “the instrument of thwarting history, as Sen. Clinton keeps claiming, that she might be the first woman president?”

His response was that his election would also be historic. “Well, you know, I think, from a historical point of view, somebody with my background, somebody with my views, somebody who has spent his entire life taking on the big-money interests, I think a Sanders victory would be of some historical accomplishment, as well,” he said.

“Absolutely,” Sanders responded. “Because what we will do is say, instead of giving tax breaks to billionaires, we are going to create millions of jobs for low-income kids so they’re not hanging out on street corners. We’re going to make sure that those kids stay in school or are able to get a college education. And I think when you give low-income kids—African American, white, Latino kids—the opportunities to get their lives together, they are not going to end up in jail. They’re going to end up in the productive economy, which is where we want them.”

Clinton: No, women who vote for Sanders aren’t going to hell. Asked why she lost 55 percent of the votes from women in New Hampshire, Clinton took an optimistic stance. “I have spent my entire adult life making sure that women are empowered to make their own choices, even if that choice is not to vote for me,” she said.

Later, she added, “I have no argument with anyone making up her mind about who to support. I just hope that by the end of this campaign there will be a lot more supporting me. That’s what I’m working toward.” When Woodruff followed up with a question about Clinton’s surrogate Madeleine Albright, who suggested that “there’s a special place in hell” for women who don’t support other women, Clinton noted that it was hardly the first time Albright had said that. Then she hit a lighter note: “Just for a historic aside, somebody told me earlier today we’ve had like 200 presidential primary debates, and this is the first time there have been a majority of women on the stage. So, you know, we’ll take our progress wherever we can find it.”

Clinton isn’t backing down from her health care attacks. Off the bat, Sanders wouldn’t answer a question on how much government he considered too much government, opting instead to talk up the merits of the government programs he’s proposing to expand. So Clinton decided to draw the line for him, perhaps previewing a line of argument we’ll hear more of in the weeks to come. “I think that the best analysis that I’ve seen based on Senator Sanders’ plans is that it would probably increase the size of the federal government by about 40 percent,” she said. From there they returned to the fight that has defined their domestic policy debate since before the Iowa caucuses: the efficacy of his Medicare-for-all health care proposal.

Sanders says Clinton wanted to send back child migrants. When the subject turned to immigration, Clinton reminded the audience, as she had before, that Sanders had opposed comprehensive immigration reform when it came before the Senate in 2007. This time Sanders had a counterargument of his own. Acknowledging that it was one area where he had broken with the president, he noted that Clinton said in 2014 that Central American migrants who come across the southern border should be sent back. (It was only in January that Clinton came out against deportation.)

When Clinton responded that she was simply trying to send a message to families to stop sending their children on a dangerous journey, Sanders pounced. “I don’t know to whom you’re sending a message,” he said. “Who are you sending a message to? These are children who are leaving countries and neighborhoods where their lives are at stake. That was the fact. I don’t think we use them to send a message. I think we welcome them into this country and do the best we can to help them get their lives together.”

Clinton: A vote in 2002 is not a plan to defeat ISIS. After Sanders noted—as he has in the other debates—that he voted against the Iraq War and Clinton voted for it, Clinton decided to fight back. “I do not believe a vote in 2002 is a plan to defeat ISIS in 2016,” she said. “It’s very important we focus on the threats we face today, and that we understand the complicated and dangerous world we are in.” The implication was clear: On foreign policy, Clinton believes Sanders is a one-trick pony.

Sanders says what progressives have always felt about Henry Kissinger. Clinton has for a long time called Henry Kissinger, who served as secretary of state under President Richard Nixon, a “friend,” and in the last debate boasted that Kissinger had lauded her tenure as secretary of state. On Thursday night, Sanders took aim at Clinton for her coziness with Kissinger, whom this publication has called a “guy with lots of blood on his hands.” Sanders said:

Clinton tries to capitalize on Trump’s “dangerous” attacks on Muslims. When they weren’t butting heads on health care and the Nixon administration, the candidates saved at least a few barbs for the targets of their shared opposition. Asked about voters who fear their kids will be sent off to another unwinnable war, Clinton pivoted to address the elephant in the room. “We need to understand that American Muslims are on the front line of our defense,” she said. “They are more likely to know what’s happening in their families and their communities, and they need to feel not just invited, but welcomed within the American society. So when somebody like Donald Trump and others stirs up the demagoguery against American Muslims, that hurts us at home. It’s not only offensive; it’s dangerous.”

Sanders: “One of us ran against Barack Obama. I was not that candidate.” At the end of the debate, one of the tensest moments came when Clinton suggested that Sanders did not give Obama enough credit for his accomplishments, noting that Sanders wrote a blurb for a new book about how Obama has let progressives down. Sanders took umbrage, rebutting that senators are allowed to disagree with the president. Clinton came back at him by referencing Sanders’ comments in 2011 in which the senator spoke favorably about the idea of a progressive primary challenger to Obama. (Sanders has denied that he was trying to recruit a challenger.)

The standoff finally ended when Sanders declared, “One of us ran against Barack Obama. I was not that candidate.”