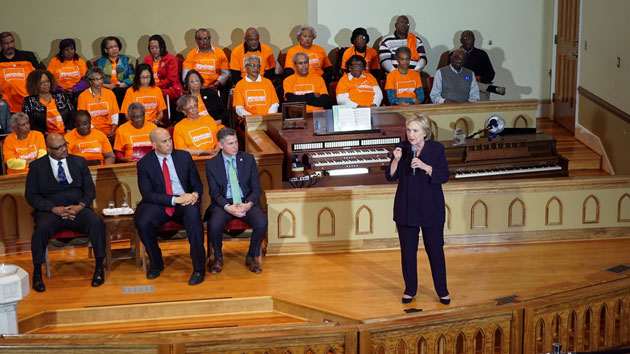 Hillary Clinton couldn’t beat Barack Obama in South Carolina, so she did the next best thing. She worked for him.

The networks declared Clinton the winner of Saturday’s South Carolina primary as soon as the polls closed on Saturday night, handing the former secretary of state a crushing victory in a state that her opponent, Bernie Sanders, had tried hard to win over but then mostly ignored in the final week of the race. Eight years after her 29-point loss to Obama here signaled the beginning of the end of her campaign (even if she didn’t know it at the time), her victory over the Vermont senator was meant to make a broader statement about her opponent’s viability in states that aren’t solidly white.

Clinton’s most powerful surrogates were the mothers of five African Americans who died in police custody or as a result of gun violence.

Just days away from Super Tuesday, Clinton poured her resources into the South’s first primary state, dispatching her husband, Bill, back to the campaign trail. But her most powerful surrogates were the mothers of five African Americans who died in police custody or as a result of gun violence; they spoke to small groups at black churches in counties where Obama had run up some of his biggest margins. Clinton’s strategy was obvious: She won by doing everything she didn’t do the last time. Clinton wrapped herself in the legacy of the man who defeated her. She talked relentlessly about gun control and systemic racism. And she tried to ease voters’ lingering distrust by couching her message in deeply spiritual overtones here in the heart of the religious left. Hillary Clinton found religion in South Carolina, in the most literal sense.

Introducing the former first lady at a crowded black church in Florence on Thursday, New Jersey Sen. Cory Booker mentioned “faith” 16 times in the final 90 seconds of his speech. Clinton picked up right where he left off. “I couldn’t help but think about the many, many hours of my life that I have spent in a church like this one,” she said.

“Somebody once asked me a long time ago when my husband was president if I was a praying person,” she added, drawing a murmur from the crowd. “I said, ‘Well, I am, but if you’ve ever lived in the White House you know you have to be—there’s just no alternative to it.'” That got some laughs.

“And I think our country right now needs faithfulness, doesn’t it?” said Clinton.

“Yes it does!” shouted an audience member.

The mothers’ stops at churches in Holly Hill and Sumter began with prayer and delved into biblical understandings of trial and grief. Lucia McBath, the mother of the slain Florida teen Jordan Davis, told one audience that “we’ve turned away from God, and that is the reason why we’re seeing what’s happening in this country.”

It helped that Clinton is a Methodist who can recite 1 Corinthians 13 from memory.

It was part of a pattern. A Clinton campaign ad airing in the state in the final week of the primary began with a lingering close-up shot of a church, as Morgan Freeman explains, “Her church taught her to do all the good you can for all the people you can, for as long as you can.” A radio ad featured a black pastor who recalled reading his Bible at a bakery when Clinton walked in. “She gently asked me what was I studying,” he said. “I said ‘1 Corinthians 13.’ And what happened next, I’ll never forget.  She said, ‘Love is patient, love is kind,’ and went on to recite the rest of the verses by heart.”

You find the voters where they are, and you speak to them in the language they speak, and in South Carolina, it means you go to a lot of churches. It helped, though, that Clinton is a Methodist who can recite 1 Corinthians 13 from memory, while Bernie Sanders is Jewish and doesn’t like to talk about it. It wasn’t pernicious, but it was real. On Sunday, Sanders made an unannounced visit, accompanied by former NAACP president Ben Jealous, to the historic Brookland Baptist Church in West Columbia. He delivered a version of his stump speech and was greeted politely but unenthusiastically. Three days later, Clinton received a series of ovations at the same church while speaking to a luncheon of Alpha Kappa Alpha sorority sisters. She wanted to talk about second chances.

“At a CNN town hall, the poet laureate of South Carolina asked me about forgiveness,” Clinton said. “I don’t know if any of you were able to see it, but it may have been one of the more important questions I’ve been asked over the course of this campaign. What, she asked, could we do to try to promote the idea of forgiveness in our country? I told her I couldn’t have been standing there without having been forgiven and learning how to forgive over the course of my life.”

This time around, Clinton is intimating that her opponent’s coalition is too white to win.

Clinton got some amens for that, but her biggest ovation, there and elsewhere, came when she talked about her good friend, President Barack Obama. Eight years ago, after Obama had won the overwhelming majority of African American voters in the state that she’d been counting on as a firewall, she shifted gears, making a protracted but doomed argument that her black opponent couldn’t win white working-class voters like she could.

This time around, Clinton is intimating that her opponent’s coalition is too white to win. She’s casting herself as the natural follow-up to the Obama administration, pledging to back him up 100 percent on whomever he nominates for the Supreme Court and to protect the Affordable Care Act against Republican attacks. “We all worked hard to elect President Barack Obama eight years ago,” an African American woman said in a radio ad paid for by Clinton’s super-PAC. “We need a president who will build on all that President Obama has done. President Obama trusted Hillary Clinton to be America’s secretary of state.” Voters seemed to buy that argument; the most common explanation I heard from Obama backers as to why they’d moved to Clinton was the fact that she’d worked with him.

Sanders’ campaign had worked for months to chip away at Clinton’s lead in the state by exploiting a generational divide, as he had done with great success in Iowa, New Hampshire, and Nevada. He courted young, activist-minded African American voters at the state’s historically black colleges, and in the final weeks he criticized his opponent’s past support for welfare reform and the 1994 crime bill. But he seemed to recognize the long odds.

At Sanders’ only South Carolina campaign rally of the week, a team of surrogates, including the rapper Killer Mike, told students at Claflin University, a historically black college, that Clinton had enabled a “genocide” of black youths and had told Black Lives Matter activists to “shut up.” Killer Mike reminded them about an incident on Wednesday at a Clinton fundraiser in Charleston, where Clinton backers chided a young African American woman who had asked the candidate about her past use of the racially charged term “super-predators.” When it was Sanders’ turn, he told them that the Clinton administration’s welfare reform efforts in the 1990s had doubled the number of Americans living in extreme poverty.

The voters Sanders was seeking were out there. Several I spoke with at Claflin brought up Sanders’ embrace of Black Lives Matter and his civil rights activism in the 1960s. Another was leaning toward Sanders because the black academic Cornel West had come to Orangeburg to campaign on his behalf. Everyone wanted to hear more about Sanders’ plan to make public universities free. There just weren’t enough of those voters. As Sanders and his surrogates talked down the Clinton record and railed against money in politics and mass incarceration, the floor at Claflin was half empty, and the handful of students in the bleachers looked like they were killing time before dinner.

One reason for the poor showing? There was another rally happening across campus, at neighboring South Carolina State University—for Hillary Clinton.