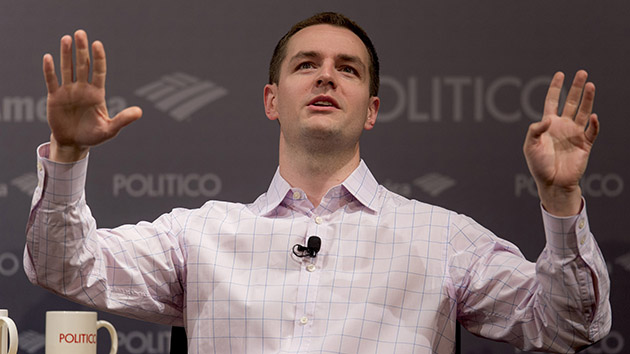 After a difficult start to her campaign for the Democratic presidential nomination, with a narrow win in Iowa and a bad loss to Bernie Sanders Tuesday night in New Hampshire, Hillary Clinton needs a major boost. Fortunately for her, the next state to cast its votes is much more favorable territory for the presumed front-runner. Part of her advantage in Nevada, which holds its Democratic caucuses on February 20, is demographic: It’s a far more diverse state than the lily-white ones that kicked off the contest. But Clinton is also counting on a secret weapon to dominate the ground game in Nevada and deliver her a decisive win: campaign manager Robby Mook.

The 36-year-old Mook first rose to fame in Clintonland after he oversaw Clinton’s 2008 Nevada caucus campaign, where she won 51 percent of the popular vote. (Barack Obama actually netted more delegates from the state, thanks to the convoluted math of the caucus system.) After glowing reviews of his Nevada performance, Mook was entrusted with managing Clinton’s efforts in other important territories: Ohio, Indiana, and Puerto Rico—all of which she went on to win. “Robby was instrumental in her winning them,” one member of the 2008 Clinton campaign’s leadership told me last spring when Mook took the job atop Clinton’s 2016 nationwide campaign.

As Andy Kroll and I explained in a profile of Mook last spring, Mook was an outlier in Clinton’s 2008 campaign. He’d gotten his start in presidential politics directing field work for Howard Dean’s 2004 New Hampshire campaign. The Deaniacs ran an unconventional organization for the time. In the summer of 2003, they brought in Marshall Ganz, a Harvard lecturer and expert on community organizing who, over a weekend of trust exercises and yurt camping, instructed the Dean campaign on how to build an army of volunteers that would create an ever-expanding pool of fans working to convince their neighbors and friends to vote for Dean.

That organizing ethos was fully embraced by the 2008 Obama team that had brought on a number of former Dean staffers. But save for Mook and his state campaigns, the approach was disregarded by a 2008 Clinton operation that focused mainly on message testing and fundraising at the national headquarters. 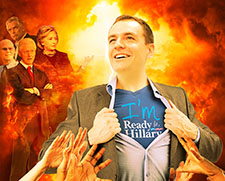 Read more about why Robby Mook has the hardest job in politics.

This time around, Mook has infused the entire Clinton campaign with that organizer’s spirit and stocked it with his old aides, self-proclaimed members of the “Mook Mafia” that formed in Nevada in 2008.

Clinton’s Nevada organization is headed by Emmy Ruiz, a member of the Mook Mafia who started out as a field organizer in Las Vegas in June 2007. She ended up running Latino outreach in the state for Mook before the 2008 caucuses and returned to Nevada to manage Obama’s winning general election effort there in 2012. “She went to the Robby Mook school of political organizing,” says Rory Reid, the son of Senate Minority Leader Harry Reid who served as Clinton’s 2008 Nevada state chairman and is supporting her informally this year. “Robby’s influence is significant.”

I asked Ruiz if she’s trying to replicate the Ganz-style community-based organizing that Mook used last time. “Absolutely!” she responded. “We’ve been able to bring together a lot of the best practices of different organizing styles. Similar to what we ran with Robby in 2008, there’s a high emphasis on community outreach and empowering precinct captains to really take ownership of organizing their communities.”

Ruiz says the Clinton campaign is benefiting from the ground-game emphasis of 2008, with precinct captains from the last campaign signing up to help out again. “It feels like déjà vu all over again,” Reid says. “It’s the same kind of effort.”

Much like Mook, who once unhappily suffered through a Céline Dion concert just to win support from a local LGBT group, Ruiz has placed a big emphasis on microtargeting to appeal to the interests of groups across the state, a strategy involving what she calls “culturally competent community programs.” Those include “Caucus Conmigo” for Latinos, listening tours on Native American reservations, a dinner organized for Filipino groups, and poetry slams in African American communities.

Whether that organizing will result in a Clinton win in Nevada isn’t clear. Relative to the first two contests of the primary season, in Iowa and New Hampshire, there is remarkably limited polling in Nevada. Caucuses are always harder to poll than standard elections, with unpredictable turnout. Since the middle of last summer, there have been just two independent polls of the Democratic race in the state, according to RealClearPolitics: one from October that had Clinton ahead 50 to 34 percent, and one from December that showed Clinton beating Sanders 50 to 27 percent.

After disappointing outcomes in Iowa and New Hampshire, her margin of victory may not be quite so large, but there are plenty of reasons to expect a better result for Clinton than in the first two contests. Iowa and New Hampshire are both overwhelmingly non-Hispanic white—87 and 91 percent, respectively. Nevada looks a lot more like the rest of America. The state is 9 percent African American, 9 percent Asian American or Pacific Islander, and 28 percent Latino, per the US Census. Just 51 percent of the state is white alone.

Mook will have to hope those national trends hold in Nevada. On Monday, Politico reported that Hillary and Bill Clinton were dissatisfied with the campaign staff and preparing shakeups for after the New Hampshire primary. As Kroll and I wrote to conclude our profile of Mook:

At this early stage, it’s unknown whether stocking the Clinton campaign with Mook mafiosi can bring order and discipline to Planet Hillary. No doubt, a series of contretemps, slipups, and scandals (real or trumped-up) will hit the Clinton campaign in the months to come. And in the past—with or without scandals—the competing elements of Clintonworld have always seemed to find a way to create conflict of their own.

Nevada is supposed to be a firewall for Clinton after a rocky start to the campaign. If Mook can expand on his 2008 performance there, he could help launch a series of statewide victories and quiet any talk of a campaign in disarray. But the Clinton campaign’s chief spokesman was already casting doubt on its chances in Nevada on Tuesday in an effort to lower expectations. If that fire starts to flame out, Clinton’s trajectory might start to look a lot like it did in 2008, and Mook could suffer the fate that’s befallen Clinton’s past managers.