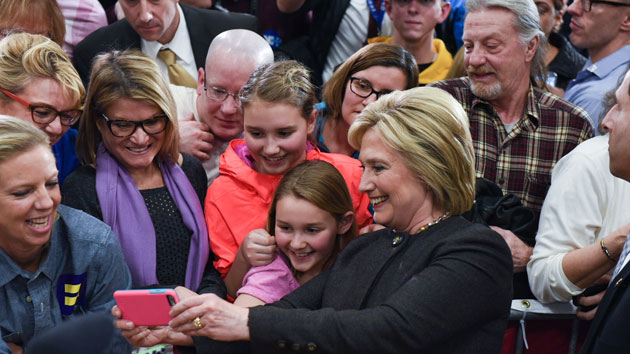 Hillary Clinton had some company at a rally for campaign volunteers in Manchester, New Hampshire, on Friday afternoon: four Democratic women who serve as US senators, and a fifth, New Hampshire Gov. Maggie Hassan, who wants to join them next January. As she makes her final push in a state whose first-in-the-nation primary she won eight years ago, Clinton is traveling with a group of prominent women politicians who are saying explicitly what she dances around—that electing the first woman president would be a big effing deal, and you should absolutely think about that when you go to the polls.

“This is the torch that must be passed on, that you’ll be passing on when you’re out there door-knocking—you know how important this historical moment is for us,” said Sen. Amy Klobuchar of Minnesota. She told a story about a photo of her late mother with Clinton that she keeps on her desk, and related an anecdote about a hearing of the Senate Finance Committee on the subject of paid maternity leave. “A male Republican across the table says, ‘Well, I don’t know why that’d be mandatory, I never had to use it,'” Klobuchar recalled. “Without missing a beat, Sen. Debbie Stabenow said, ‘I bet your mother did!'” The audience ate it up.

Stabenow, from Michigan, used her five minutes to tear into the sexist standards female candidates are subjected to—something that flared up recently when the Washington Post‘s Bob Woodward (among other male pundits) suggested the former secretary of state shouted too much. Stabenow was blunt:

Anyone see the movie Sufragette, yeah? You need to see that if you haven’t. We’re almost at the 100th anniversary of the women’s right to vote. But there’s always a message we get about we’re too this or too that. Wait your turn. You smile too much, you must not be serious. You don’t smile enough, you must not be friendly! You talk too much and you’re too serious and you know, I wouldn’t want to have a beer with you—or I would want to have a beer with you but you can’t run security for your country. Your hair! You know, that—Donald Trump’s hair! What about that hair! Come on! So let me say this, and I say this particularly to the women. Guys, you can listen, but the women: Don’t do this. Don’t do this. This is the moment.

The presence of Klobuchar, Stabenow, and Sens. Kirsten Gillibrand of New York and Jeanne Shaheen of New Hampshire had another effect: It reminded voters that, notwithstanding her claim to not be a member of the Democratic establishment, Clinton has the backing of almost all of Sanders’ colleagues in the Senate Democratic caucus. And they’re not shy about explaining why.