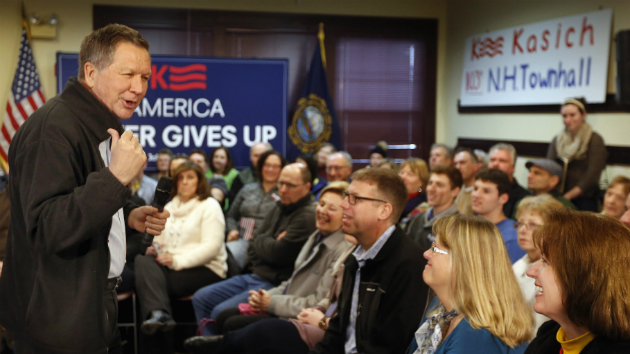 It was half a day before New Hampshire voters would start voting in the year’s first presidential primary, and John Kasich was talking about slowing down—how everyone should slow down. As a snowstorm struck, he was in the Searles Chapel in Windham speaking to about 100 people, a fifth of whom were college students from North Carolina, and the Ohio governor, who according to the latest poll was essentially in a four-way tie for second in the GOP race, began his talk by saying he was “trying to get the right pitch.” By that, he meant tone. And then it got strange. He meandered for a couple of minutes, discussing his failed presidential campaign of 16 years ago and griping that even in the Granite State campaigning has become less intimate. Then he talked for a bit about his parents’ death in a 1987 car crash, noting this “nightmare” made him “so much more sensitive to problems people have.” He then segued into a long, contemplative riff about modern-day society. “Speed,” he said. “Our lives are being lived so fast. We’re constantly on the device. The Apple TV…Have to get the new Apple phone.” He held up an iPhone, as he continued: “We have to slow our lives down and listen to people’s hurts and victories.” He repeated this call to de-accelerate: “When we do…it’s a more beautiful world.” Members of the audience were listening attentively but several looked puzzled. And Kasich gazed toward the stained glass at the back of the chapel and said with a sigh, “So why don’t we slow down and listen and help one another?”

This was hardly the conventional way to rouse a crowd the day prior to an election. And this moment demonstrated that Kasich is the oddest of the elected officials in the Republican contest. A former chair of the House budget committee when he was a congressman, Kasich has long been known as a policy wonk and champion of Reaganomics. But on the campaign trail, he has become an elegiac prophet, lamenting the detachment of modern life. At a town hall meeting the day before at Concord High School, Kasich offered a similar take: “I think many of us just feel lonely. We don’t know where to go. There’s nobody around to celebrate some of our victories. Sometimes there’s nobody around to sit and cry with us. Don’t we want that back in our country again?…Everybody on this Earth is connected. We’re just a part of a mosaic in a moment of time. And when people are broken, it hurts all of us.”

These are not the words of an anxious politician locked in make-or-break contest. And when Kasich finally got around to speaking about politics and policy at these two events, and at a town hall on Monday morning in Plaistow, he still acted like he was in a different race than the GOP election of 2016. He did not directly mention ISIS, and he said nothing negative about President Barack Obama. In fact, in Plaistow, Kasich remarked, “Look, I have trouble with Republicans, too. I have to talk to them seriously about stuff, it’s not always easy.” The only fear he referenced at these events was fear of the national debt—his town hall sessions feature a debt clock ticking away with great speed—and, out of character for a GOP contender, he did not denounce Obama for the country’s fiscal problems.

A cynic might say this is no more than a ploy to win over independents and those Republicans who are not mainlining the anger, rage, and hatred being dished out by Donald Trump, Marco Rubio, Ted Cruz, and Chris Christie. Kasich’s softer and introspective approach certainly is no accident. A super-PAC supporting him has been airing an ad on Christian radio stations that eschews politics and features Kasich pondering his parents’ death: “It sent me into a sea of darkness and real struggle, but out of that I was transformed. My parents did not die in vain…That’s the motivation for me. The issue is what you do with your life to make things a little bit better in the world in which you live.”

Yet Kasich seems to be consciously offering New Hampshire-ites something of a throwback candidate. He’s not prepackaged, and he’s no sound bite machine. He rambles from topic to topic. He makes not-so-funny, dad-type jokes. And he doesn’t seem desperate. He doesn’t target his GOP competitors. In Windham, he didn’t refer to any GOP rivals, until a voter asked him about Jeb Bush’s criticism that Kasich had been involved in closing military bases when he was in Congress. (Kasich provided a long explanation.)

He doesn’t even push the Hillary button to win over Republican voters. In his opening remarks in Windham, Kasich said nothing about the possible Democratic nominee. When asked whether he was too soft to take her on in the general election—”You seem to be a really nice guy… How will you hit back at Hillary?…You need to get a little bit dirty”—Kasich did say he would bring up the email controversy and talk about Libya (not Benghazi, of course, but the Obama administration’s policy in Libya). He pointed out that he was a likeable and positive guy, “but don’t try to get in my face.” To back up that assertion, he noted that in his high school, the kids would accept it if another team beat their school’s football team, “but we would break every window on your bus.”

Kasich’s demeanor—a weird blend of happy-go-luckiness and mournful contemplation—is a change of pace in the GOP field dominated so far by hard-chargers trying to outdo their rivals. (In Washington, Kasich did have the reputation for being a tad arrogant and quick to anger.) Still, when Kasich got around to covering policy in Windham—and he does enjoy rattling off the specifics—it’s familiar conservative fare: cutting taxes, decrying regulations, shrinking government, downsizing entitlements, and transferring social programs from the federal government to the states. In denouncing big government, he declared, “you shouldn’t replace any federal worker.” That is, when a federal employee leaves a job, that position should be eliminated. This is quite the radical proposal. (What if the guy or gal leaving the job is a State Department specialist on Syria?) Kasich didn’t bash Obamacare when he proposed reforming it, insisting that no one with preexisting conditions should lose his or her insurance. “That is un-American,” he remarked. But when asked to name a favorite Supreme Court justice, he did say, “I do like Scalia because he’s a unique person.”

After the Windham town hall was done, Kasich posed for a few photos, but he didn’t stay long. At one point, he wandered around at the front of the chapel, as if he was looking for something to do. Then an aide grabbed him and escorted him out. Several voters afterward each expressed a similar appraisal: He seems like a real nice and smart guy. Yet each of them also asked, can someone like this win?

“I’m an independent guy,” Kasich told the voters in Windham. “I’m not way out there.” But he is, in a way. As a Republican, he stands out as a candidate rejecting the main GOP and conservative memes of 2016. And one wonders just what the pensive Kasich will say if Republican voters tell him not just to slow down, but to stop and go home.