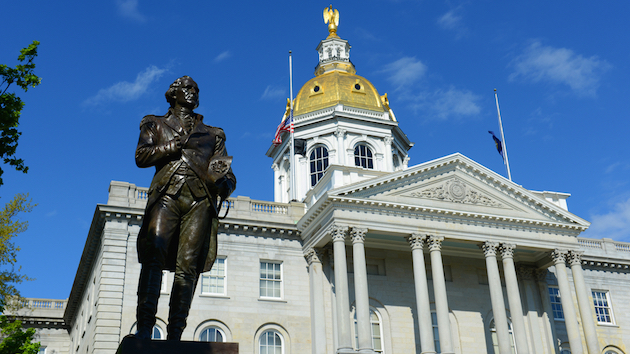 On February 18, hundreds of libertarians will flock to the Radisson Hotel in Manchester, New Hampshire, for the ninth annual Liberty Forum, a four-day conference featuring presentations on topics such as religious freedom, school choice, and “Anarchy: Dressing for Success.” A big draw will be Edward Snowden’s keynote speech, delivered over a live video stream. As the exiled NSA whistleblower speaks, conference goers may mull their own flight from government oppression—not to Russia, but to the haven of New Hampshire.

The Free State Project, which runs the Liberty Forum, has spent 15 years trying to recruit 20,000 libertarian-minded activists to take up residence in the Granite State. By accruing a critical mass of small-government advocates in a state with just 1.3 million people, the project seeks to exert substantial influence on state politics to create a utopia of social liberties and deregulated markets. Those who sign the Free State pledge promise to make the move to New Hampshire once 20,000 participants have signed up. Now, with 19,858 signers, the project’s organizers say they are finally recruiting the last of those volunteers.

However, the organizers readily admit they don’t know how many of the would-be Free Staters will actually come to New Hampshire. “That is the million-dollar question,” says Free State Project president Carla Gericke. “It’s all speculative at this stage.” The most fervent believers are likely already in the state. Free State Project founder Jason Sorens says he expects about a third of the remaining signers to move. The group plans to track down those who may have forgotten and nudge them with direct mail, phone calls, and email reminders about their commitment.

Organizers admit they don’t know how many would-be Free Staters will actually come to New Hampshire. “That is the million-dollar question,” says Carla Gericke.

Sorens first published his idea for the Free State Project in 2001, when he was a PhD student in Yale’s political science department. In an article in the Libertarian Enterprise webzine, Soren fantasized about a place where state and local budgets would be slashed and federal highway funds would be rejected. By 2003, a community of several thousand Free State Project pledgers had coalesced online and were debating the relative merits of colonizing Idaho, Wyoming, or Alaska. Then a delegation met with then-New Hampshire Gov. Craig Benson, a Republican, who told them, “Come on up. We’d love to have you.”

Since then, 1,909 early movers have settled in New Hampshire, according to organizers. They have started a church, installed Bitcoin ATMs, and protested against an Uber ban. One Free Stater became a school board chairwoman and then used tax money to pay private school tuition for kids in her district. Free Staters in Grafton tried to declare their no-stoplight town a United Nations-free zone. In Keene, libertarian transplants upset old-timers by videotaping and challenging parking officers enforcing “the king’s tariff.”

Influencing state policy remains a major goal for many participants. According to the project, it’s gotten more than 40 “pro-liberty” legislators elected. At least 18 early movers currently hold seats in the State House. The New Hampshire Liberty Alliance, a tea-party-aligned nonprofit that Soren says was “founded by native libertarians in expectation that the Free State Project would be coming,” has become a force in state politics.

Still, it only became obvious recently that the project would hit its 20,000-pledge trigger. Last fall, after years of standing around conferences with clipboards and taking out advertisements in Reason magazine, the project’s organizers turned to Facebook. More than 2,500 new participants signed on during a four-month ad campaign targeting users who “liked” pages for Bitcoin, “voluntarism,” and George Carlin. In recent weeks, the group has ramped up its Facebook ad spending to $500 a day. Nearly 20 early movers have been arriving in New Hampshire each month—even in winter. “I really hope we can build something that’s historic,” Gericke says. “People are coming.”

That’s good news for Mark Warden, owner and lead agent at Porcupine Real Estate in Manchester, which does about 90 percent of its business with early movers. (Libertarians have adopted the porcupine, a peaceful creature that defends itself when attacked, as their mascot.) “A lot of my clients want to be self-sufficient—whether that’s living off the grid and growing their own food, wanting to shoot and hunt on their own property, or being able tor raise pigs and chickens without zoning laws interfering,” says Warden, who shows his properties with a gun on his hip. “We speak the same language.”

Warden also offers advice to aspiring politicians, setting them up in towns where they would have a chance of winning over voters. Warden is a former state legislator whose old campaign website touts an A+ rating from the Koch-backed Americans for Prosperity. He once argued for decriminalizing simple assault during a committee hearing, later apologizing for claiming that some people may “like being in abusive relationships”.

Some future Free Staters say they’re drawn by the free-market business opportunities. Nelson Aquino, a Boston-based sales executive, plans to move in a matter of weeks. Aquino says he’s looking for a community that understands his opposition to police violence and torture, and he also plans to invest: “The people who are willing to make that type of pledge are people who believe in personal responsibility, people who believe in contracts, people who follow through on their word,” he says. “Those are the people I want to do business with.”

John Bush, who tried to start a Texas version of the project called Lone Star Libertopia, intends to open a New Hampshire branch of his Austin-based bookstore, which sells volumes on homesteading and crypto-anarchism alongside nutritional supplements and water filtration systems. “We intend to build some wealth—properties and wealth,” Bush says. “The early movers are what making it all so sexy and attractive.”

Nineteen-year-old Bradley Hunt, who signed the pledge about a year ago, says he was bummed out when he heard the project was reaching its target—he’d wanted to be an early mover. He’s unhappy living in Michigan but doesn’t have enough savings to pick up and go. In the meantime, he volunteers for the local Libertarian Party, joins jury nullification protests, and tries to boycott the US dollar. He envisions himself and his girlfriend buying a little property in the northern end of New Hampshire in two or three years.

“The only thing I can see stopping me from moving is if I go to jail for my activism or if I get in a car accident or die or something,” he says. In the Free State, “I would have to start over again—but I’m okay with that.”