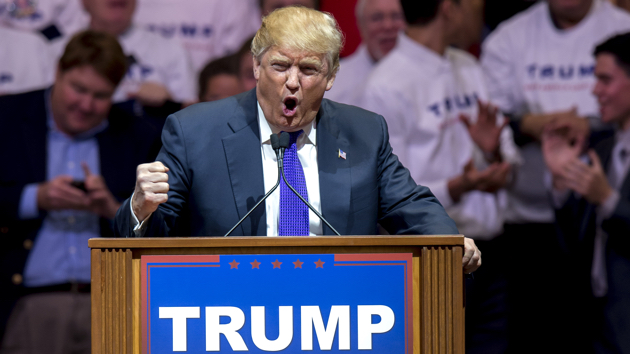 Donald Trump speaks at a rally at a Las Vegas casino the night before the Nevada caucuses.Brian Cahn/ZUMA

If any state was going to cement Donald Trump’s front-runner status in the race for the Republican presidential nomination, it’s fitting that Nevada should be the one to do the job.

Las Vegas dominates the state’s politics—more than 70 percent of the state population lives in the city or surrounding Clark County—and Trump is perfectly suited to the city’s glitz and bombast. His giant Trump Tower gleams right off the Vegas strip, standing apart from the clustered pack of casino resorts, where everyone can see his name from far and wide. This is a place that forgives sin in the name of fun, gravitates toward the newest shiny object, and is willing to look the other way at uncouth behavior. It’s a place where winning is everything.

And win he did. Trump was declared the victor of the Nevada Republican caucuses by TV networks shortly after caucus precincts began reporting results, with Marco Rubio and Ted Cruz tussling over second place, just as they did three days ago in Trump’s win in the South Carolina primary. Rubio didn’t bother to stick around in the state to watch results, instead departing earlier Tuesday for the Super Tuesday states that will vote next week. John Kasich, who didn’t even campaign in Nevada this week, and Ben Carson were an afterthought, even if their decisions to stay in the race are taking a toll on Rubio and Cruz.

Nevada was the first contest without Jeb Bush, the candidate the media had once anointed as the front-runner, and who suspended his campaign after finishing fourth in South Carolina. Now there can be little doubt that Trump is the favorite to gain the nomination. He’s finished in a dominant first place in three of the four states that have voted so far, with three consecutive wins following a second-place showing in Iowa.

Nevada was supposed to be Rubio’s firewall, a state where he spent part of his childhood and one that has a sizable Latino population. Rubio did pick up a swath of endorsements from establishment Republicans once Bush dropped out, but actual Republican voters appear unswayed.

And really, Nevada was natural territory for Trump all along. Even apart from Las Vegas, the state’s Republican Party has more of a libertarian tinge than the national GOP, with voters who are more likely to forgive Trump’s past dalliances with socially liberal policies. Trump’s populist message and anti-trade refrains resonated well in the state hit hardest by the Great Recession and foreclosure crisis.

On Monday night, Trump held a rally at a casino arena just south of the Vegas strip, drawing a crowd that he said numbered 8,000. (By comparison, only 33,000 Republicans showed up to vote in the state’s caucuses in 2012.) Early in his stump speech, he brought up the leaked video of an executive at a Carrier air-conditioning plant announcing that the company would be moving manufacturing to Mexico, costing Indianapolis 1,400 jobs in the process. “It’s very sad,” Trump said. “And there’s nothing we’re going to do about it, unless we get very smart and tough.” Trump pledged that he’d impose a 35 percent tax on each air-conditioning unit the company tries to sell in the United States, drawing loud applause from his fans. “We’ve got to put our country back together,” he said. “It’s a mess.”

But the rally was a useful reminder of the violent tone Trump’s campaign has taken. “Get him the hell out,” Trump said when the evening’s first protester stood up in the crowd. No other presidential campaign needs a PSA before rallies begin warning audience members not to get physical with protesters, and to let security handle removing them from the venue.

Trump himself contradicted that advice, imagining a violent assault on another protester being led out by security. “We’re not allowed to punch back anymore,” he said. “I love the old days. You know what they used to do to guys like that when they were in a place like this? They’d be carried out in a stretcher, folks.” Trump himself sounded as if he wanted to hop down and help the crowd rough up the protesters, saying, “I’d like to punch him in the face.”

That outlook isn’t just how Trump approaches tussles with an unruly crowd; it’s the same tone he takes with foreign policy. “We’re gonna knock the hell out of them, folks,” Trump said of ISIS on Monday. He pledged to bring back waterboarding—and said this form of torture wasn’t sufficient. “I think it’s great,” he said, “but I don’t think we go far enough.”

Before Trump spoke, Joe Arpaio, the notoriously anti-immigrant sheriff of Maricopa County, Arizona, took the stage to warm applause from Trump’s crowd. He said he’d invited Hillary Clinton to swing by his infamous tent city jail, and that he’d “even give her a free pair of pink underwear,” referring to a tactic he’s used to emasculate prisoners in his care.

The coarse language Trump employs and associates with could hurt him in a general election. But for now, it’s just boosting his profile among fed-up Republican voters.

“We’re not going to be the dummies anymore, folks,” Trump said at his Monday rally, after the audience cheered his call to make Mexico pay to build a wall on the border. “We’re going to be the smart ones.”