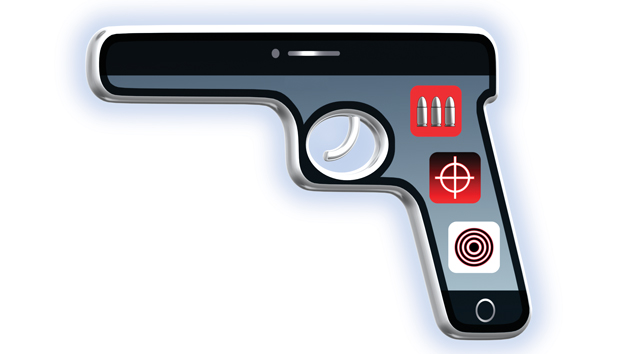 Jonathan Mossberg wanted to be the Steve Jobs of firearms.

In 1999, a few years before the invention of the iPod, Mossberg began to build the iGun, a computer-chip-equipped “smart gun” that could only be fired by its owner. (The “i” stands for intelligence.) He saw the technology as a commonsense way to prevent gun violence—a no-brainer safety device like seatbelts or air bags. The iGun is a shotgun equipped with a radio frequency identification (RFID) sensor that only allows it to be fired by someone wearing a special ring. By 2000, a fully functional version had endured a grueling round of military-grade testing and was ready to hit the market. “When I filed my patents, my patent attorney said, ‘You’ve got the next dot-com,'” Mossberg recalls. “He was blown away.”

Mossberg wasn’t the first person to envision a smart gun, but he was well positioned to make it a reality. He was a scion of O.F. Mossberg & Sons, the nation’s oldest family-owned gun company, which makes one of the world’s best-selling lines of pump-action shotguns. He’d overseen manufacturing for the company and had also served as president of Uzi America, an importer of Israeli weapons.

But the iGun hit a wall. Consumers were skeptical, in part because gun rights groups had been painting smart guns as a Trojan horse for gun grabbers. A few years earlier, gun manufacturer Colt had unveiled a smart-watch-activated pistol, and Smith & Wesson had pledged to explore “authorized user technology” for its weapons. Both projects were abandoned in the face of withering criticism from the National Rifle Association, which led a boycott of Smith & Wesson. In 2005, under pressure from the NRA, Congress passed the Protection of Lawful Commerce in Arms Act, making gun manufacturers immune from lawsuits related to gun accidents or misuse—and removing another incentive to develop smart guns. (Today, the NRA says it doesn’t oppose smart guns but claims they are an attempt to make firearms more expensive and “would allow guns to be disabled remotely.”)

Ever since, no major firearms maker has touched the smart-gun concept—including O.F. Mossberg & Sons. “They are doing so well that they have little to gain,” Mossberg says of his family’s company (which he left in 2000). Though they see the benefits of smart guns, “should this turn into a Smith & Wesson boycott-type thing, they don’t want to be associated with that. And I don’t blame them.”

After shelving the iGun for more than a decade, Mossberg has reloaded. Americans’ trust in consumer electronics has grown, along with their concern about gun violence and safety. “The whole thing has gained a lot of momentum again,” says Mossberg, who today owns the exclusive rights to produce and market the iGun. He says he receives emails nearly every day asking about its price and availability.

A new survey shows that nearly 60 percent of Americans, if they were to buy a new handgun, would be willing to purchase a smart gun.

Silicon chips have shrunk to the point that Mossberg can produce a 9 mm handgun version of the iGun, tapping a much larger market. While O.F. Mossberg & Sons’ research once suggested that gun owners were skeptical of weapons containing circuit boards, a 2013 survey by the National Shooting Sports Foundation, the gun manufacturers’ trade association, found that 14 percent of all gun owners were somewhat or very likely to buy smart guns. Though the NSSF spun those results as bad for smart guns, Mossberg sees an opportunity potentially worth hundreds of millions of dollars. “I know lots of people who would love to get 14 percent of the firearms market,” he says. And new research shows the market could be much bigger. A nationally representative survey published by researchers at Johns Hopkins University in December found that nearly 60 percent of Americans, if they were to buy a new handgun, would be willing to purchase a smart gun.

Police departments have also come around to the concept of issuing firearms that can’t be used by bad guys. More than 5 percent of officers killed in the line of duty are shot with their own weapons, often 9 mm handguns. In November, San Francisco Police Chief Greg Suhr told 60 Minutes that he wanted his officers to have the option to carry smart guns if they were available. More than a dozen law enforcement agencies in New York, New Jersey, Connecticut, and Florida have tested the iGun in recent months, according to Mossberg.

Smart guns have also gained a powerful ally in Washington. In January, President Obama directed the Justice Department, Homeland Security, and the Department of Defense to develop a strategy to promote smart gun research and expedite government procurement of the weapons.

To bring a smart pistol to market, Mossberg says he needs to raise about $1 million for research and development—money that almost certainly won’t come from O.F. Mossberg & Sons or any other major firearms company. Following the 2012 Sandy Hook massacre, Silicon Valley angel investor Ron Conway announced an effort to fund start-up companies dedicated to promoting gun safety. Conway’s Smart Tech Challenges Foundation gave Mossberg a grant of $100,000, which helped generate buzz for smart guns in the Valley. Yet nearly two years later, not a single venture capital firm has backed a smart-gun company. Margot Hirsch, the president of Smart Tech Challenges, says tech investors didn’t have smart guns on their radar in the past, but she hopes that now “the VC community and impact investors will be interested in investing, not only to make money, but to save lives.”

Mossberg sees no reason why his product should be controversial. “In the 1700s and 1800s, there was still no manual safety device on a gun,” he observes, referring to the safety catches that are now ubiquitous on American handguns and rifles. “And then somebody put one on there and nobody cared. This is nothing more than that.”