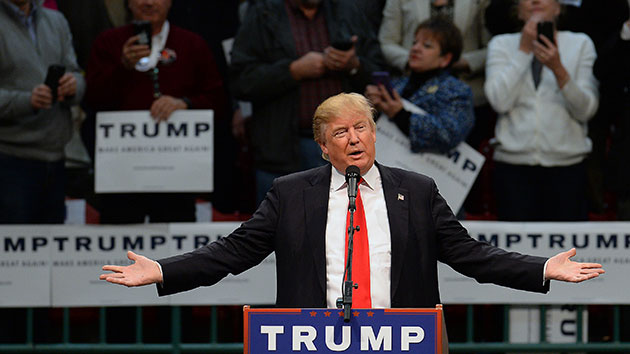 A newly formed political action committee is using Donald Trump’s name and trademarked slogan—”Make America Great Again”—in an unusual fundraising ploy. The group, the Great America PAC, has no connection to the Trump campaign, but it has been blasting out emails soliciting donations that it claims will be channeled directly to Team Trump. In a recent email, the PAC implored donors to help “build a grassroots wall of support around Donald Trump by chipping in at least $5 to have your name placed on his official FEC report by signing the ‘I Support Donald Trump’ petition.” On the PAC’s website, donors are asked to donate between $5 and $1,000.

The website notes that the first $5 of each donation will be sent to the Trump campaign. And Dan Backer, the group’s treasurer, tells Mother Jones that this money is indeed “earmarked” for Trump. What happens to the rest of the money, for any donations greater than $5, is not clear. The email does promise to use money the group raises to build a vaguely described grassroots operation that will help support Trump. But there’s no telling how much of the money gathered by this Trumpy PAC will directly fund pro-Trump activities.

The fundraising email is signed by Amy Kremer, a former chairman of the Tea Party Express. Kremer did not respond to a request for comment.

A recipient of the email might be forgiven for assuming it comes from an official Trump-approved outfit. The website prominently features the official Trump slogan: “Make America Great Again.” And there may be a problem with that. Trump trademarked that phrase for the purposes of “political campaign services, namely, promoting public awareness of Donald J. Trump as a candidate for public office; providing online information regarding political issues and the 2016 presidential election;” and for “fundraising in the field of politics.” The Trump campaign did not respond to a request for comment.

Asked about the PAC’s use of the trademarked phrase, Backer, a Virginia-based attorney who has helped set up a number of conservative-oriented PACs that capitalize on current events, said the phrase is a quote from Ronald Reagan.

The Great America PAC was first registered with the Federal Election Commission on February 1. But it paid to run pro-Trump radio ads in Iowa in January—which is legal. The ads, which cost a total of $25,000, were produced and placed on air by a mysterious ad-buying firm called GRP Buying LLC, using a rented mailbox at a shipping center in Columbus, Ohio. The PAC has also spent $10,000 on television ads and $15,000 on email blasts.

Initially, this PAC tried to associate itself even more closely with Trump by using the name TrumPAC. But a PAC may not use a candidate’s name if it doesn’t have the candidate’s permission. (For example, last year a super-PAC backing Carly Fiorina was forced to create an elaborate acronym to keep its name: CARLY for America.) When the FEC contacted the PAC in February and inquired about its use of the TrumPAC name, Backer, an FEC critic who was the lawyer in a key Supreme Court case two years ago that removed caps on how much money donors can contribute to political campaigns and committees, had a sharp response. In a letter to the FEC, he stated he didn’t know anyone running for office named “TRUMPAC.” He informed the FEC that another party, whom he did not identify, had requested it change its name and that it would do so, but not because the FEC asked.

So how much has the Great America PAC raised with its Trumpish solicitations? It doesn’t have to file any disclosure reports until late March.