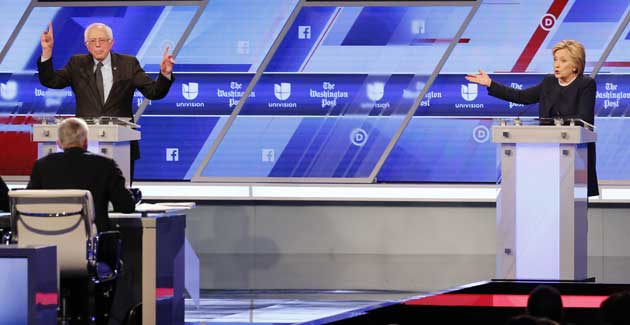 Hillary Clinton and Bernie Sanders met in Miami on Wednesday night for a debate that focused largely on immigration. The candidates clashed over their immigration records, including the failed effort to pass comprehensive reform in 2007. Both vowed to end most deportations and to expand President Barack Obama’s executive actions allowing some undocumented immigrants to remain in the United States temporarily.

The debate—co-sponsored by Univision, CNN, Facebook, and the Washington Post—comes on the heals of Sanders’ surprise victory in the Michigan primary and less than a week before the next set of high-stakes primaries on March 15. The moderators didn’t shy away from posing tough questions. They grilled Clinton on her emails, the 2012 terrorist attack in Benghazi, Libya, and the perception among voters that she is not trustworthy; they questioned Sanders about past votes and comments on immigration, as well as long-ago statements praising Cuban dictator Fidel Castro and Daniel Ortega, the president of Nicaragua and a leader in the Sandinista movement in the 1980s.

Here are some highlights from the debate.

“I’m not even answering that question.” Univision host Jorge Ramos grilled Clinton on her email scandal and asked twice whether Clinton would drop out of the race if she were indicted. After he asked the question a second time, Clinton had enough.

“Oh, for goodness, that’s not going to happen,” she said. “I’m not even answering that question.”

Is Donald Trump racist? That question was posed to both Clinton and Sanders, neither of whom would say explicitly that Trump is a bigot. Here’s how Clinton responded.

I think it’s un-American. I think what he has promoted is not at all in keeping with American values, Karen. And I am going to take every opportunity to criticize him, to raise those issues.

I’m not going to engage in the kind of language that he uses. I think we can make the case against him if he is the nominee, by pointing out what he has said, what he claims to believe, in the values he’s promoting, and I think that’s a better way for the American people to draw their conclusions.

Sanders predicts voters will never elect Trump. When Sanders was asked whether Trump is a racist, here’s how he responded:

“I think that the American people are never going to elect a president who insults Mexicans, who insults Muslims, who insults women, who insults African Americans. And let us not forget that several years ago, Trump was in the middle of the so-called birther movement, trying to delegitimize the president of the United States of America.”

Clinton and Sanders pledge to most stop deportations. Whereas Trump and Ted Cruz are promising to deport the 11 million undocumented immigrants in this country, Sanders and Clinton both pledged Wednesday night to halt almost all deportations.

Ramos pressed Clinton on whether she would deport undocumented children as president. “I will not deport children,” she said. “I do not want to deport family members, either, Jorge. I want to, as I said, prioritize who would be deported: violent criminals, people planning terrorist attacks, anybody who threatens us. That’s a relatively small universe.”

Sanders agreed: “No, I will not deport children from the United States of America.”

“And can you promise not to deport immigrants who don’t have a criminal record?” Ramos asked. “I can make that promise,” Sanders responded.

Bernie Sanders says he will not deport children from the U.S., nor immigrants without a criminal record #DemDebate pic.twitter.com/GdNGwDljEA

Clinton: “I am not a natural politician.” The moderators questioned Clinton on why, according to one poll, only 37 percent of Americans consider her honest and trustworthy. Clinton took the moment to take responsibility for her low ratings on the question of honesty and say she hoped to earn the public’s trust.

“I am not a natural politician, in case you haven’t noticed, like my husband or President Obama,” Clinton responded. “So I have a view that I just have to do the best I can, get the results I can, make a difference in people’s lives, and hope that people see that I’m fighting for them and that I can improve conditions economically and other ways that will benefit them and their families.”