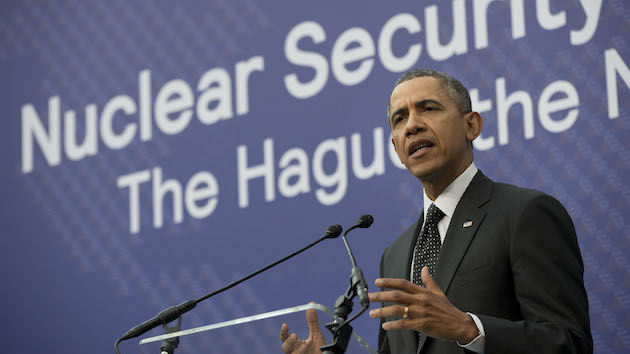 Today President Barack Obama will host his fourth and final Nuclear Security Summit, where global heads of state gather to brainstorm how to keep their nuclear materials from falling into the hands of terrorists. While nuclear proliferation has taken a back burner to hotter foreign policy topics like ISIS, terrorism, and the refugee crisis in Europe, experts from the Arms Control Association say the summits have been “one of the administration’s most important achievement on foreign policy.”

Here’s what you need to know about the upcoming meeting:

What’s it all about? The first summit was held in Washington, DC, in 2010, and has happened every two years since then. This year’s summit, featuring representatives from 56 countries, is the last one in the works for now. The event is an opportunity to “raise awareness of the risk of nuclear terrorism and to secure weapons-usable material in the civilian sector,” says Kelsey Davenport, the director of nonproliferation policy at the Arms Control Association, a nonproliferation think tank. Such civilian material makes up only 15 percent of the world’s stockpile of nuclear material, so the summit covers a fairly small part of the overall problem. But it still allows heads of state and security officials to trade ideas on how to keep nuclear materials safe, and gets countries together to announce new security pledges and agreements. That’s an important step since there’s no legally binding international pact on how countries are supposed to keep nuclear materials safe. “The overall system really remains sort of a patchwork of voluntary initiatives and regime,” Davenport says.

Do these summits actually get anything done? Kingston Reif, the Arms Control Association’s director for disarmament and threat reduction policy, says yes; he puts the summits up there with the Iran deal and a 2010 arms-reduction treaty with Russia as Obama’s key achievements in the nuclear arena. “The summit process has been largely successful in reducing the risk posed by nuclear terrorism,” he says.

At the 2014 summit, 35 countries pledged to make their domestic nuclear safety rules match the guidelines set by the International Atomic Energy Agency, marking a big improvement in safety standards. Countries are now more willing to share information and accept international inspections, Davenport says. “The [IAEA] has a service where teams go in and inspect the physical protection of the facilities and then make recommendations,” she explains. “They’ve become sort of a standard practice, something that states with an interest in nuclear security are really committed to.”

This year, Davenport says, participants will probably focus on keeping this cooperation going after Obama leaves office and the summits end.

What’s not going right? Some of the world’s most important nuclear players don’t always play ball. Chinese President Xi Jinping is attending the summit, but China has yet to take part in any of the joint statements the summits have produced over the years. And Russia, the country with more nuclear sites than any other, isn’t sending anyone to the summit this year. White House Deputy National Security Adviser Ben Rhodes told reporters this is “a missed opportunity…Frankly, all they’re doing is isolating themselves in not participating as they have in the past.”

Davenport sees another missed opportunity: failing to invite Iran to the summit for the first time now that the Islamic Republic has signed a nuclear deal. “Iran, as part of the nuclear deal, needs to take steps to strengthen its nuclear security and safety,” she says. “I think it would’ve been good for Iran to publicly commit to fulfilling these steps and look for other countries that it could work with on a multilateral basis.”

How big of a deal is this for Obama? Obama came into office talking a good game about nuclear security and has delivered some big results like the Iran deal, Reif says, but he has “lost focus and momentum” over the years. He and Davenport say rising tensions with Russia and the hostility between Obama and Congress have played a role, but the administration also hasn’t done itself any favors. Reif points out that, as Mother Jones reported two years ago, the budget for nuclear safety has decreased steadily while Obama has pumped more money into upgrading America’s nuclear weapons at “an unprecedented clip.” Those budget numbers have been a “disappointment,” Reif says, “and they have led to a slowing and postponing of some important nuclear security work.”