The morning after I contacted the Defense Department, I got a voice mail message. “Man, we were looking at your query from yesterday on the UFO stuff,” the public affairs officer said. He sounded as if he was trying not to laugh. “You’re killing us.”

He read aloud some of the questions I’d sent: “Which presidents have asked about UFOs? Does the president have the security clearance to know about UFOs? What happens if extraterrestrials show up?” He alternated between chuckles and exasperated sighs. “Which office handles UFOs? Dude, really? I don’t know how to—we don’t have that.” He trailed off laughing. “I don’t know how to answer these questions, man.”

Most people in Washington don’t know how to answer those questions—or at least say they don’t. But Stephen Bassett, America’s only registered lobbyist on UFO and extraterrestrial issues, is convinced that the government has this information and it’s only a matter of time before the president “announces to the American people that we’re not alone.” This much-anticipated mind-blowing moment, known among some UFO enthusiasts as the “disclosure,” will officially confirm that “there are extraterrestrials, not only elsewhere, but engaging us now.” 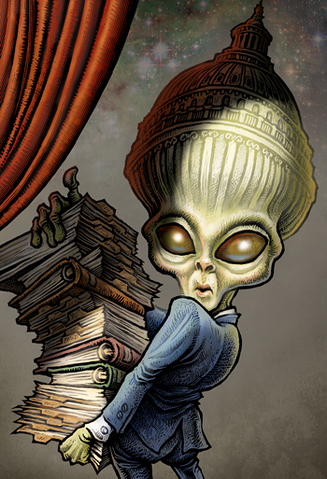 “It’s solid,” Bassett says about the proof that aliens have visited Earth. We are having lunch at the National Press Club, and his piercing blue eyes are fixed on me. “Not going to apologize for that. Facts are facts.” Bassett is dressed in a crisp black shirt and black pants; he is almost always dressed in all black. He has spent the last 20 of his 69 years working the Hill, barraging politicians and journalists with letters, faxes, emails, and, more recently, tweets urging them to force the government to reveal its interplanetary secrets.

“The nature of what I do almost demands that the person that gets into it has pretty much nothing going for them,” Bassett explains. “You can’t have a wife. You can’t have kids that have got to go to college.”

Bassett’s turning point came in 1995, when he read Abduction: Human Encounters With Aliens, by the late Harvard psychiatry professor John Mack, who counseled people who claimed to have had contact with aliens. After a short stint volunteering for Mack’s Program for Extraordinary Experience Research, Bassett concluded that there was already enough scientific evidence “to confirm the ET presence many times over. The problem was political.”

Bassett concluded that there was already enough scientific evidence “to confirm the ET presence many times over. The problem was political.”

So in 1996 he registered as Washington’s first ET issue lobbyist. In 1999 he followed up by forming the Extraterrestrial Phenomena Political Action Committee. In 2002 he ran for Congress in Maryland as an independent* on a pro-disclosure platform. (He didn’t make it past the primary.) He’s hosted several conferences on “exopolitics,” the study of relations between humans and extraterrestrials. In 2013, with a grant from a wealthy Canadian, he staged a mock congressional hearing on human-ET contact with six former members of Congress, including Alaska Sen. Mike Gravel. (They were each paid $20,000.) Bassett claims he has been in touch with unnamed staffers from 190 lawmakers’ offices to push for alien hearings.

Though he’s the only UFO lobbyist, Bassett is not the only earthling inside the Beltway intrigued by the concept of intelligent life from other worlds. Ronald Reagan and Jimmy Carter both claimed to have had UFO experiences. Ever since something crashed in Roswell, New Mexico, in 1947, the US government has investigated interplanetary craft with varying levels of official acknowledgment. In 1952, as flying-saucer mania gripped America, the Air Force launched Project Blue Book, which would become the most extensive official investigation of UFOs to date. It was mostly a public-relations effort, and the government officially got out of the UFO investigation business in 1969. But documents released since then show that the FBI, CIA, and Air Force kept up their own work on the matter.

Then there are the Clintons. During the early 1990s, the late philanthropist Laurance Rockefeller prodded the White House to release all federal UFO files. The Clintons appear to have humored the wealthy ET enthusiast; Hillary’s former law partner Webster Hubbell was tasked with digging up information on UFOs (before he was sent away for tax fraud). In 1994, the Air Force released a new review on the Roswell incident that concluded that a nuclear-detonation detection device, not a UFO, had crashed in the desert in 1947. In 1995, President Bill Clinton declassified millions of military and intelligence records. Most were not related to UFOs, but UFO buffs saw the move as an encouraging gesture.

“Secretary Clinton will not get to the White House without going through the extraterrestrial issue,” Bassett predicts.

Bassett and other UFO fans find cause for optimism in the fact that Clinton’s former chief of staff John Po­desta is chairing Hillary’s presidential campaign. In his introduction to the 2010 book UFO s: Generals, Pilots and Government Officials Go on the Record, by journalist Leslie Kean, Podesta, an avid X-Files fan, wrote, “The time to pull the curtain back on this subject is long overdue.” Bassett believes that with sufficient pressure, Hillary will reveal why her husband’s administration avoided full disclosure. The ensuing controversy, he says, will then push Congress to hold new ET hearings. “Secretary Clinton will not get to the White House without going through the extraterrestrial issue,” Bassett predicts.

Not everyone looking for answers about UFOs is on board with Bassett’s belief in alien abductions and the existence of extraterrestrial bases on Earth. “For the assertions Mr. Bassett makes, proof is needed and he has none that would stand up to scientific or journalistic scrutiny,” Kean wrote to me in an email. “Policy makers therefore cannot take his rhetoric seriously.” Nick Pope, the former head of Britain’s official UFO investigation efforts, says he respects Bassett’s “persistence” but thinks the UFO lobbyist “just doesn’t really appreciate how government works.”

Bassett remains hopeful that Hillary will prove the skeptics wrong. And if that doesn’t work? “It will be a bitter pill if I don’t make it to disclosure,” he says slowly. “That will be a bitch.”

*Bassett ran against the Republican candidate Connie Morella and Democrat Chris Van Hollen. In October 2002, after Morella threatened not to participate in a televised candidate debate, Bassett was included and raised the issue of disclosure.