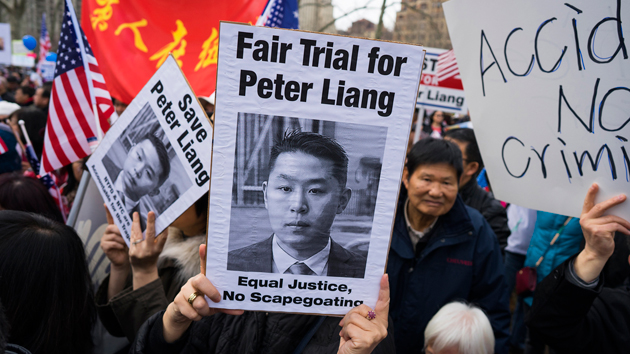 On February 11, Peter Liang became a rare statistic: He was the first New York City police officer in more than a decade to be found guilty of shooting and killing a citizen while on duty. Liang, who is Chinese American, was convicted of second-degree manslaughter and one count of official misconduct for the shooting of Akai Gurley, a 28-year-old black man and father, during an encounter in a Brooklyn housing project. In the post-Ferguson era, the case has added another twist to the intense ongoing debate about race and accountability in policing.

On the night of November 20, 2014, Gurley and a friend had just entered an unlit stairwell on the seventh floor of their building. Liang, a 28-year-old rookie cop, was on the stairwell landing above with his partner, on a “vertical patrol” assignment. Liang had his gun drawn, his attorneys told jurors, because the stairwell was dark and police officers are trained that this can be dangerous—for New York cops on vertical patrol, lack of lighting is commonly perceived as a sign of criminal activity. When Liang heard a noise come from below, he testified, he was startled and pulled the trigger of his gun by accident. The bullet ricocheted off a wall along the landing below where Gurley stood, mortally wounding him. Liang told jurors that he did not realize he had shot anyone until he went down the stairs looking for the bullet. Liang said that when he discovered Gurley bleeding on the ground, “I was panicking. I was in shock, in disbelief that someone was actually hit.”

In the aftermath, New York Police commissioner William Bratton told reporters that the shooting appeared “to be an accidental discharge, with no intention to strike anybody.” But during the trial, prosecutors zeroed in on evidence that Liang failed to administer immediate medical aid as Gurley lay bleeding to death, instead arguing with his partner over whether to call their supervisor. Gurley’s friend attempted to give him CPR after receiving instructions from a 911 dispatcher. Liang testified that he tried to request an ambulance over the radio. Transcripts from radio calls, however, did not show him calling for one.

“We kind of had a sense in our hearts that this was going to be the result, because for 150 years, there has been a common phrase in America. This phrase is called ‘Not a Chinaman’s chance.'”

Liang, whose sentencing is scheduled for April 14, was fired from the department and initially faced up to 15 years in prison. In late March, however, Brooklyn District Attorney Ken Thompson announced that he would not seek prison time for Liang. Thompson instead recommended five years of probation, including six months of home confinement, citing “the unique circumstances” of the case. On Tuesday, Liang’s lawyers asked a judge to throw out Liang’s conviction, alleging jury misconduct.

In the view of his supporters and some former prosecutors, Liang’s conviction is a glaring anomaly among cops who have killed unarmed civilians, the vast majority of whom don’t face criminal charges. Kenneth Montgomery, a former assistant prosecutor in Brooklyn and now a defense attorney, found the conviction somewhat surprising. “When you look at the spectrum of police shooting cases, this seemed to be—I want to be careful because all of these cases are of public concern—less egregious than Anthony Baez, Amadou Diallo,” he says. “It seemed to me that the defense had a lot to work with.”

Many believe Liang’s race was a factor. On February 20, in the wake of Liang’s guilty verdict, thousands of people—many of them Asian American—gathered in New York, Los Angeles, Chicago, and Washington, DC, to protest. Demonstrators charged that Liang was not afforded the same protections as other officers because of the color of his skin. Former New York City Comptroller John Liu echoed this sentiment in a speech to the crowd: “Shocking! This is not manslaughter…We kind of had a sense in our hearts that this was going to be the result, because for 150 years, there has been a common phrase in America. This phrase is called ‘Not a Chinaman’s chance.'” As the writer Jay Caspian Kang noted in a New York Times essay, the Liang protests marked “the most pivotal moment in the Asian American community since the Rodney King riots.”

Some of Liang’s supporters compared him to past Asian American victims of police brutality, and even went so far as to suggest that both Liang and Gurley were victims of the same kind of oppression. That rhetoric quickly drew heat from Black Lives Matter activists and supporters—including many Asian Americans—who found it offensive and misguided. “[I don’t care] how many “black lives matter” signs were flying at the Peter Liang protest,” organizer Johnetta Elzie tweeted. “That’s rooted in anti-blackness + supporting white supremacy.” Kang described the reactions from some Asian Americans as “the stunted language of a people who do not yet know how to talk about injustice”:

The protesters who took to the streets on Saturday are trying, in their way, to create a new political language for Asian Americans, but this language comes without any edifying history—no amount of nuance or qualification or appeal to Martin Luther King will change the fact that the first massive, nationwide Asian American protest in years was held in defense of a police officer who shot and killed an innocent black man….And yet it would be catastrophic to ignore the protesters’ concerns altogether.

Liang’s conviction is indeed rare for cops. “Ten years ago, he wouldn’t have been prosecuted,” Stephen Saltzburg, a George Washington University law professor, told The Atlantic. “And if he was, they would have acquitted him.”

One germane example comes from January 2004, when NYPD officer Richard Neri shot and killed a 19-year-old black man. Timothy Stansbury and two friends were walking up a dark stairwell to the top floor of a Brooklyn housing project while Neri was patrolling the building with another officer in the dark, their guns drawn. Neri and Stansbury arrived on opposite sides of a stairwell landing door and reached simultaneously for the handle. When the door opened, Neri fired a single shot, fatally striking Stansbury in the chest. The next day, then-New York Police Commissioner Raymond Kelly told reporters that the shooting appeared to be unjustified. Neri was suspended for 30 days and stripped of his gun, but the grand jury declined to indict him.

After Gurley’s shooting, Bratton said the NYPD would review the policy but maintained that vertical patrols were “an essential part of policing.”

Critics called it a “cold-blooded killing” and demanded the NYPD review its policy allowing officers to patrol with their weapons drawn. But the policy remained intact. After Gurley’s shooting, Bratton said the NYPD would review the policy but maintained that vertical patrols were “an essential part of policing.”

Several media reports have pointed out the parallels between the Neri and Liang cases. But a key difference between them, Montgomery explains, is that Neri made the unusual choice to testify before the grand jury. Neri told the jurors that he had his gun pointed down and his finger on the side of the barrel, in compliance with his training. When the stairwell door opened, he said, he had been startled and had not intended to fire. He said he couldn’t recall raising his arm and moving his finger to the trigger. Another key difference, Montgomery says, was that Neri’s defense showed that Neri attempted to give CPR to Stansbury.

Liang’s own choice not to testify to the grand jury may also have made a difference, according to Montgomery. “Who’s to say what would have happened if Liang went in there and was emotional?” He also noted the sway that prosecutors have in grand jury hearings, and that Thompson had a track record for successfully prosecuting officers involved in fatal shootings.

Liang’s partner during the incident, Shaun Landau, was granted immunity after he agreed to testify in the closed-door proceedings. Later, during the trial, Landau testified that he and Liang didn’t immediately realize that the gunshot had struck Gurley. He also told jurors that he’d received inadequate CPR training at the academy—and that he thought Gurley’s friend was better qualified to perform CPR at the scene. Liang and Landau both testified at trial that the CPR training they received was shoddy, prompting an internal affairs investigation that resulted in the stripping of their CPR instructor’s badge and gun.

Notably, Liang’s case appeared to lack the police union support that usually comes in the wake of officer-involved shootings. Some stories have pointed out the relative absence during Liang’s trial of the Patrolmen’s Benevolence Association, whose head Patrick Lynch has long been regarded as a controversial figure for coming to the defense of police officers accused of committing crimes—including the NYPD’s Daniel Pantaleo, whom a grand jury declined to indict for choking Eric Garner to death in July 2014. The national controversy over policing may not have helped Liang, either: His case came at a time when public confidence in the police had reached its lowest point in two decades.