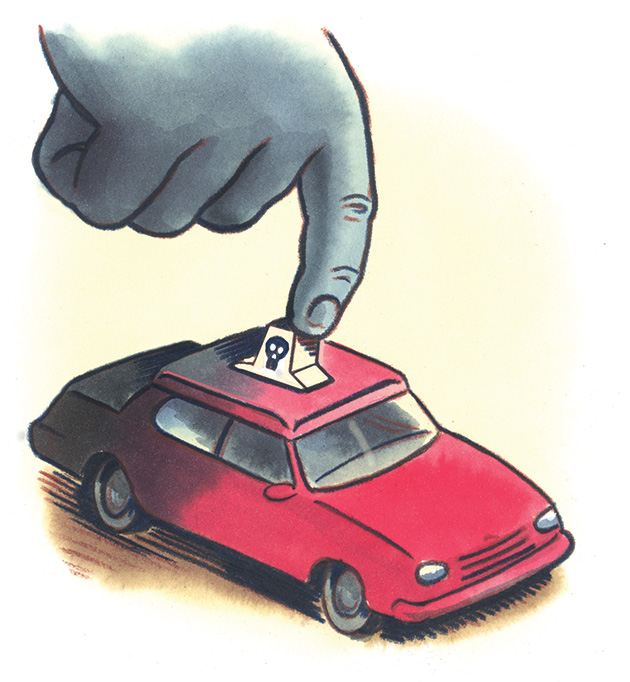 One spring evening in 2012, after getting off a shift at Señor Frog’s bar and grill in Las Vegas, Candice Smith drove to the Palace Station casino to cash her paycheck. When she returned to her car, it wouldn’t start. She knew what the problem was: the starter kill switch her lender had installed on the vehicle. To restart the car after business hours, she needed to call the device manufacturer’s hotline number and get an unlock code. That night, the process took four hours.

“These people could do whatever they wanted and there was nothing I could do to stop them.”

Smith had bought her used Chevy Cobalt the previous year, financing the purchase through a subprime auto lender called CAG Acceptance. The sales contract required Smith, whose credit score was 690—prime by most definitions—to pay $218 every two weeks for four years. The GPS-enabled kill switch would allow CAG Acceptance to disable her starter if her payments were more than 30 days late.

In 2012, after the restaurant cut back her work hours, Smith—then 29 years old and living paycheck to paycheck—did fall behind a few times, although never by 30 days. Yet her starter was disabled four times that year, she says. On one occasion, she was getting an oil change­ at the dealership that had sold her the car—a mechanic removed the device so she could leave.

Three months later, Smith received a letter from CAG Acceptance’s collections department claiming she owed more than $1,700. Smith had submitted four payments, legal research later determined, that were never cashed or credited to her account. But when Smith called to find out what had happened, the company didn’t explain. Instead, it filed a court motion to repossess her car. In the meantime, a judge ordered her to reinstall the tracking device. (When she did, Smith says, it beeped “incessantly” for three days—warning that her payment was due—before her car was disabled again.)

She hired a lawyer and in December reached a settlement with CAG Acceptance, which agreed to refund some of the uncredited payments; the car went back to the dealer. “The entire process made me feel like I had no rights,” Smith told Nevada legislators at a 2013 hearing on the devices. “These people could do whatever they wanted and there was nothing I could do to stop them.” The lawsuit left her with a dismal credit score of 324. The next time she bought a car, she told me, she paid in cash. 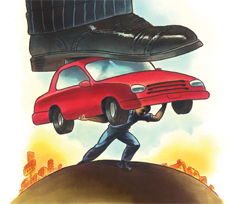 “Payment assurance” devices, as they are known throughout the industry, were first marketed in the late 1990s by a company called PassTime, but sales really took off in the 2000s, when GPS technology made it easy for lenders to find and repossess the vehicles. PassTime and its competitors also offer separate payment reminder devices that beep when a bill is due. Gadgets with some combination of these features can be found in up to 70 percent of cars financed by subprime loans, says Corinne Kirkendall, a vice president for PassTime—which Inc. magazine singled out last year as one of America’s fastest-growing companies.

This is a positive trend, insists Nicole Munro, an attorney for the Telematics Solution Provider Association, an industry trade group. By keeping borrowers on track, the technology reduces risk for lenders, thereby opening up credit for people who might not otherwise qualify. PassTime claims its technology has reduced delinquency rates for its dealers from 27 percent to 5 percent, on average.

Subprime auto dealers “are accounting for risk with the interest rates and putting on these devices.”

If payment assurance devices really reduced risk for subprime lenders, we should expect to see lower interest rates on those loans, counters Lisa Stifler, an attorney with the Center for Responsible Lending. “The reality is that subprime dealers continue to make loans at interest rates that are at the state maximum,” she says. “They’re accounting for risk with the interest rates and putting on these devices.”

Stories like Smith’s are becoming more common. In September 2014, the Legal Aid Center of Southern Nevada filed a class-action lawsuit against CAG Acceptance, claiming the company had violated state law and its own contracts by activating the devices on borrowers who were not in default. The lead plaintiff, a single mother of three, allegedly wasn’t even told her minivan contained a kill switch until after she’d made her down payment. At the time it was activated, she was late on a payment but still 20 days away from defaulting.

Lawmakers in New Jersey, New York, Nevada, and Virginia have introduced bills banning kill switches or requiring dealers and lenders to inform buyers when they install one—and to provide ample notice before activating it. California already forbids used-car dealerships that finance their own sales from requiring payment assurance devices as a loan condition, and they must give 5 to 10 days’ notice before disabling a vehicle.

Repo rates, meanwhile, are on the rise—they jumped more than 70 percent between 2013 and 2014—and there have been other danger signs in the marketplace. According to the research firm Moody’s Analytics, nearly 4 percent of people who took out car loans in early 2014 had missed at least one monthly payment by September 2015—”the highest level of early loan trouble since 2008.”

In a memo to used-car dealers last May, David Meyer, an executive vice president with PassTime rival Spireon, warned of another bubble in the making. “Lenders and dealers are going ever deeper with subprime loans,” he wrote, and they are “setting themselves up for substantial losses if and when the subprime auto-lending crisis hits.” He added that for anyone “in the business of putting people into cars when no one else will,” choosing the right vehicle-tracking system—Spireon’s, of course—was a must.