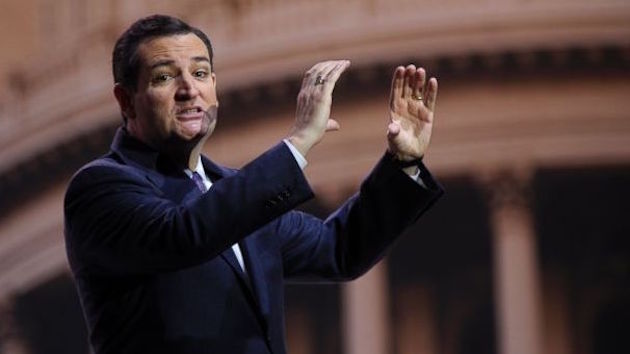 In one chapter of his campaign book, A Time for Truth, Sen. Ted Cruz proudly chronicles his days as a Texas solicitor general, a post he held from 2003 to 2008. Bolstering his conservative cred, the Republican presidential candidate notes that during his stint as the state’s chief lawyer, in front of the Supreme Court and federal and state appellate courts he defended the inclusion of “under God” in the “Pledge of Allegiance,” the display of the Ten Commandments on the grounds of the state Capitol, a congressional redistricting plan that assisted Republicans, a restrictive voter identification law, and a ban on late-term abortions. He also described cases in which he championed gun rights and defended the conviction of a Mexican citizen who raped and murdered two teenage girls in a case challenged by the World Court. Yet one case he does not mention is the time he helped defend a law criminalizing the sale of dildos.

The case was actually an important battle concerning privacy and free-speech rights. In 2004, companies that owned Austin stores selling sex toys and a retail distributor of such products challenged a Texas law outlawing the sale and promotion of supposedly obscene devices. Under the law, a person who violated the statute could go to jail for up to two years. At the time, only three states—Mississippi, Alabama, and Virginia—had similar laws. (The previous year, a Texas mother who was a sales rep for Passion Parties was arrested by two undercover cops for selling vibrators and other sex-related goods at a gathering akin to a Tupperware party for sex toys. No doubt, this had worried businesses peddling such wares.) The plaintiffs in the sex device case contended the state law violated the right to privacy under the 14th Amendment. They argued that many people in Texas used sexual devices as an aspect of their sexual experiences. They claimed that in some instances one partner in a couple might be physically unable to engage in intercourse or have a contagious disease (such as HIV), and that in these cases such devices could allow a couple to engage in safe sex.

But a federal judge sent them packing, ruling that selling sex toys was not protected by the Constitution. The plaintiffs appealed, and Cruz’s solicitor general office had the task of preserving the law.

In 2007, Cruz’s legal team, working on behalf of then-Attorney General Greg Abbott (who now is the governor), filed a 76-page brief calling on the US Court of Appeals for the 5th Circuit to uphold the lower court’s decision and permit the law to stand. The filing noted, “The Texas Penal Code prohibits the advertisement and sale of dildos, artificial vaginas, and other obscene devices” but does not “forbid the private use of such devices.” The plaintiffs had argued that this case was similar to Lawrence v. Texas, the landmark 2003 Supreme Court decision that struck down Texas’ law against sodomy. But Cruz’s office countered that Lawrence “focused on interpersonal relationships and the privacy of the home” and that the law being challenged did not block the “private use of obscene devices.” Cruz’s legal team asserted that “obscene devices do not implicate any liberty interest.” And its brief added that “any alleged right associated with obscene devices” is not “deeply rooted in the Nation’s history and traditions.” In other words, Texans were free to use sex toys at home, but they did not have the right to buy them.

The brief insisted that Texas, in order to protect “public morals,” had  “police-power interests” in “discouraging prurient interests in sexual gratification, combating the commercial sale of sex, and protecting minors.” There was a  “government” interest, it maintained, in “discouraging…autonomous sex.” The brief compared the use of sex toys to “hiring a willing prostitute or engaging in consensual bigamy,” and it equated advertising these products with the commercial promotion of prostitution. In perhaps the most noticeable line of the brief, Cruz’s office declared, “There is no substantive-due-process right to stimulate one’s genitals for non-medical purposes unrelated to procreation or outside of an interpersonal relationship.” That is, the pursuit of such happiness had no constitutional standing. And the brief argued there was no “right to promote dildos, vibrators, and other obscene devices.” The plaintiffs, it noted, were “free to engage in unfettered noncommercial speech touting the uses of obscene devices,” but not speech designed to generate the sale of these items.

The brief by Cruz’s office compared the use of sex toys to “hiring a willing prostitute or engaging in consensual bigamy,” and it equated advertising these products with the commercial promotion of prostitution.

Summing up, the judges declared, “The case is not about public sex. It is not about controlling commerce in sex. It is about controlling what people do in the privacy of their own homes because the State is morally opposed to a certain type of consensual private intimate conduct. This is an insufficient justification for the statute after Lawrence…Whatever one might think or believe about the use of these devices, government interference with their personal and private use violates the Constitution.”

The appeals court had rejected the arguments from Cruz’s office and said no to Big Government policing the morals of citizens. But Abbott and Cruz wouldn’t give up. Of course, they might have initially felt obligated to mount a defense of this state law. But after it had been shot down, they pressed ahead, relying on the same puritanical and excessive arguments to justify government intrusion. Abbott and Cruz quickly filed a brief asking the full court of appeals to hear the case, claiming the three-judge panel had extended the scope of Lawrence too far. This brief suggested that if the decision stood, some people would argue that “engaging in consensual adult incest or bigamy” ought to be legal because it could “enhance their sexual experiences.” And Cruz’s office filed another brief noting it was considering taking this case to the Supreme Court.

The day after the appeals court wiped out the Texas law, Cruz forwarded an email to the lawyer in his office who had overseen the briefs in the case. It included a blog post from legal expert Eugene Volokh headlined, “Dildoes Going to the Supreme Court?” and a sympathetic note from William Thro, then the solicitor general of Virginia. “Having had the experience of answering questions about oral sex from a female State Supreme Court Justice who is also a grandmother,” Thro wrote Cruz, “you have my sympathy. 🙂 Seriously, if you do go for cert [with the Supreme Court] and if we can help, let me know.” But for whatever reason—Cruz certainly doesn’t explain in his book—Abbott and he did not take the dildo ban to the Supreme Court. And Cruz, who was already thinking about running for elected office, missed out on the chance to gain national attention as an advocate for the just-say-no-to-vibrators cause. Imagine how his political career might have been affected had Cruz become the public face for the anti-dildos movement.