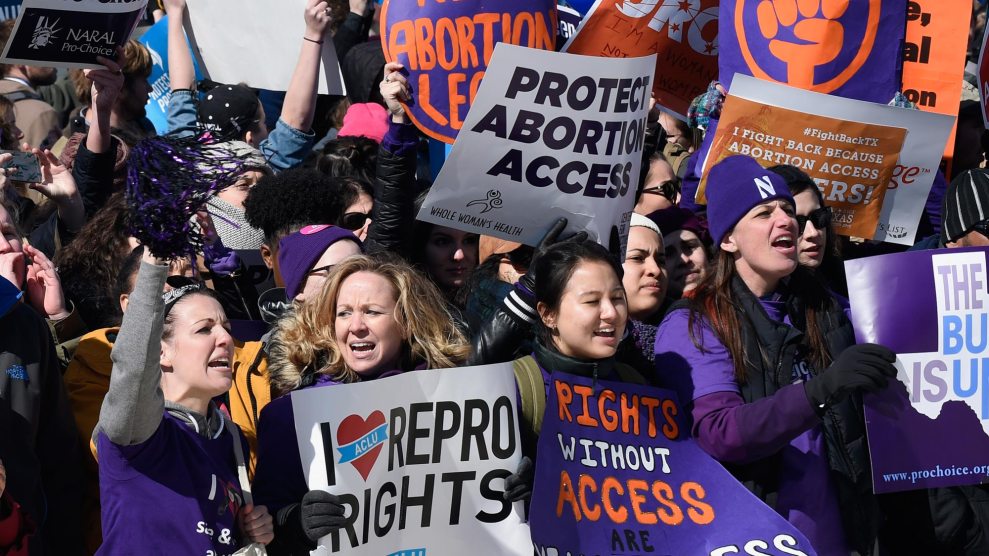 In a new study published Wednesday, researchers from the World Health Organization and the Guttmacher Institute examine abortion and contraceptive access throughout the world. The report, in the British medical journal The Lancet, highlights major disparities in trends for women in wealthier nations compared with those in poorer countries.

The researchers looked at country data on abortion prevalence, contraceptive use by method, and unmet need for contraception in order to analyze trends across every major region and subregion between 1990 and 2014. They came to several illuminating conclusions:

The percent of pregnancies that end in abortion increased in poorer nations and fell in wealthy countries: Between 1990 and 1994, in developed countries 38 percent of pregnancies were terminated; between 2010 and 2014, that rate fell to 28 percent. In developing countries, however, the proportion increased—from 21 percent between 1990 and 1994 to 24 percent from 2010 to 2014. In Latin America—where more than 97 percent of women of childbearing age live in countries where abortion is banned—about 1 in 3 pregnancies between 2010 and 2014 ended in abortion. This rate was higher than that of any other region.

Three-quarters of abortions across all regions were performed on married women: This challenges the notion that most abortions are sought by unwed women or irresponsible teenagers.

Strict abortion restrictions didn’t necessarily lead to a significant decrease in the rate of abortion: For example, the study’s authors note that across the 53 countries where abortion is completely illegal or only permitted to save a woman’s life, the rate of abortions is 37 per 1,000 women. In the countries where abortion is legal, the rate is 34 abortions per 1,000 women. That’s in part because women living in countries with more restrictive abortion laws are also more likely to have an unmet need for contraception. “This adds to the incidence of abortion in countries with restrictive laws,” the Guttmacher Institute’s Dr. Gilda Sedgh, the lead author of the study, said in a statement.

The researchers don’t have complete data on what percent of abortions are done in unsafe conditions but know that “nearly 300 million dollars are spent each year on treating the complications from unsafe abortions,” said Dr. Bela Ganatra from the World Health Organization in a statement.

“The obvious interpretation is that criminalising abortion does not prevent it but, rather, drives women to seek illegal services or methods,” wrote Diana Greene Foster, a professor at the University of California, San Francisco, in a commentary responding to The Lancet study.

But Greene Foster also points out in her commentary that some of these findings don’t provide the full picture. “This simple story overlooks the many women who, in the absence of safe legal services, carry unwanted pregnancies to term,” she writes. “As a consequence of increased rates of unintended pregnancy and unsafe abortion, such women face an increased risk of maternal mortality and bear children that they are not ready to care for and often cannot afford.”