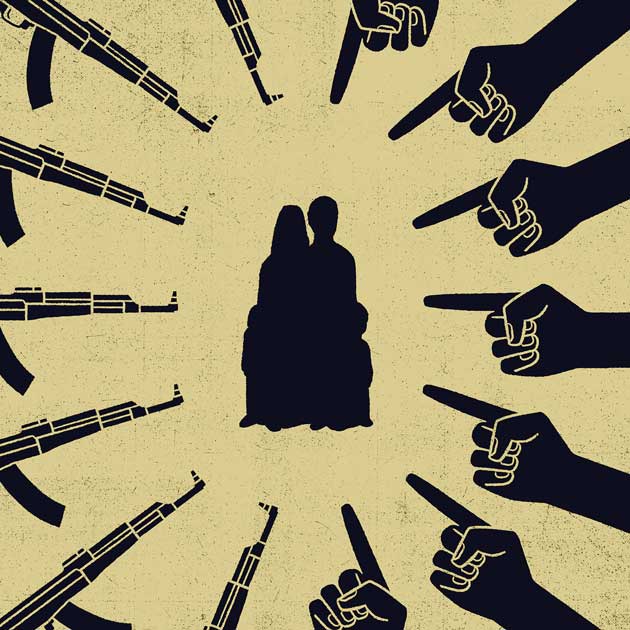 The couple who had panicked the nation’s right-wing politicians and pundits sits on a couch in a spartan ground-level apartment on the outskirts of San Bernardino, California. Thirty-two-year-old Samer is in a blue sweatshirt and jeans, lounging next to his wife, Sara. He has a round face and relaxed eyes; she is more angular, her eyes more direct. They’re both wearing ankle monitors. Ever since they were released from Immigration and Customs Enforcement (ICE) detention two months earlier, they’ve kept a low profile. It took me weeks to contact them, and now they’ve agreed to tell their story. But they have some caveats: no real names, not too many details. They don’t want to stir up any more trouble than they’ve already been through.

Eight months before I met them, they were in Syria, on the phone with a smuggler. ISIS fighters were on the fringes of their small Christian village, firing mortars into it. Samer and Sara knew if the village fell there was a good chance they’d be abused or executed. There was no power, no work, and the price of food was punishing. Part of their home was blown up. Their little boys, two and five years old, were “afraid all the time,” Sara recalls. They almost never ventured outdoors. Of Syria, Samer says, “It is not a life.” So they decided to seek a new one—in America, where they hoped to join Samer’s parents and sister, who live in California.

The smuggler told them he could help, in exchange for everything they had—a valuable tract of land, the remains of their home, and all its contents. The smuggler’s network stretched across the globe, and he arranged to get them to Lebanon, then Turkey, where they waited three months before being supplied with expertly forged European passports—they won’t say which nationality—and plane tickets to Brazil. From there, they traveled north. The smuggler told them where to go, whom to meet, when to take a car, and when to fly. The passports worked at every checkpoint, border, and airport.

Donald Trump tweeted that the family might be terrorists: “ISIS maybe? I told you so.”

On November 17, Samer, Sara, and their two little boys walked across the Mexican border at Laredo, Texas, and turned themselves in to American immigration officials. Samer remembers, “I was so happy. I finally arrived here to have a safe life, a good life for my children.”

They didn’t realize they were stepping into a firestorm of anti-refugee hysteria. Four days before their arrival, ISIS-backed terrorists had attacked in Paris. After Samer and Sara entered the United States, the conservative website Breitbart proclaimed—falsely—that they and another Syrian family who had crossed with them were “illegal aliens” who had been “caught” sneaking into the country. Texas Gov. Greg Abbott tweeted a link to the story. Ben Carson said their arrival could be a sign that “our worst nightmare may be unfolding before our eyes.” Trump tweeted that they might be terrorists: “ISIS maybe? I told you so. we need a big & beautiful wall!” In the days that followed, more than 30 governors said they did not want Syrian refugees settling in their states.

Almost immediately after requesting asylum, Sara and the boys were put in one ICE detention center, Samer in another. They went through the extensive asylum interview process and were determined to have “credible fears of persecution or torture” in Syria. Within two weeks they were approved for release. ICE officials told Samer’s family in California to buy airline tickets for them. But the day before they were set to depart, Tashfeen Malik and Syed Farook slaughtered 14 people in San Bernardino. ICE told Samer’s family to cancel the flights to California, and Samer and Sara were denied parole. The only explanation was a vague declaration of “law enforcement interests.”

During their weeks of detention, Samer was allowed to speak to Sara only once on the phone. The boys cried every night, asking Sara where their father was. As Christmas approached, the children had been held for nearly 40 days, despite a mandate that most migrant kids should be released after three to five days. “The look on their face is a look of terror,” their lawyer, Jonathan Ryan, the executive director of the Refugee and Immigrant Center for Education and Legal Services, told me after visiting Sara at the time. “The look and the panic of a person pinned down on a hospital gurney.”

“I definitely thought America would accept me,” Samer told the Guardian. “If I had known that it was so terrible here I wouldn’t have brought my family.” On Christmas Eve, the family was finally released, reunited, and put on a flight to California.

Samer, Sara, and their two boys walked across the border at Laredo, Texas. “I was so happy. I finally arrived here to have a safe life, a good life for my children.”

That’s where I meet them two months later, in the warm and tidy apartment where Samer’s parents live. A cross hangs above the kitchen doorway. We drink tea in the living room as Samer and Sara lay out the terms for sharing their story. They’re wary: They don’t want to be back in the headlines, and they worry more press could endanger Sara’s mother and sister, still trapped in Syria. “They didn’t have a chance to leave,” she says. ISIS is still on the outskirts of their village.

They talk about life before the war, of their town—a small community speckled with trees and fields of crops. Sara doesn’t want to dwell on how the war has changed it. “The way the village looks is not important,” she says. “It is like all of Syria,” a landscape of broken concrete and twisted rebar.

Their troubles aren’t over. The asylum process, as Ryan puts it, is “designed so that people fall into the cracks, lose their cases on a technicality that would drive any sports fan nuts.”

But for now, Samer and Sara are piecing together a normal life. “My son started school,” she says, beaming. “Preschool. Just five years old, but he is a big boy. He is starting to learn English.” The boys, who have been playing in the living room, disappear into the kitchen and return proudly carrying potted flowers. “They bought this flower for their grandma,” Sara explains. Next they walk out holding a bag of peanut M&Ms with pleading eyes, grinning and squirming. They can play outside now. But not today. “It’s too windy!” Sara says with a laugh.