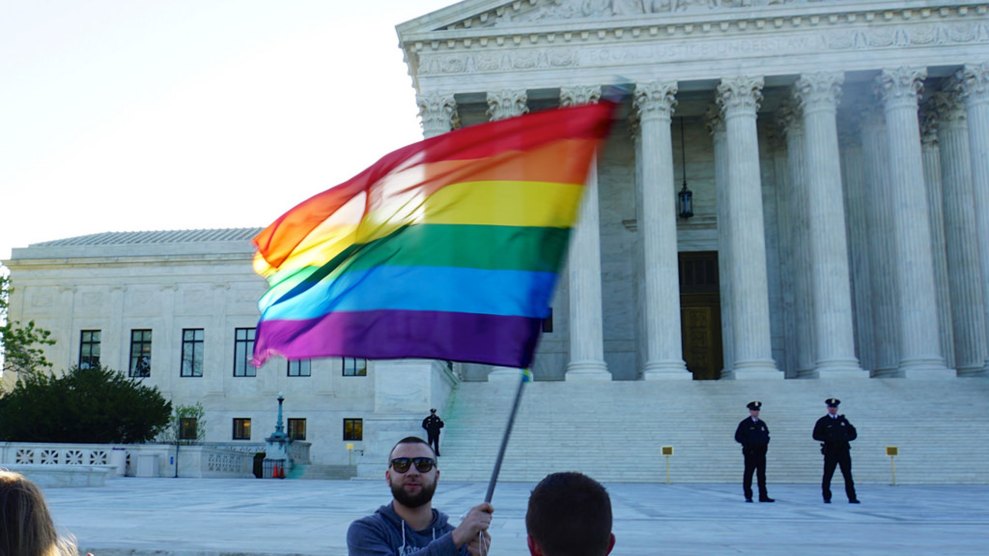 Last June, in the case of Obergefell v. Hodges, the Supreme Court issued a landmark ruling legalizing same-sex marriage nationwide. A year later, President Obama has christened Stonewall Inn the first national monument to LGBT rights, and the nation is engaged in a conversation—and new legal battles—involving transgender equality, another piece of the puzzle. I caught up with Memphis-based civil rights attorney Maureen Holland, part of the winning legal team in Obergfell, to discuss the eventful past year, the Pulse massacre, and her next big legal project.

Mother Jones: After the Obergefell ruling, there was substantial resistance, including Kim Davis the county clerk in Kentucky who refused to grant marriage licenses. Several states proposed bills that would let businesses deny services to LGBT customers on religious grounds. Were you surprised by the level of pushback?

Maureen Holland: It did not surprise me. Many southern states pushed back after the Loving [1967 interracial marriage] case was decided, so we recognized there might be resistance. But I think the pushback was overshadowed by the overwhelming support for the decision. For some time, I was continually getting comments about how many lives were positively affected.

MJ: Since then, there’s been a growing number of federal lawsuits by people alleging their civil rights were violated when they were denied marriage benefits, or fired after coming out to their employers as gay.

MH: Employment protections are the next step in the gay-rights fight. In February 2015, before Obergefell, the Equal Employment Opportunity Commission announced that its offices would accept claims from people alleging sexual orientation-based discrimination in the workplace. After Obergefell, many people believed their cases would finally be heard if they filed claims—so they did. But the EEOC has to review the claims, decide which ones it wants to take action on, deny the claim, or tell the claimant they can sue in federal court. In recent months, we’ve seen people filing lawsuits who finally got their right-to-sue letters for claims they filed right after Obergefell. I don’t know if any organization is keeping track of the number of cases.

Holland is now making the case that the Constitution prohibits discrimination based on sexual orientation and gender identity.

MJ: You’re now working on a case on behalf of a gay cop in Memphis who says he was harassed while working as his department’s LGBT liaison. You argue that workplace discrimination based on sexual orientation is covered under the Civil Rights Act’s ban on gender discrimination in the workplace. Can you explain the logic?

MJ: Which brings me to my next question: In Obergefell the Supreme Court found that gay marriage is a protected right under the Constitution, but it didn’t say sexual orientation is a protected class, like race and gender. Is there any language in that opinion that suggests your strategy will succeed?

MH: There’s language in any court opinion—called dicta—that you can draw implications from and use to extend the finding to other contexts. The dicta in Obergefell is clear: The Court adopts the idea that “psychologists and others recognize that sexual orientation is both a normal expression of human sexuality and immutable.” In my complaint for the Memphis officer, I use this and other quotes as the framework for the argument that the Obergefell ruling was not just about marriage.

MJ: This notion that sexual orientation is immutable sounds like a clear indication that it should be a protected class. The Constitution’s equal protection clause was meant to protect people from discrimination based on attributes they can’t change.

MH: Exactly. But we don’t have case law that says it with that level of clarity in regard to sexual orientation. That’s why people are bringing these cases.

MJ: Let’s pivot to transgender rights. We’re in the midst of a big national debate about that. Why now?

MH: It’s the next conversation we had to have about LGBT rights. Gender identity—what is that? What does it mean? How do our laws apply to individuals who transition? The Obergefell decision opened up space for a more national conversation.

MJ: President Obama repealed Don’t Ask Don’t Tell. His Department of Justice stopped enforcing the Defense of Marriage Act before the Obergefell decision. And 11 states are now suing his administration over bathroom guidelines it issued for transgender students.

MH: I think President Obama has become a great advocate for LGBT rights. He’s talked about his transition in thinking on same-sex marriage, and the fact that we got to see him do that openly and honestly has been helpful. He has issued executive orders that give protections based on sexual orientation and gender identity to public-sector employees. All these things speak well to his willingness to not just say it, but to do things that are meaningful to protect LGBT people.

“You want to live in a community where you don’t have to be afraid to go outside or go to work and be who you are.”

MJ: When might the Supreme Court take up the question of whether sexual orientation and gender identity are constitutionally protected?

MH: It could happen the year after next. They have to accept a case that asks the question, first. But there are a number of those moving into the Court of Appeals. It also depends on the decisions of the Courts of Appeal. The Supreme Court tends to take cases when there’s a difference in opinion in the circuits—not just because they think a case is interesting. That’s what happened in Obergefell.

MJ: I’m curious about your thoughts on what happened in Orlando.

MH: I was heartbroken. It was hard to see—as a member of the LGBT community myself—people targeted because of their identity, when a year prior we had celebrated Obergefell. No one should be targeted because of who they love, and that message needs to continue to be said, and protections need to be in place. I spoke at a vigil for Orlando here in Memphis the day it happened. The crowd came out, and I think they were afraid to be who they are because they knew they could be targeted. You want to live in a community where you don’t have to be afraid to go outside or go to work and be who you are. And that’s what I hope the future will be. We’re not there yet.