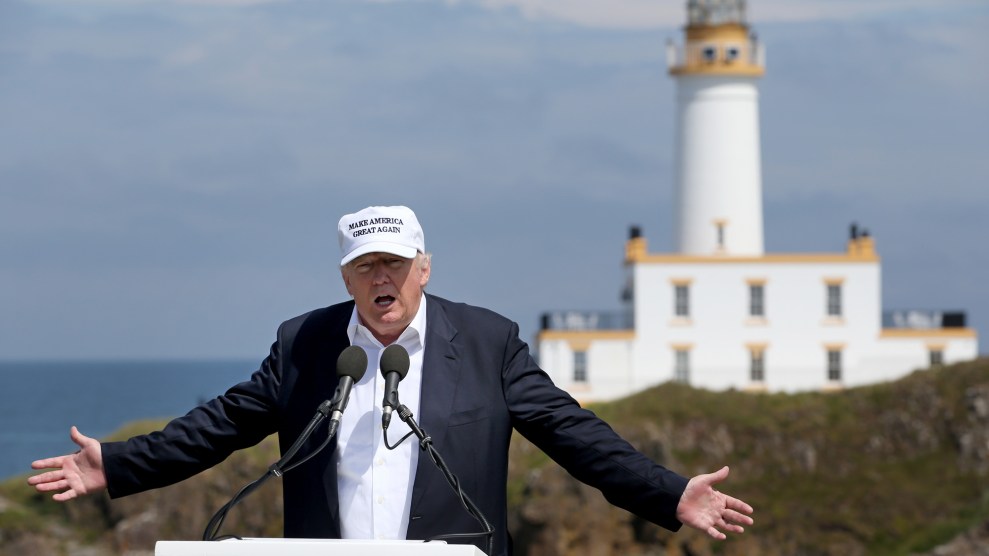 Donald Trump, who this week is in Scotland hyping his golf course there rather than campaigning in the United States, has cheered the British electorate’s decision to say goodbye to the European Union. The presumptive GOP nominee tweeted, “Just arrived in Scotland. Place is going wild over the vote. They took their country back, just like we will take America back. No games!” (Of course, he missed the key point that the Scots favored remaining in the EU, and they were going wild with despair.) He also tweeted, “Getting ready to open the magnificent Turnberry in Scotland. What a great day, especially when added to the brave & brilliant vote.” And in a Facebook post, Trump praised the UK voters for having “declared their independence from the European Union” and for voting “to reassert control over their own politics, borders and economy.” He compared a vote for Brexit to a vote for Trump, asserting that American voters “will have the chance to reject today’s rule by the global elite, and to embrace real change that delivers a government of, by and for the people. I hope America is watching.”

Trump, who recently did not seem to understand Brexit, saw this political development as a matter ripe to exploit, siding with the victorious Leave crowd against elites and the status quo. (He also exclaimed that the falling pound triggered by the vote would be good for business at his Turnberry golf resort.) But—wait for it—Trump was not always a fan of breaking apart the European Union. In fact, not long ago, he was hailing the need for European economic cohesion.

In early 2013, as part of its coverage of the Davos global conference, CNN’s website asked Trump to contribute a column addressing the global financial crisis and Europe as an investment opportunity. It identified Trump as “one of the world’s foremost investors.” And in his article, Trump waxed on about the need for international economic interdependence. He wrote:

The near meltdown we experienced a few years ago made it clear that our economic health depended on dependence on each other to do the right thing.

We are now closer to having an economic community in the best sense of the term — we work with each other for the benefit of all.

I think we’ve all become aware of the fact that our cultures and economics are intertwined… It’s a time for working together for the best of all involved. Never before has the phrase “we’re all in this together” had more resonance or relevance.

He summed it up this way: “We will have to leave borders behind and go for global unity when it comes to financial stability.”

This was, he observed, particularly true regarding Europe:

Europe is a tapestry that is dense, colorful and deserving of continued longevity and prosperity. There are many pieces that must be carefully fitted together in order to thrive.

Our challenge is to acknowledge those pieces and to see how they can form a whole that works together well without losing any cultural flavor in the process. It’s a combination of preservation along with forward thinking.

No surprise, Trump cited his golf course in Scotland as a perfect example of investment in Europe. But his larger message was that economic cohesion was necessary for global prosperity: “The future of Europe, as well as the United States, depends on a cohesive global economy. All of us must work toward [sic] together toward that very significant common goal.”

Trump was clearly an advocate of European economic cooperation, noting, “we’re all in this together.” But that was before he became a candidate crusading against the “system” who smelled a shot-term political investment opportunity. So he has dumped that grand talk of global economic cohesion and embraced Brexit. After all, this allows Trump to promote his own agenda—and his golf course.