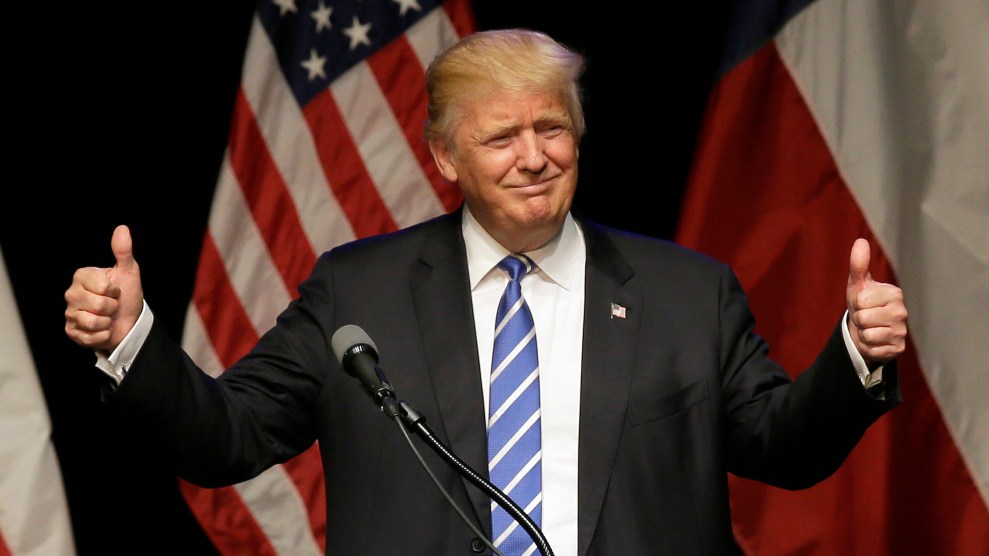 Republican presidential candidate Donald Trump arrives to speak during a rally at Gilley's in Dallas, Thursday, June 16, 2016.<a href="">LM Otero</a>/AP

Donald Trump spent most of the fall and winter mocking his primary opponents for their reliance on super-PACs fueled by deep-pocketed donors. On Twitter, he concern-trolled Robert Mercer, the billionaire hedge-funder who sunk millions into supporting Ted Cruz, and he taunted Marco Rubio as the “perfect little puppet” of Las Vegas casino owner and megadonor Sheldon Adelson. With his primary foes vanquished, Trump suddenly seems much more amenable to aid from super-PACs—which can raise unlimited amounts of money—and the high-rollers who can cut gigantic checks to them.

But now Trump has a problem. Trump and his advisers went into the race with no super-PAC game plan (which was in keeping with most other aspects of his unconventional campaign). A super-PAC is supposed to operate independently from a campaign, but in reality, it is generally created and guided by operatives close to a candidate in the months before the candidate declares an official run. So in that period, messages are coordinated, color schemes matched, and donors who fancy that candidate are told which super-PAC to finance. In Trump’s case, that didn’t happen. Consequently, a motley crew of pro-Trump super-PACs have sprouted up, each claiming to be the real Trump super-PAC. This has left some of Trump’s would-be big-money donors bewildered as to which super-PAC to trust and support. (And though Trump did boast he would finance his campaign on his own, he has been soliciting funds from outside his own bank account, with some observers contending he can not underwrite his campaign entirely on his own.) Almost everyday, new super-PACs promoting Trump are set up, but only four, so far, seem even somewhat serious.

Rebuilding America Now
Founded in early June, Rebuilding America Now is the closest thing to an authorized super-PAC. It was founded by California investor Tom Barrack who has made billions during a colorful career with an assortment of deals. He connected Saudi princes to Haitian dictator Baby Doc Duvalier to broker oil sales between Saudi Arabia and Haiti. He bought Michael Jackson’s Neverland Ranch keeping the singer financially stable toward the end of his life in exchange for putting him back to work. Barrack is a longtime friend of Donald Trump—they got to know each other when Barrack negotiated Trump’s purchase of New York’s Plaza Hotel in 1988.

Barrack is also a pal of Trump’s campaign chairman, Paul Manafort, a lobbyist who for decades has worked in the darker corners of Washington politics, representing the interests of dictators and warlords. According to Barrack, one of the two men who will be running the super-PAC is Laurance Gay, a public relations specialist and lobbyist who once worked for Manafort before going on to lobby for gambling and lottery operations. The other operative who will reportedly be running the super-PAC is Ken McKay—Chris Christie’s former campaign manager.

Barrack has claimed that Rebuilding America Now has already received commitments of $32 million, but the group doesn’t have to reveal how much money it has until July.

The super-PAC hired strategist Alex Castellanos, who has worked for the past four GOP presidential nominees. Before joining this pro-Trump effort, Castellanos was a prominent member of the #NeverTrump movement, even proposing a group called ProtectUS last fall, which would have had the mission of fighting Trump.

Great America PAC
After Trump announced his candidacy last June, a slew of super-PACs cropped claiming they backed Trump (though it was not clear how some planned to use the money they received). Many have since folded or gone dormant. But Great America PAC has remained. Known initially as TrumPAC—until the Federal Election Commission and the Trump campaign complained about the name—the group was the first super-PAC to make six-figure advertising buys on behalf of Trump. Lately, it has suffered from a revolving cast of staff. And its hires haven’t always inspired donor confidence.

The PAC was co-founded by Amy Kremer, a tea party activist who co-founded Tea Party Patriots, and Bill Doddridge, the CEO of a diamond importing business. Doddridge has so far been the largest source of cash behind the group, having loaned it $250,000. Last month, Great America PAC issued a press release listing top-tier supporters that included a smattering of minor conservative donors and Stacey Dash, the Clueless actress turned conservative activist. According to Buzzfeed, not all of the named individuals had committed to contributing; others on the list had given merely $2,500, a paltry amount in the world of super-PACs and below the amount they could give directly to Trump’s campaign.

Kremer left the group in May, shortly after its pro-Trump advocacy kicked into high gear, complaining she had been excluded from the organization’s decision-making process. One of the decisions she says she was not consulted on was the hiring of Jesse Benton, a Republican operative who is married to Ron Paul’s granddaughter. Shortly after his hiring, Benton was convicted on federal charges for his role in a scheme to pay an Iowa state senator to endorse Ron Paul during his 2012 presidential campaign. Benton is now only working for the PAC on a “volunteer” basis, according to the New York Times.

Great America PAC is particularly combative about its place in Trump world. In email blasts, the group declares itself “The Only Reputable Super PAC backing Mr. Trump” and “the official super-PAC”—even though the Trump campaign has repeatedly disavowed the group.

The Committee to Restore America’s Greatness
The Committee to Restore America’s Greatness is the most mysterious of the super-PACs supporting Trump. Founded last fall in southern California, it is now guided by a former member of Trump’s inner circle—Roger Stone, the self-professed king of political dirty tricks, who was a long-time partner of Paul Manafort at the lobbying firms they ran in the 1980s and 1990s. At the start of Trump’s presidential bid, Stone was formally advising the campaign, but he soon left the Trump team and began running the super-PAC this spring. The group seemed all but dormant until the final days of Trump’s battle with Ted Cruz for the GOP nomination. As it became clear that Cruz was aiming to defeat Trump via a contested convention, the super-PAC began collecting thousands of affidavits claiming that voting irregularities occurred in state primaries where Cruz beat Trump. The effort was funded by a six-figure donation from John P. Middleton, the executive producer of the Lego Movie and son of the co-owner of the Philadelphia Phillies. The group doesn’t appear to be active lately, but it still has more than $100,000 in the bank.

Committee for American Sovereignty
Another option for pro-Trump donors is the Committee for American Sovereignty, organized by former Ben Carson spokesman Doug Watts. Watts says his super-PAC won’t be a big-spending mega-PAC (though Watts has said they will still spend tens of millions), but will be tightly focused on voter registration and get-out-the-vote efforts—the type of behind-the-scenes grunt work that outside groups have increasingly tried to take over from cash-strapped campaigns. Watts tells Mother Jones the group has secured several million dollars in promised support and says it will raise as much as $20 million by the Republican National Convention in mid-July.

Watts points out that though Trump and his team didn’t set up his super-PAC network beforehand, his campaign’s minimal infrastructure also makes outside resources more valuable this election. “Super-PACs are not a luxury this time around,” says Watts, “they are a necessity this election.”