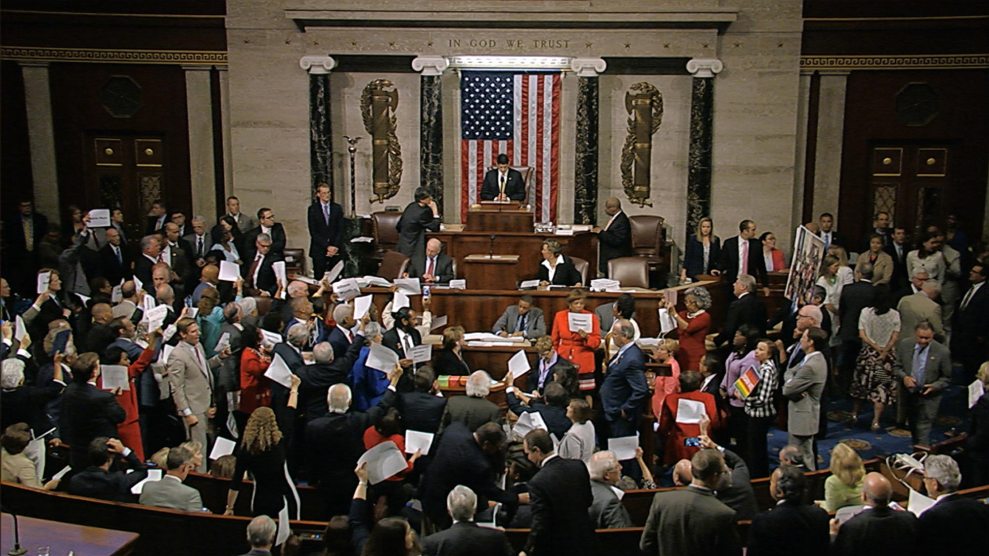 The sit-in, which has spanned more than 15 hours so far, began as an attempt to force a vote on “No Fly, No Buy” legislation, a bill that would ban the sale of guns to terror suspects. It has expanded into pushing for votes on two other measures: one that would expand background checks for gun purchasers and another that would require the Surgeon General to compile and submit an annual report to Congress on the effects of gun violence on public health.

In hours of speeches conducted sans microphone—the House’s GOP majority shut down the microphones and CSPAN cameras on the floor, leading several members to begin streaming the event on Periscope—House Dems have repeated the phrase “enough is enough.” They’re repeated how tired they are of perfunctory moments of silence after every mass shooting. Rep. Dina Titus (D-NV) called the “club of people in Washington,” who have called one of these brief, silent memorials on the House floor the club that no one wants to join. Many have told personal stories on the floor: Rep. Torres (D-CA) spoke of working as a 911 dispatcher, getting a call from an 11-year-old girl and hearing the gunshots that killed her. Rep. Raul Ruiz (D-CA), a physician, spoke of the bloody and emotional experience of treating gunshot victims in his emergency room, and then consoling their families.

There have been too many memorable moments to count, but here are a few of the stand-outs:

1) Rep. Debbie Dingell (D-Mich.) spoke candidly and personally on the House floor about her own experience with guns. Her father, who Dingell has previous said had mental health issues, once tried to shoot her mother and Dingell got between him and the gun. “I know what it’s like to have a gun pointed at me,” she said on the House floor in the early hours of Thursday morning. Her emotional speech brought House members and visitors in the gallery to their feet. You can watch a grainy video here:

2) After about 10 hours of speeches and calls on Congress to hold a vote on gun control legislation, Speaker Paul Ryan (R-WI) entered the House chamber to hold a vote…on a bill about wonky financial regulations that would help big banks. When Dems in the House realized what was going on, their chants of “No Bill, No Break” became deafening, drowning out Ryan on the microphone. At the same time, House Dems were holding up white pieces of paper printed with the names of victims of gun violence. As Ryan tried to gain control to the floor during the vote, the Dems again drowned him out, with chants of “shame” and a rendition of “We Shall Overcome,” sung with signs featuring gun violence victim held aloft. Here’s a glimpse of what it looked like, from the official CSPAN feed that briefly came on during the vote. (For the rest of this sit-in, CSPAN showed the grainy Periscope feeds of Congressmen as they streamed in real time on their cell phones.)

3) After Speaker Ryan called the House to a vote, Rep. Louie Gohmert (R-Texas) came to the House floor. As Dems sang, clapped, and chanted their continued calls for gun control legislation, again drowning out the Speaker, Rep. Gohmert approached the group of Democratic members congregated at the front of the House floor, red-faced, waved his finger, and yelled “radical Islam killed these people.” He then approached Rep. Corrine Brown (D-FL), whose district includes the Pulse nightclub in Orlando, and the two got into a heated exchange that ended when other lawmakers physically separated them.

4) Rep. Jim Himes (D-Conn.) gave a passionate speech where he recounted going to see a documentary about the mass shooting at Sandy Hook Elementary School in Newtown, Connecticut, where 20 children and 6 teachers were gunned down in December 2012. The film screening happened to be the night after the mass shooting in Orlando, and Himes recalled running into the parent of one of the young Sandy Hook victims, Mark Barden. “I knew I was going to have to answer that question that we in Connecticut have to answer every single day: What are you going to do?” Himes said. He wanted to be able to tell Barden that he would do more than call yet another moment of silence. Himes explained his frustration: “You know what we’re gonna do for you, Mark? Mark, who lost his 7-year-old at Sandy Hook? We’re gonna be quiet for 8 or 9 seconds. These 435 people which govern the greatest country in the world, we’re gonna shut up for 8 seconds. How do you feel about that?” “Horrible,” a voice on the House floor called out. “I know how I feel about that,” Himes continued: “I’m not doing that anymore.”

5) Earlier on Wednesday, Rep. Debbie Wasserman Schultz (D-Florida) came to the podium to read a letter from her friend, former Arizona Rep. Gabby Giffords, who was shot in the head by a gunman at a 2011 constituent meeting in Tucson. The gunman also killed six others.

“If these Republican cowards that runs this chamber would actually turn the microphones on, then we could all be heard a little bit louder,” Wasserman-Schultz said before reading the letter.

She recalled reading Giffords’ letter of resignation in 2012 on the House floor. While reading Giffords’ latest words aloud, Schultz began to cry. “Speaking now is difficult for me, but I haven’t been silenced, and neither should the American people,” she read, her voice shaking. Watch the full speech here: