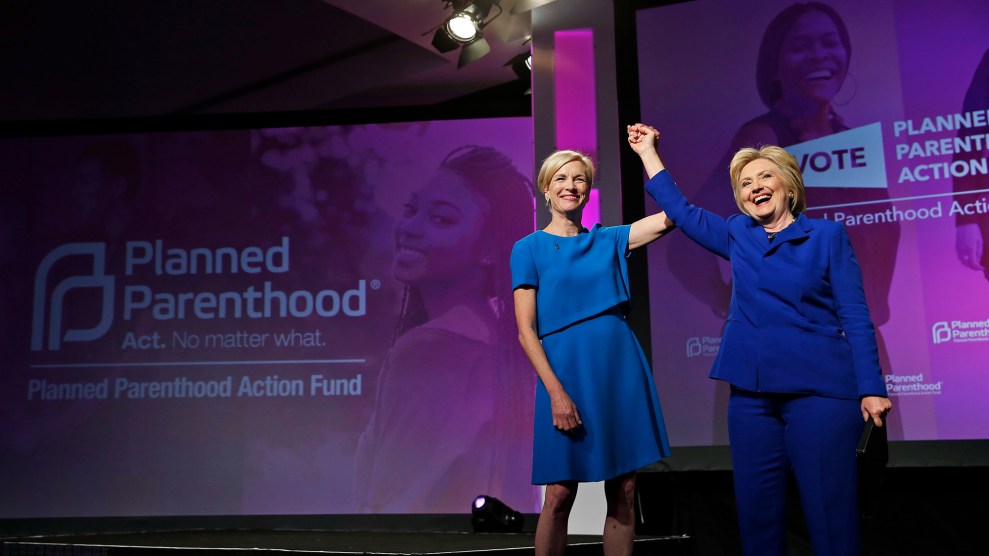 For her first general election speech, Hillary Clinton chose a venue that made a statement about her candidacy and her role as the first woman to gain a major-party’s presidential nomination. Clinton addressed the Planned Parenthood Action Fund in Washington, DC, on Friday, and offered a pointed defense of the right to legal abortion and general reproductive rights. “I’ve been proud to stand with Planned Parenthood for a long time,” she said. “And as president, I will always have your back.”

Clinton repeatedly stressed the ways access to birth control and safe abortions have boosted the nation’s women, noting that reproductive choices are essential rights that her opponent, Donald Trump, and the rest of the Republican Party, want to roll back. “Defending women’s health means defending access to abortion—not just in theory, but in reality,” she said. “We know that restricting access doesn’t make women less likely to end a pregnancy. It just makes abortion less safe. And that then threatens women’s lives.”

It was the sort of speech you wouldn’t often hear from a male politician. Clinton spoke to the crowd—mostly women decked out in pink shirts—as old friends and allies, thanking them for their assistance in the primary.

Clinton has often been criticized as a stilted speaker throughout this campaign season, but she was at ease on Friday, showcasing that she’s a stronger speaker when she ditches the broad strokes of her stump speech for a pointed address on a specific topic, ably mixing soaring rhetoric with diving into the weeds of policy. She called for investing in programs that help women obtain IUDs, repealing the Hyde Amendment, and boosting federal funding for Planned Parenthood. “Everything I have seen,” Clinton said, “has convinced me that life is freer, fairer, healthier, safer, and far more humane when women are empowered to make their own reproductive health decisions.”

Clinton raised Trump’s “Make America Great Again” slogan, pointing out that going back to a prior time wouldn’t be so great for the women in the room. “Back to a time when opportunity and dignity were reserved for some, not all,” she said. “Back to the days when abortion was illegal, women had far fewer options, and life for too many women and girls was limited. Well, Donald, those days are over.”

Trump is currently floundering among women voters in polls. A recent CBS/New York Times poll found that 60 percent of women held an unfavorable view of Trump, and NPR recently predicted that the gender gap in this fall’s vote could be the largest in over 60 years. Clinton used her speech Friday to call out Trump’s past disparaging comments about women. “This is a man who has called women ‘pigs,’ ‘dogs,’ and ‘disgusting animals,'” Clinton said. “Kind of hard to imagine counting on him to respect our fundamental rights?” She particularly singled out Trump’s statement from earlier in the campaign that women who seek abortions should be punished under the law. Trump later walked back that line, but Clinton wasn’t buying it. “Anyone who would so casually agree to the idea of punishing women—like it was nothing to him, the most obvious thing in the world—that is someone who doesn’t hold women in high regard,” she said. “Because if he did, he’d trust women to make the right decisions for ourselves.”