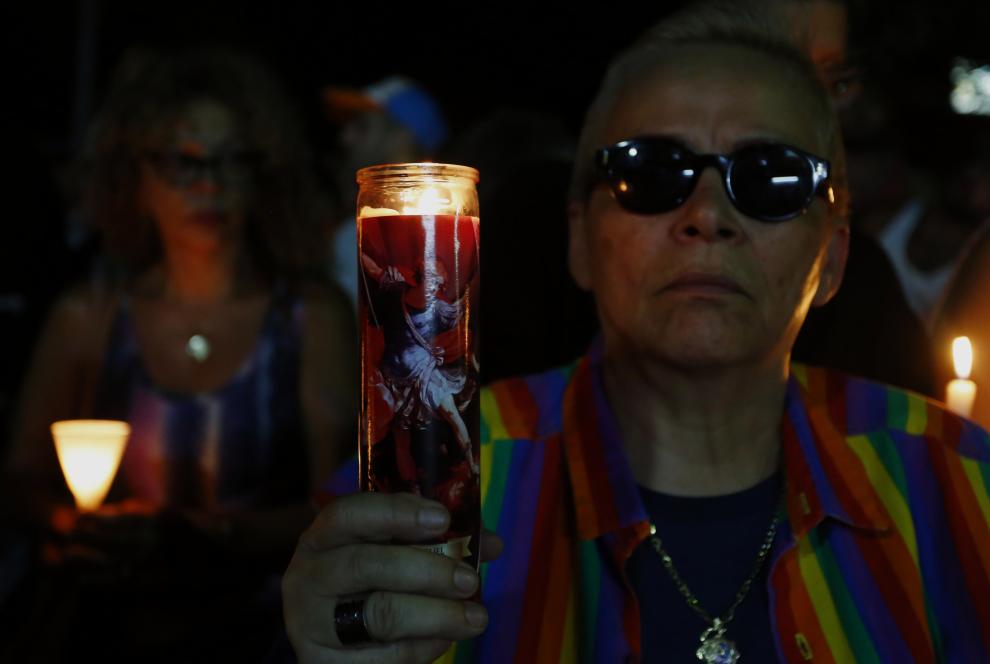 Attendees in San Juan take part in a tribute to the Puerto Rican victims of the shooting at Orlando's Pulse nighclub.Thais Llorca/EFE via ZUMA Press

As news of the June 12 shooting at the Pulse nightclub in Orlando spread, families in Puerto Rico began to receive frantic calls about their sons, daughters, siblings, nephews, nieces, and cousins who had been celebrating a Latin-themed night of music and dancing in the crowded bar. They were among the 49 people who were dead after a gunman opened fire at the club around 2 a.m.; approximately 53 others were wounded before police killed the shooter.

As many as 23 of those who died were identified as being Puerto Rican. Although it’s unclear how many were actually born on the island, many of the victims had family there. As they grapple with the unspeakable loss of loved ones, these families also face unusual challenges in the wake of the largest mass shooting in US history, from the potentially steep cost of burial and other expenses, to navigating the complex web of victims’ services as a Spanish-speaker with limited English.

Although pledges to help are coming from the government, advocacy organizations, and private companies, even those families who receive some assistance may struggle to cover all the costs, especially those with large extended families who may have wanted to fly in and support relatives in Orlando. “Once they arrive here to be able to claim the remains of their loved ones, it’s like where do they stay? How do they get from point A to point B?” said Samí Haiman-Marrero, a local Orlando business owner and a part of the core team of Somos Orlando (“We Are Orlando”) a coalition of organizations that formed after the tragedy to act as a bridge between families who need assistance and organizations that can help. They have connected families with resources that offer a variety of services, including housing, or grief counseling in Spanish.

“It’s not just parents and immediate siblings perhaps that are traveling, we’re talking about large groups of family members trying to come,” Haiman-Marrero noted. “It’s a really tight knit community and so the mourning transcends beyond the typical nuclear family.” She described one family of 25 who traveled from Puerto Rico to Orlando and needed help with housing. “I got some calls directly from Puerto Rico [asking in Spanish], ‘We’re arriving tomorrow we need a place to stay, it’s five people a baby and that’s it. We need help,’” she said.

There are also other significant issues that families are facing—some are logistical, some financial, and some are cultural. Here is an overview:

Language is a barrier: When dealing with an emergency, being able to communicate with police, officials, and other key people is essential. For some victims’ families who do not speak English and only speak Spanish, something as simple as making a call to get information about a loved one can be a struggle. “For these families to travel from Puerto Rico…to pick up the body of their son or daughter, it’s heart breaking, their hearts are in pieces,” said Pedro Julio Serrano, executive director of Puerto Rico Para Tod@s, a social justice organization for the LGBTQ community in Puerto Rico. Adding to their grief, he says, “There are language barriers and there are cultural barriers.” When Haiman-Marrero got a call from Puerto Rico from a woman seeking housing for her and her family, Haiman-Marrero made sure the services she recommended had Spanish language support. “I made sure before I even provided the information to the young lady that called from Puerto Rico” those services would be in Spanish. “I didn’t want her to be scrambling.” The assistance center set up at Camping World Stadium for those affected by the massacre had help in both languages, said Haiman-Marrero.

Families who want to bury loved ones in Puerto Rico may face hefty funeral expenses: If families want their loved ones to be buried on the island close to relatives, the process can be costly. The cost of shipping remains to Puerto Rico may include charges from the funeral home in Orlando, which would be responsible for sending the body to Puerto Rico, and additional expenses for the funeral home in Puerto Rico. Funeral services, the shipping of remains, and church services among other costs can run from $5,000 to $8,000, said Mariela Atkins, office manager at Robert Bryant Funeral & Cremation Chapel in Orlando, which provided services for three victims, one of whom was to be transported to Puerto Rico. But costs vary depending on what families desire, Atkins said. For example, the price of a casket has a broad range depending on the style, material, or size. A government victim’s compensation fund is also helping with funeral costs.

But some airlines are stepping in to help. United Airlines is providing the transportation of remains at no cost said Ida Eskamani, development officer for Equality Florida. Southwest is also providing transportation of the remains free of charge. JetBlue has offered complimentary travel for immediate family and domestic partners of victims.

Some groups are raising money to help, but funds have not yet reached the families: Equality Florida, the state’s LGBT civil rights organization, is part of the Somos Orlando coalition and has created a GoFundMe account that in the week after the shooting has raised more than $6 million. The organization partnered with the National Center for Victims of Crime to distribute funds to families. But no funds have reached victims’ families yet, said Mai Fernandez, executive director with the National Center for Victims of Crime. She explains that the organizations intended to wait to disburse funds until the pace of donations slowed and they can assess the total amount that is available for aid.

There are longstanding taboos about homosexuality in Puerto Rico: Pedro Julio-Serrano who runs the LGBT program based in Guaynabo has faced homophobia in Puerto Rico and understands a deep cultural problem that some families face. “It’s a very touchy subject, but some of the victims’ families found out that their victim was LGBT when this happened, so they will have to do deal with that,” he said. “It’s tragic that someone has to wait until they die for their family to find out that they are gay.” Some of the Puerto Rican victims moved to the U.S. mainland because they wanted to live in a environment that was more accepting of the LGBT community, he added.

Although some views about the LGBT community are slowly changing, the island’s machismo culture and strict, traditional views on gender roles are still dominant: Men should be masculine, emotionally tough, marry women, and have children. There is also a history of violence. In the 1980’s a serial killer on the island killed 27 gay men. Hate crimes have dwindled in recent years, Serrano said, but the homophobia and discrimination are still big problems. Some families are grappling with grief and must also cope with their own uncomfortable views about homosexuality.

“This [tragedy] is something that goes to the heart of who we are as Puerto Ricans,” Serrano notes. “We’re frightened, but we won’t live in fear.”