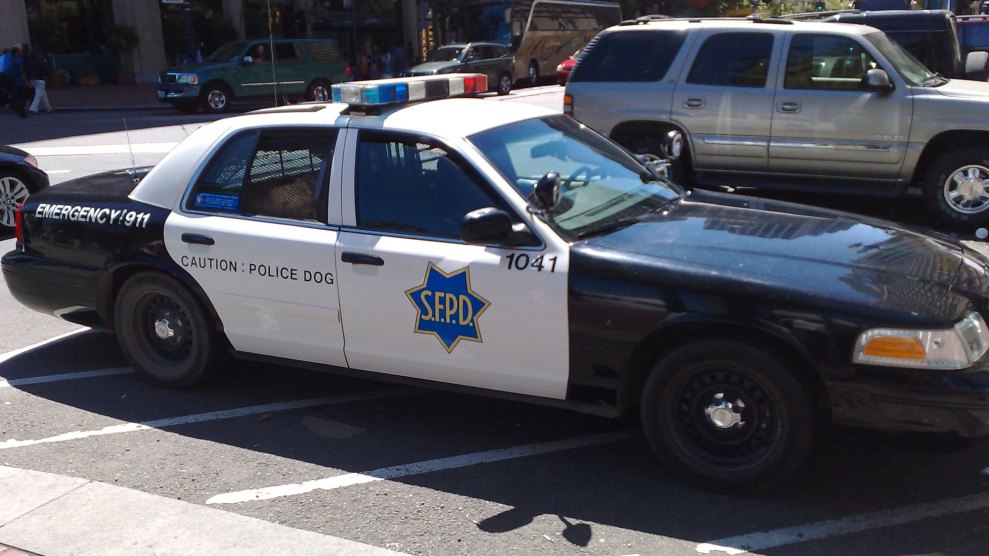 The San Francisco Police Department has faced intense criticism and growing scrutiny after two scandals involving racist texts by cops and a string of fatal officer-involved shootings, including that of 26-year-old Mario Woods. Against a backdrop of calls for reform and a hunger strike, the San Francisco Chronicle published a report in May looking at police shootings and use of force more broadly by the SFPD over the past 15 years. The Chronicle reviewed police data, medical examiner’s reports, and district attorney’s reports dating to 2000, revealing some stark findings:

“When you talk about racism in this country, we’re not exempt from that.”

Mother Jones sat down with San Francisco County District Attorney George Gascon to talk about the Chronicle’s findings, ongoing reform efforts, and morale inside the department. Gascon, who served as chief of the SFPD before becoming a prosecutor, has called for the state attorney general’s office to investigate the SFPD for discriminatory policing practices, and has advocated reform. “When you talk about racism in this country, we’re not exempt from that,” he said, referring to problems plaguing other police departments around the country. “And I think the beginning of a solution to that is to accept that we have the same problems and collectively—we as a nation need to begin to fix this problem.”

Morale among the rank and file is mixed, Gascon said. “There’s a sizeable number of people within the police department that believe that reform has to take place…There are other people that feel under siege,” he said, particularly since the firing of Chief Greg Suhr, a move which some officers believe was political.

“What is clear to me,” he added, “is that things cannot continue to be the way that they are.”

Here are some of Gascon’s specific thoughts on reform and accountability for the SFPD:

Use of Force
There have been two fatal police shootings in San Francisco thus far in 2016. Luis Gongora was shot several times in the Mission District in April after he lunged at officers with a knife, according to the SFPD. And Jessica Williams, 29, was shot once by an officer in Bayview in May while an officer tried to remove her from a vehicle suspected to be stolen.

The SFPD should adopt a use-of-force policy that requires officers to respond to physical threats with the minimum force necessary, Gascon said. Enforcing a more restrictive policy would both reduce the number of fatal police encounters and put officers at less risk of legal action for running afoul of the “reasonable force” legal standard, he said. Under current interpretations of the law, no particular weapon or level of force is more reasonable than another in responding to threats that pose great bodily harm to officers—but department leadership can draw its own line, Gascon said. “What you do is you’re modifying behavior with this line. And you’re creating a buffer, so that if you make a very restrictive policy, even if the officer violates policy, they’re still very far away from violating the law.”

Last Wednesday, the seven-member San Francisco Police Commission unanimously approved a new policy mandating that officers attempt to de-escalate conflict situations before using force against a suspect. The policy has the support of the police union and civil rights groups but still has to go through negotiations between the union and the city before being adopted.

“I believe that Tasers are another tool that should be available to officers. [But] that has to be done in the context of a very strict policy.”

The Police Commission is also considering outfitting all officers with Tasers as a way to give them less lethal options for responding to threats. The president of the police union said the shooting of Woods, who wielded a knife, could have been avoided if officers had been equipped with Tasers. Gascon called for officers to be equipped with Tasers when he was chief of police in 2010. Now he says that officers should have Tasers at their disposal, but that they shouldn’t get them until they’ve been trained in a more restrictive use-of-force policy that encourages minimum force across the weapons spectrum. “A Taser can be abused as well,” he noted. “I believe that Tasers are another tool that should be available to officers. [But] that has to be done in the context of a very strict policy.”

Accountability
Currently, the San Francisco police department leads investigations into officer-involved shootings, while the DA’s office conducts its own investigation into the shooting. Investigators from the DA’s office respond to the scene but rely heavily on the SFPD for information, which doesn’t always get passed along. “The worst-case scenario is what we’re doing today,” Gascon said. “Perhaps the only thing that could be worse than that is if we didn’t go to the scene at all.” Earlier this month, a ballot measure was passed requiring the Office of Citizen Complaints to conduct an investigation into every police shooting. Previously it only conducted investigations when a complaint was filed with the office—which rarely happened.

The SFPD can’t continue to investigate itself for shootings involving its own officers, Gascon said. Ideally, the California state attorney general’s office should investigate police shootings, he said, though that agency says it lacks the resources. Gascon has proposed creating a special division within the district attorney’s office that would be exclusively responsible for investigating officer-involved shootings. The division would consist of investigators and prosecutors who were hired and trained specifically to investigate police shootings and would not be involved in the work of the DA’s office on other criminal cases. This would build trust, he said, between the police department and the community in terms of the integrity of police-shooting investigations.

In Gascon’s view, the SFPD should also regularly publish updated information about complaints against officers and use-of-force incidents on its website every 30 days, including the numbers of each, the race of the victims, and the race, gender, and age of the officer involved.

Skeptics of Gascon’s proposal have noted that his office has never charged a police officer involved in a shooting—there have been 43 cases since he became DA in 2011; 31 are closed and 12 remain open. Gascon told Mother Jones that current legal precedent on “reasonable force” allows officers wide latitude to decide what use of force is necessary, and the bar is high for demonstrating that an officer crossed the line. That’s a key reason why the SFPD’s policy needs to be changed, he said.

But Gascon also said the public can have unrealistic expectations of how police should use force and how investigations into police conduct should be run. “The public sometimes is very influenced by what they see in movies…where police officers have this incredible marksmanship,” he said, noting that people often ask why officers don’t just shoot suspects in the leg.