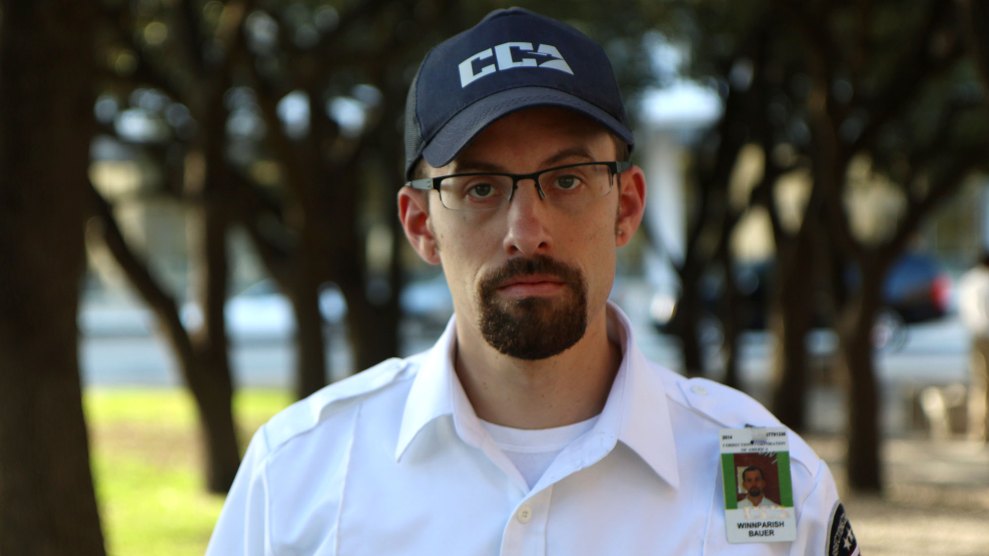 In December 2014, Mother Jones senior reporter Shane Bauer started work as a corrections officer at a Louisiana prison run by the Corrections Corporation of America (CCA), the country’s second largest private-prison company. Here, he talks about what he saw during his four months on the job and what it taught him about life inside a for-profit prison. Read his full story here.

Mother Jones: How did you get the idea for this project?

Shane Bauer: The first time I thought about it was while talking to another reporter about writing about prisons. We were talking about Ted Conover’s Newjack, about his experience working as a guard at Sing Sing. I thought, “I should try that at a private prison.” There isn’t a lot of reporting on private prisons because they are not subject to the same public records laws as publicly run prisons and it’s pretty hard for journalists to get inside them. They’re a corner of the American prison system that we don’t know a lot about. 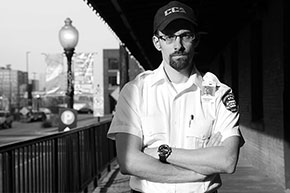 MJ: You got a job as a guard at the Corrections Corporation of America’s Winn Correctional Center in Louisiana. How hard was it to get the position?

SB: Not hard. I filled out an application online. I filled it out honestly with my real information. There was a list of prisons around the country that they needed people for. I clicked a handful of them, and within a couple weeks I was doing phone interviews and getting job offers. One reason I picked Winn was because it was in Louisiana. Louisiana has more prisoners per capita than anywhere in the world. It seemed like killing two birds with one stone, getting inside a Louisiana prison and a CCA prison. Winn was also the oldest medium-security private prison in the country.

MJ: When you got to Winn, what was your training like?

SB: I went through four weeks of training. We did some physical training, very little, and watched some videos. We were tear-gassed. Generally, somebody would get in front of the class and read from a book on policies like the use of force. A lot of it was spent sitting in the classroom doing nothing because there often weren’t teachers. There were whole days where the cadets would just sit and talk to each other. Maybe we’d have an hour or two of training. I really began learning the job once I started work.

MJ: You were assigned to a unit called Ash. What was your job there?

SB: Ash was a unit of eight dorms. Each dorm had up to 44 men in beds lined up right next to each other in one giant room. The inmates would go out to eat, and sometimes they would go out to a small yard for recreation. But most of the prisoners were in there almost the whole day. So there was a lot tension. A lot of people were frustrated at being stuck in there all day. I was a floor guard. It was just me and one other guard managing these 350 prisoners.

“I was a floor guard. It was just me and one other guard managing 350 prisoners.”

MJ: Shortly after you got to Winn, one prisoner told you that “Inmates run this bitch.” What did he mean by that?

SB: I think he meant that the prison administration didn’t have control over the prison. He and other inmates talked about the way Winn was run like it was a joke. I would ask prisoners who’d been to public state prisons how it compared and they would commonly say there’s was no structure there compared to other places.

MJ: What kinds of things did guards do to get by and make the best of the situation?

SB: Guards would rely on inmates to fill in the gaps since there weren’t enough guards to do all the things that we needed to do. Sometimes inmates would stand outside of a unit and warn us if higher-ups were coming. There was one corrections counselor who had a couple of inmates that she would use as bodyguards because she worked in an office where there weren’t security cameras. Sometimes we had to give out call-out passes—passes for prisoners to go places like school or the gym—and a lot times we would just give them to a prisoner to hand out.

MJ: How did Winn handle medical care and mental health care for prisoners?

SB: Prisoners regularly complained about medical care at Winn. I met a prisoner who had no legs and no fingers. He had lost them within the past year to gangrene. His medical records showed that he had made at least nine requests to see a doctor in that time. He would go to the infirmary and get sent back; the staff was suggesting that he was faking it. He said he showed the warden his feet, which were turning black and dripping with pus. But CCA had to pay to take a prisoner to the hospital, which costs a lot of money, especially when you consider it made $34 a day for each prisoner.

There was one full-time social worker for 1,500 inmates at Winn, and a part-time psychiatrist and part-time psychologist. The social worker said they typically would get to see any given inmate once a month. Another option available for prisoners with serious problems was suicide watch. If a prisoner said he was suicidal, he would get put on suicide watch, which essentially is a solitary cell.

MJ: Toward the end of your time at Winn, the state Department of Corrections (DOC) stepped in and temporarily took over the prison. Why’d that happen and how did things change when the state came in?

SB: Right about when I started working there, a prisoner escaped. Then there were a lot of stabbings and the state started paying attention to what was happening at Winn. Then there was another rash of stabbings. Some buses showed up one day with guards and wardens from public prisons around Louisiana, and they took over. The message seemed to be, “We’re gonna need to show you how to run this prison.” Everything felt different when they were there. The prisoners reacted really differently to them. Normally there was a constant testing of boundaries with the guards, but when these DOC guards came in, they’d say something and everyone did it.

MJ: Why did you quit your job as a guard?

SB: I had recently been offered a promotion. Shortly after that, my colleague James West came down to shoot some video for the story. One night he was filming the prison and he was spotted by a guard. A checkpoint was set up and he was arrested. When he got out about 24 hours later, we packed up and took off right away, and a few days later I called in and resigned.

“Even though I went there as a journalist, I got swept up in the mentality of being a guard.”

MJ: After you left, you obtained some documents from the DOC that mentioned the concerns they had asked CCA to address at Winn. Did those echo what you had seen there?

SB: Yeah. The DOC outlined many things that I saw and wrote about—about there not being enough staff, either security staff or medical staff. There were also some things that surprised me: The state said CCA had charged inmates for state-supplied toilet paper and toothpaste and even charged them to use toenail clippers.

MJ: What happened at Winn after you left?

SB: A few weeks after I left, CCA said it would be giving up its contract for Winn. Then it was taken over by another company called LaSalle Corrections. A lot of the same prisoners and staff are still there.

MJ: A big part of your story is how being a prison guard affected you. What did your experience teach you about what it’s like to be a corrections officer?

SB: Even though I went there as a journalist and my main intention was to report on the prison, I got swept up in the mentality of being a guard. I felt in danger a lot of the time, so I was constantly trying to figure out how to manage prisoners. At first I tried to be on good terms with them. Later, I tried to show them they couldn’t push me around. I quickly felt like I was hardening.

As far as what it taught me about being a guard, it’s hard to generalize because you have guards in places like California who are unionized and make a lot more money and have more power in their facilities. Winn was the other extreme, where guards were making nine bucks an hour and didn’t have anything but a radio to protect themselves or break up fights. From what I experienced, it was a pretty crazy job, especially if you’re living off of $9 an hour.