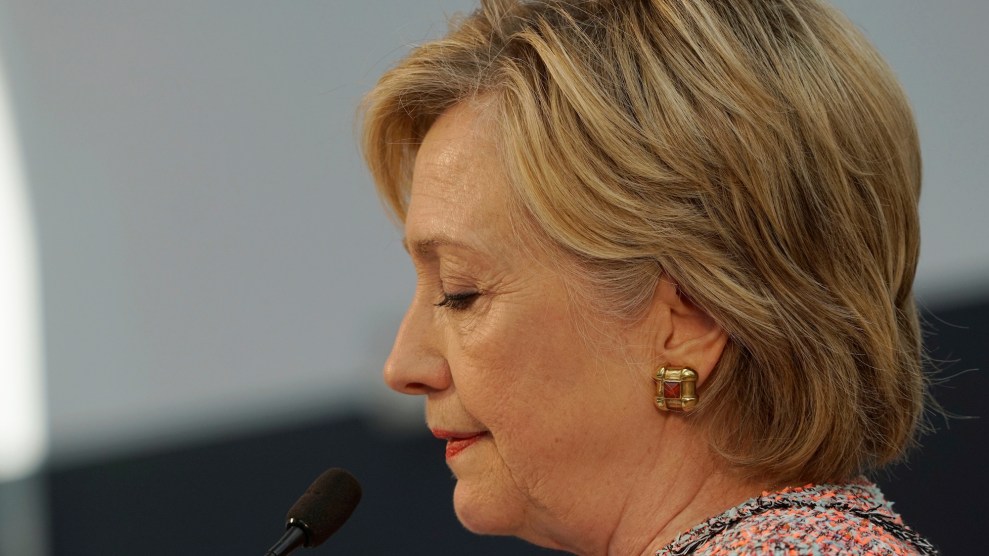 There will never be an end to Hillary Clinton email controversy.

In an unprecedented public statement on Tuesday morning, FBI Director James Comey, who started his career in government law enforcement as a Republican-appointed US attorney, declared that his bureau had concluded—after a painstaking investigation of Clinton’s handling of her emails when she was secretary of state—that no criminal charges ought to be brought in the case. He noted that the final call was up to career prosecutors in the Justice Department. No doubt, the FBI’s recommendation will carry much weight in any further deliberations.

Comey revealed that the FBI had found no evidence of “intentional” wrongdoing: no destruction of emails for nefarious reasons, no purposeful attempt to skirt classification rules, no effort to hide information from the public or investigators. (And nothing about Benghazi.) And he went on to say:

[O]ur judgment is that no reasonable prosecutor would bring such a case. Prosecutors necessarily weigh a number of factors before bringing charges. There are obvious considerations, like the strength of the evidence, especially regarding intent. Responsible decisions also consider the context of a person’s actions, and how similar situations have been handled in the past.

In looking back at our investigations into mishandling or removal of classified information, we cannot find a case that would support bringing criminal charges on these facts. All the cases prosecuted involved some combination of: clearly intentional and willful mishandling of classified information; or vast quantities of materials exposed in such a way as to support an inference of intentional misconduct; or indications of disloyalty to the United States; or efforts to obstruct justice. We do not see those things here.

So that’s the good news for the Clinton crowd. Unless the DOJ prosecutors disregard the FBI recommendation, Clinton is in the clear, legally speaking. All the talk of her facing an indictment—which was always uninformed speculation—goes poof. (This case is a reminder that not all bad government conduct is illegal.)

But the squabbling over the Clinton emails isn’t done. Comey reaffirmed that the FBI had found serious problems with Clinton’s email arrangement. One hundred and ten emails (of the 30,000 work-related emails Clinton turned over to the State Department after leaving) contained classified information at the time they were sent. Eight email chains contained Top Secret material. And the FBI discovered several thousand work-related emails that had not been part of the group Clinton returned. The bottom line: Clinton and her aides “were extremely careless in their handling of very sensitive, highly classified information.” (Comey added that “the security culture of the State Department in general, and with respect to use of unclassified e-mail systems in particular, was generally lacking in the kind of care for classified information found elsewhere in the government.”)

And it gets worse. Comey noted that the FBI found no “direct evidence” that Clinton’s emails were hacked. But he added, “We assess it is possible that hostile actors gained access to Secretary Clinton’s personal email account.”

To sum up, she and her team were sloppy, if not reckless, and perhaps exposed US secrets and her internal deliberations to other nations or outside groups. This is hardly a reassuring finding.

Consequently, each side in the Clinton wars can walk away with ammunition from Comey’s remarks. The Clinton people can contend that the controversy is over, she has been cleared, and it’s time to move on. Her foes can say she engaged in irresponsible action that potentially threatened national security (and, of course, they can claim that the well-regarded Comey is now part of a conspiracy to protect her).

It’s not likely that the email fuss will go away. Presumptive Republican nominee Donald Trump and his minions will not stop pointing to the matter as evidence of Clinton’s supposed crookedness—and the right-wing calls to imprison her will not be silenced. (There’s too much money to be made off “Hillary Clinton for Prison 2016” T-shirts.)

The blame for the scandal—or scandalette—remains with Clinton and her team. It was a dumb move for her to use private email servers—especially when she and her aides could have assumed that Clinton, as a potential presidential candidate, would face greater scrutiny. And when her attorneys destroyed 30,000 or so emails they deemed personal before turning over the rest to the State Department, they guaranteed this matter could never be fully settled, because her critics could always charge that incriminating material had been erased to protect her.

The email controversy will not now be deleted. It is too good of an attack line for Clinton’s opponents, especially Trump. Only Election Day results can put this matter to rest. Then again, maybe not.