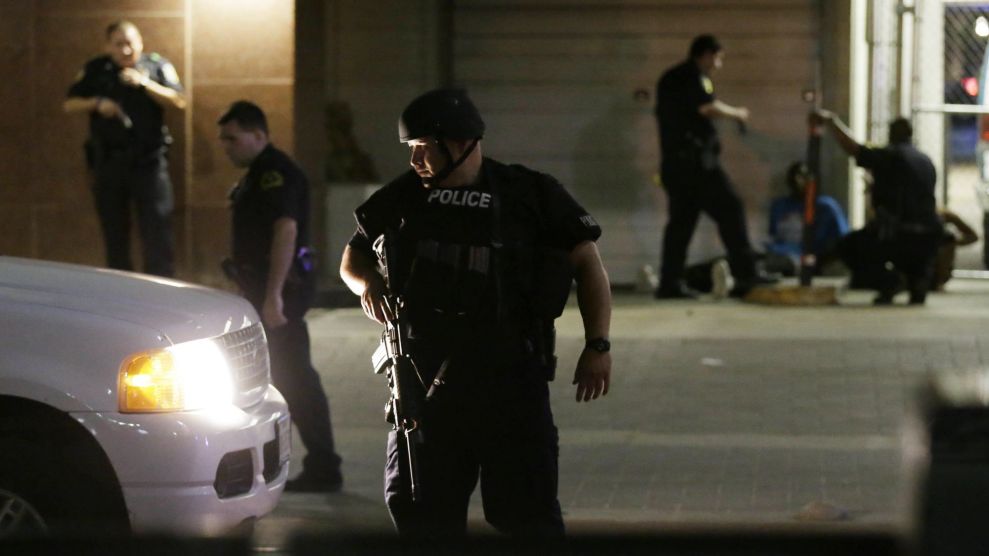 Update, July 8, 8:43 a.m. ET:  Dallas Police Chief David Brown confirmed a suspect is dead after the police sent in a robot with a bomb that detonated and killed him. Brown said the suspect had made statements expressing anger with Black Lives Matter and police shootings.

“He said he was upset about the recent police shootings, upset at white people, he wanted to kill people, especially white officers,” Brown said in a press conference with Dallas Mayor Mike Rawlings. “The suspect stated that he was not affiliated with any groups, and he stated that he did this alone.”

“We do not feel much support most days,” Brown continued. “Lets not make today most days.”

Update, July 7, 1:46 a.m. ET: The Dallas Police Department said officers were negotiating with a suspect who was posted in a garage and who had exchanged gunfire with authorities. The police have taken other suspects into custody. Police Chief David Brown emphasized “we don’t have a complete comfort level that we have all the suspects.”

A shooter opened fire near the end of a peaceful Black Lives Matter protest in Dallas Thursday night, killing four police officers and injuring seven other officers, according to the Dallas Police Department. Three of those injured are in a critical condition, and two are in surgery. One of the deceased was an officer with Dallas Area Rapid Transit, the city’s transport agency; three others were Dallas Police Department officers.

According to the police, the snipers took positions above the crowd, which gathered to mark the deaths of Philando Castile and Alton Sterling. Chaotic live footage from the downtown scene shows police and SWAT teams in a tense police operation.

Police in tactical gear carrying riot shields descended after at least 20 shots boomed loudly in quick succession, audio that was captured by eyewitness video and posted to Twitter.

This week, Castile and Sterling, both black men, died in police shootings. Castile was shot during a traffic stop in a Minneapolis suburb Wednesday night, while Sterling was shot during an altercation with the police outside a convenience store in Baton Rogue, Louisiana, on Tuesday.

According to the Dallas Morning News, hundreds attended a peaceful rally Thursday afternoon. Protesters were heading home when they first heard the gunfire.

Stacey Brown, 30 and Bianca Avery, 34, were standing near Dealey Plaza, according to the newspaper.

“This was peaceful. This was peaceful,” Brown told the Morning News. “We were headed back to our cars to go home. But we turned that corner [at Main Street] and all hell broke loose.”

“I heard a shot and all of a sudden people are running…children everywhere, everything,” Avery said.

Earlier on Thursday, before the Dallas shootings, President Barack Obama released a statement saying “all Americans should be deeply troubled” by the recent gun violence.

“We’ve seen such tragedies far too many times,” the president wrote in a Facebook post. The shootings are not isolated incidents, Obama said, but “are symptomatic of the broader challenges within our criminal justice system, the racial disparities that appear across the system, year after year, and the resulting lack of trust that exists between law enforcement and too many of the communities they serve.”

This breaking news story will be updated as we learn more details.