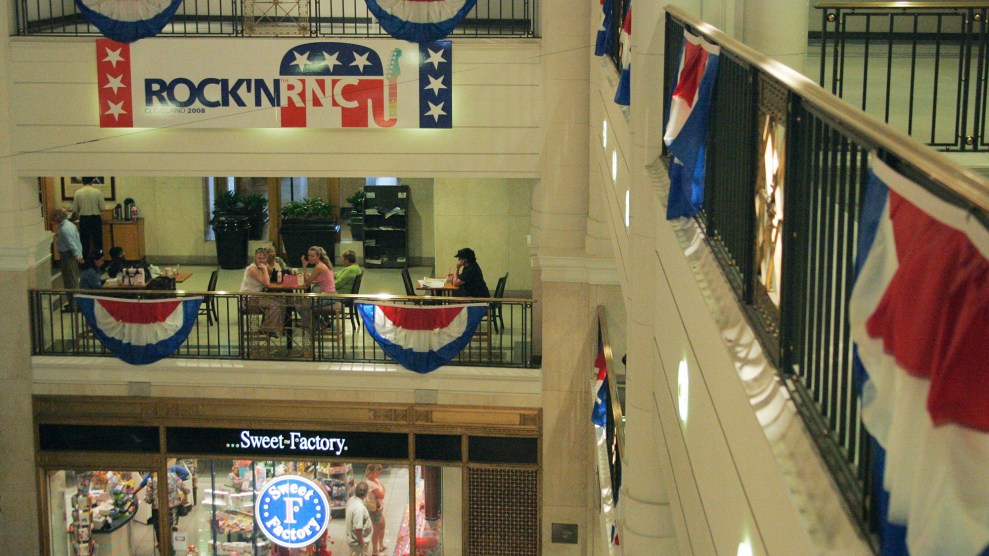 Cleveland's Tower City Center is decorated for the impending visit of the Republican Convention site selection committee in 2006.Mark Duncan/AP

Rachel Hoff, a delegate to the Republican National Convention from the District of Columbia, begged her fellow delegates drafting the party’s platform in Cleveland this week to recognize the LBGT victims of “radical Islamic terrorism.” No such luck.

The issue arose when a delegate from Rhode Island, Giovanni Cicione, proposed language that specifically noted terrorists’ targeting of LGBT people. Other delegates quickly suggested adding “Christians, Jews, and women” after LGBT. Hoff, who is a lesbian and had introduced a similar amendment in a subcommittee, spoke in favor of these changes.

“This is about standing up for the basic human rights of gays and lesbians—in this country and around the world,” she said. “If you do support me and people like me, then can you not at the very least stand up for our right to not be killed along with these other groups by people who want to bring harm not only to our country but to people based on their identity?”

She continued, “We saw that in the terrorist attack in Orlando—it was one month ago today—that was a targeted attack on the LGBT community for simply living in freedom as who they are. And it’s important that we as a party—that you stand with me now, that you stand up for basic human rights [for] the LGBT community, Christians, Jews, and women.”

Most of her fellow delegates disagreed. The language pertaining to “LGBT individuals, Christians, Jews, and women” was struck and replaced with a condemnation of “the brutal assault on all human beings.”

This is not the first time Hoff has tried to get her party to be more inclusive toward LBGT people. On Monday, Hoff, who is the first openly gay Republican to sit on the GOP’s platform committee, put forward language calling for a “thoughtful conversation” on same-sex marriage. “We’re your daughters, your sons, your neighbors, colleagues, and the couples you sit next to you in church,” Hoff said, close to tears. “Freedom means freedom for everyone, including for gays and lesbians.” That amendment was shot down by the platform committee, but it appeared to get enough support to put it to a vote before the full convention for next week.