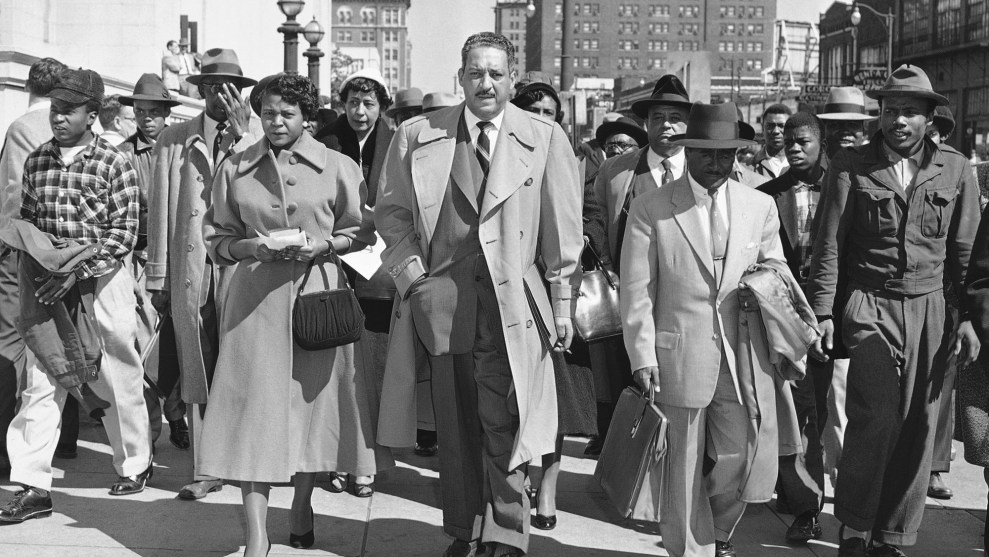 What do billionaire brothers Charles and David Koch have in common with civil rights pioneers of the 1950s? More than you might think. At least according to US District Judge Manuel Real. In an April 21 ruling, he said billionaires in the 21st century, just like civil rights workers 60 years ago, face threats of harassment from those who disagree with their views and should therefore be entitled to privacy when it comes to disclosing certain kinds of information to the government.

In 1956, when Alabama was the scene of bus boycotts, lynchings, and a burgeoning civil rights movement, state Attorney General John Patterson sued the NAACP for failing to file papers that were required for “foreign corporations” to do business in the state. The NAACP was based in New York and had considered itself exempt from that requirement. During the course of the litigation, a state court, acting on the Alabama attorney general’s motion, ordered the NAACP to produce its membership list, which the group, fearing for the safety of its members, refused.

The civil rights organization was held in contempt and fined $100,000 for failure to produce the information, and when it appealed the judgment, the Alabama Supreme Court denied it a hearing. The case went up the US Supreme Court, where the NAACP’s lawyer argued that the civil rights group withheld the list because “violence and bloodshed have been predicted by high state officials if segregation is ended.” He cited a yearlong series of bombings and shootings of black leaders around an ongoing bus boycott and desegregation efforts. He continued, “Threats and actual acts of violence have been directed against Negros [sic] who seek to assist their constitutional rights as well as against whites who seek compliance with the law.”

On June 30, 1958, the court ruled unanimously in the NAACP’s favor, and NAACP v. Alabama is considered to be a landmark decision in civil rights law. Justice John Harlan noted that the NAACP had made “an uncontroverted showing that on past occasions revelation of the identity of its rank-and-file members has exposed these members to economic reprisal, loss of employment, threat of physical coercion, and other manifestations of public hostility.”

The NAACP had made “an uncontroverted showing that… revelation of the identity of its rank-and-file members has exposed these members to economic reprisal, loss of employment, threat of physical coercion, and other manifestations of public hostility.”

Fast-forward to the 21st century, when a number of political organizations including so-called “dark money” groups—made possible by the 2010 Citizens United v. Federal Election Commission decision—have invoked the NAACP v. Alabama case in court, in press releases, and in the media as justification for keeping their donors secret. The case is being trotted out in California and Delaware, in another case relating to a nonprofit in Colorado, and in a dispute that involves a social welfare nonprofit, among others, fighting a disclosure law in Utah. In 2013, the Tea Party Leadership Fund asked the Federal Elections Commission whether it could avoid disclosing its donors because of “a reasonable probability of threats, harassment, or reprisals from government officials or private parties.” (The FEC, as it often does, deadlocked on the question—twice.) The Koch brothers’ dark-money group American Commitment, which has spent more than $2 million on political expenditures supporting or opposing candidates since 2012, was adamant that the Center for Public Integrity use this quote when asked in 2014 about its donors: “We agree with the Warren Court’s landmark 1958 ruling in NAACP v. Alabama that protecting the privacy of our members is critical to their core First Amendment rights of free speech and free association.”

So how did this venerable civil rights case become the go-to point of reference for leaders in the conservative movement, including the Koch brothers and Karl Rove?

The case has been resurrected thanks to the dark-money boom. In the 2006 election, less than $5.2 million was spent by nondisclosing nonprofits, according to the Center for Responsive Politics. That amount grew to well over $300 million in the 2012 presidential cycle. Consider two separate organizations run by billionaire brothers Charles and David Koch: Americans for Prosperity Foundation and Americans for Prosperity. The 501(c)(3) Americans for Prosperity Foundation is prohibited from paying for advertising that attacks or supports a candidate, and it is this group that has also invoked the NAACP precedent with great success. Donations to that organization are tax deductible. In contrast, a “dark money” group, its sister organization Americans for Prosperity, is organized as a 501(c)(4) “social welfare” organization and can pay for political advertisements. Thanks to the Citizens United decision, it can use corporate money to do it. Donations to social welfare groups are not tax deductible so that means the names of those who donate do not need to be disclosed.

These two organizations are a test case in the interplay between dark-money groups, charitable organizations, and the use of the NAACP civil rights ruling. They share the same address, phone number, receptionist, and spokesman. The foundation’s 2014 tax return reveals that the sister group is more than 35 percent controlled by the foundation, but the dark-money group pays the foundation millions of dollars for unspecified “services,” from donors who remain secret.  In 2011, the Americans for Prosperity Foundation refused to turn over a list of its donors, their addresses, and contribution amounts to the California state attorney general, who had requested the information as part of the state’s basic filing requirement for charitable organizations to help guard against fraud. The state does not release donor lists to the public, but there have been instances where some online filings by nonprofit corporations inadvertently included the IRS “Schedule B” donor list and became temporarily viewable.

In December 2014, Americans for Prosperity Foundation asked US District Judge Manuel L. Real for an injunction that would allow it to keep its donor list secret, citing a threat to its First Amendment rights. It presented evidence of “serious and often horrific” threats against Charles and David Koch, wrote Mark Holden, senior vice president and general counsel for Koch Industries in a statement filed with the court. One tweet, for example, stated, “I say we kill the Koch brothers and their entire family line.” Lawyers for the foundation used the NAACP v. Alabama case as justification for withholding the list of names and donors. According to a preliminary transcript of the trial, the foundation’s lawyer Derek Shaffer said, “For some 50 years, Your Honor, since the Supreme Court in 1958 upheld the right of the NAACP to resist compulsion by the state of Alabama of its membership list, courts have recognized that the First Amendment protects against this sort of compulsion in this sort of circumstance.”

Judge Real granted the injunction and noted in his ruling that AFP Foundation, its employees, and supporters “face public threats, harassment, intimidation and retaliation once their support for and affiliation with the organization becomes publicly known.” He also acknowledged that “although the Attorney General correctly points out that such abuses are not as violent or pervasive as those encountered in NAACP v. Alabama or other cases from that era, this court is not prepared to wait until an AFP opponent carries out one of the numerous death threats made against its members.”

Then there is the case involving one of the biggest and most active of the “dark money” groups, Crossroads GPS, a 501(c)(4) social welfare nonprofit co-founded by Karl Rove, once an adviser to former President George W. Bush. In the 2012 election alone, the group made $71 million worth of independent political expenditures that promoted or slammed candidates. More than $15 million directly targeted President Barack Obama, who was seeking reelection. In an interview on Fox News in April 2012, Rove explained how conservatives have seized on the NAACP case in framing their arguments against increasing pressure to disclose donors by those who “want to intimidate people into not giving to these conservative efforts.”  He continued, “I think it’s shameful, I think it’s a sign of their fear of democracy. And it’s interesting that they have antecedents, and those antecedents are a bunch of segregationist attorney generals trying to shut down the NAACP.”

Rove explained how conservatives have seized on the NAACP case in framing their arguments against increasing pressure to disclose donors by those who “want to intimidate people into not giving to these conservative efforts.”

This all strikes Bernard Simelton, current president of the Alabama State Conference of the NAACP, as a bit of a stretch. In an interview with the Center for Public Integrity, he explained what the stakes were in Alabama 60 years ago. “If the state had these rosters, they would turn them over to the employers and organizations like the Ku Klux Klan, and people’s lives would be threatened and endangered as well as their jobs,” he said. But today, “to use the justification that they’re using…it really devalues the importance of what was going on back then,” he said.

“Depending how it can be used, it can be offensive,” said Larry Noble of the Campaign Legal Center, of the argument. “It tends to minimize what true harassment really is. What happened in the NAACP case is very, very different. People were being shot at, being killed, offices being destroyed.”

Though the differences may be striking, that does not undermine the success of the strategy. Even the US Chamber of Commerce, a 501(c)(6) trade organization that pays for ads but does not reveal its donors, has used the NAACP case argument to block attempts at disclosure. For example, the DISCLOSE Act would have required increased disclosure for corporations and labor unions. The bill, which has never made it through Congress, was the subject of intense lobbying by the business league. The chamber wrote that the 2012 version was “designed unconstitutionally to encourage retaliation against certain speakers who have unpopular or unfavorable political views by requiring groups to disclose the names and addresses of their donors.”